In Karin Tidbeck’s THE MEMORY THEATER (Pantheon, 240 pp., $25.95), Dora and Thistle are children surviving together in a timeless place called the Gardens, where horrifically cruel lords and ladies live in an eternal twilight and torture their stolen child servants for sport before eventually killing and eating them. Thistle is trapped there by the theft of his name; Dora is trapped by a bad bargain and her devotion to Thistle. They love and protect each other like siblings, as best they can. But one day Thistle’s mistress — the especially vicious Augusta Prima — finds a timepiece in the woods, and sets off a chain of events that will see her and the children tumbling through realms and ever stranger stories.

“The Memory Theater” is exquisite and astonishing. The prose has a sculpted precision, every sentence both tense as a watch spring and serene as a mountain. Tidbeck skips from horror to wonder to humor like a stone skimming water, and is equally nimble in managing characters; each one steps onto the page fully formed no matter how minor the role. There is Ghorbi, a mysterious trader and traveler; Pinax, an archivist who treats friendship with great solemnity; Nils Nilsson, a man hidden inside himself. And there is the Memory Theater, wheeled and wonderful, with its Director, Journeyman, Apprentice and others, who enact the many dramas of the world while traveling through a cosmological “backstage.”

The tragedies at the book’s heart — the agonizing losses, the senseless cruelty — are somewhat mitigated by their parallels to folk and fairy tales, which offer the benefit of a certain distance; a murder is less appalling when encountered in a ballad, pinned into place by a refrain. 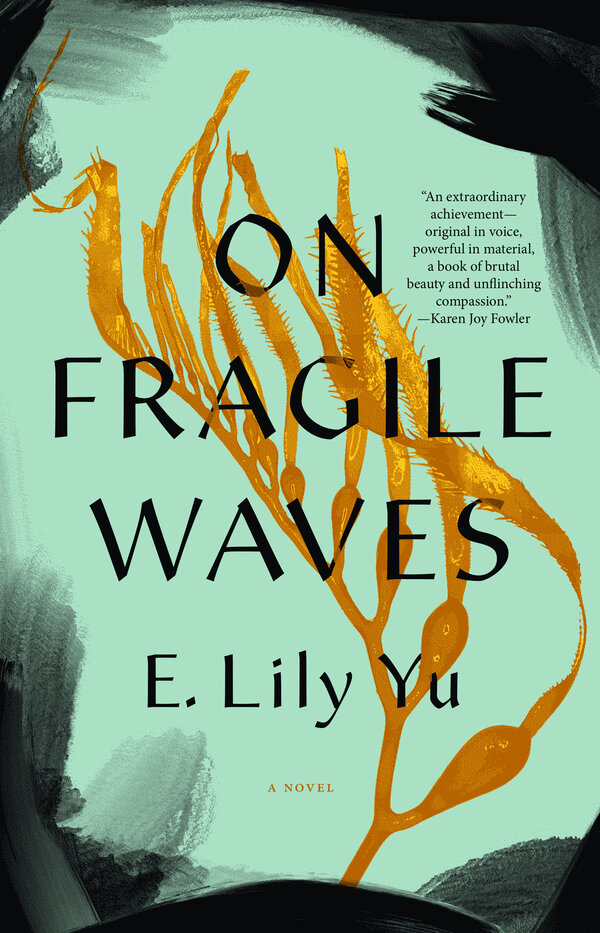 E. Lily Yu’s ON FRAGILE WAVES (Erewhon, 288 pp., $25.95), however, offers no such consolation. It is often focused on the insufficiency, the flimsiness of narrative as a comfort in the face of adversity, and probes how easily stories can curdle into nightmares.

“On Fragile Waves” circles another sister and brother, Firuzeh and Nour, fleeing Afghanistan with their parents in hope of reaching Australia. Their parents tell them stories to make the voyage bearable, casting themselves as adventurers on a grand journey. But while tales of Rostam and Rakhsh carry them out of Afghanistan, across Pakistan and Indonesia and through a typhoon, all stories wither in Nauru, where the family is detained at its Regional Processing Center with hundreds of other asylum seekers for months on end. There, the ghost of a drowned girl begins keeping Firuzeh company, for better or for worse.

This is Yu’s first novel, but you’d never know it from the surety of her approach, the immensity of what she achieves. She shifts perspectives and doesn’t differentiate narration from dialogue, an effect that quiets voices and lends volume to thoughts. Throughout, Yu explores the impulse toward storytelling, its capacity for cruelty as well as consolation; Firuzeh needs her drowned girl, but also needs to let her go.

“On Fragile Waves” is a tremendous and almost unbearable work of witness. It is devastating and perfect. It neither flinches from the horror of detention nor fetishizes it. Yu never lets us look away from the vicious banality of evil, leaving us to ask why we allow it to thrive, when it would be so much simpler to do good by one another. It hits especially hard now, as Britain considers adopting Australia’s offshore asylum measures even as Australia is finally dismantling them.

If you find yourself feeling like a scoured salt flat in the wake of those two books, Charlie Jane Anders’s VICTORIES GREATER THAN DEATH (Tor Teen, 288 pp., $18.99) will refresh and rehydrate you. Funny, tender, vivacious, it focuses on saving the universe by making friends and fighting fascists.

Anders’s heroine is Tina Mains, an ordinary American teenager with a cosmic rescue beacon implanted in her collarbone. Secretly the experimental clone of a brilliant alien tactician named Thaoh Argentian, Tina has spent her life disguised in human DNA, waiting for the mother ship to call her back and flood her with Captain Argentian’s memories before giving her a lead role in a galactic war. Tina is cleareyed on Earth, standing up to school bullies and picking fights with misogynist internet provocateurs — but once her beacon activates and she and her best friend, Rachael, find their way to outer space, things become a lot more complicated.

This book bubbles over with charisma. Tina’s voice is furiously buoyant even when she’s miserable, often course-corrected by the wry observations of her fellow teenage Earthling geniuses who make up the book’s beautifully diverse core ensemble. Anders uses humor like citrus in a fruit pie, cutting moments that threaten to become saccharine with sharp, hilarious twists.

“Victories Greater Than Death” is the first book of a trilogy, but perfectly enjoyable on its own. It’s a book of conversations and consent, sweet crushes and respected boundaries. If this seems odd in the context of a galactic war, the whole book is an argument about why it shouldn’t be; compassion and empathy are ostensibly what Tina and her friends are fighting for, pitting the jewel tones of their complexity against a pale and violent sameness.