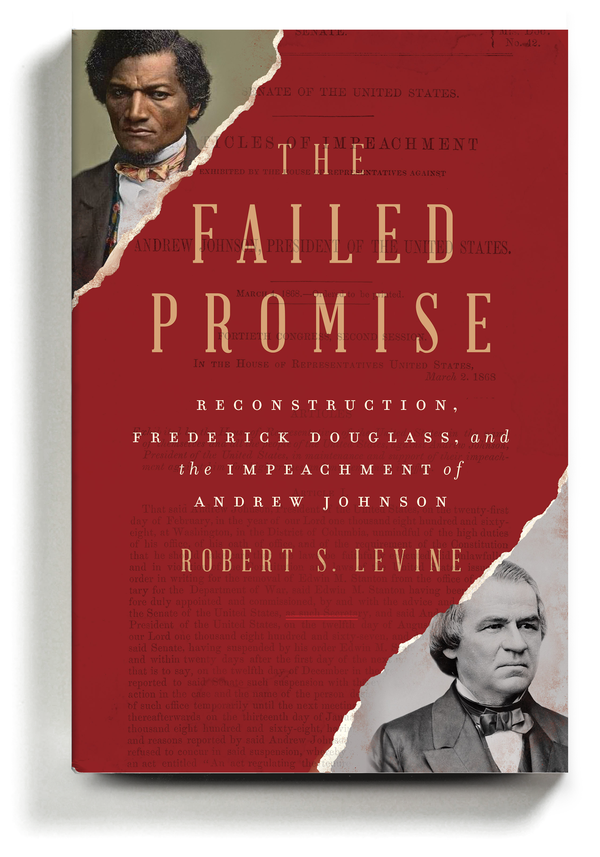 Andrew Johnson, having assumed the highest office after Lincoln’s assassination in 1865, wasn’t only an accidental president but also a racist one — about that, Robert S. Levine says, there cannot be any doubt.

But as Levine points out in “The Failed Promise,” his fascinating if flawed new book about Reconstruction and Johnson’s eventual impeachment, a number of Black leaders and Radical Republicans were in fact hopeful that Johnson would prove to be a more ardent defender of Black people’s rights than Lincoln himself.

Lincoln had taken a while to commit himself to the antislavery cause; so had Johnson, but after the Emancipation Proclamation of 1863, he started calling slavery “a cancer on our society,” and saying quietly that Lincoln was moving too slowly against the Confederacy to “crush the rebellion.” In 1864, speaking to an enthusiastic Black audience in Nashville, Johnson — the military governor of Tennessee at the time — issued an audacious promise: “I will indeed be your Moses, and lead you through the Red Sea of war and bondage, to a fairer future of liberty and peace.”

With this slender book, Levine aims to do several things at once. Unlike other volumes on Johnson’s impeachment, which focus mainly on the Radical Republicans who wanted him removed from office, “The Failed Promise” looks closely at the perspective of Frederick Douglass and other Black leaders. Levine also tries to recreate the uncertainty of the time, offering careful readings of contemporaneous documents instead of emphasizing retrospective accounts that have been shaped by the benefit of hindsight.

To that end, the book opens with Douglass’s famously scathing description of Johnson at Lincoln’s second inauguration in March 1865. As Douglass would write 16 years later in “Life and Times of Frederick Douglass,” he noticed Johnson glancing at him with a look of “bitter contempt and aversion.” Douglass turned to his companion and said, “Whatever Andrew Johnson may be, he certainly is no friend of our race.”

Levine, a professor of English who has written extensively about Douglass, advises that Douglass’s account, which dramatizes his prescience, ought to be read with a measure of skepticism. As a gifted orator and writer, Douglass could sometimes tell stories “long after the fact that sidestepped ambiguities or conflicts,” Levine writes. “Life and Times” depicts the “triumphant election” of Lincoln in 1860 in the most glowing terms, glossing over Douglass’s swift disillusionment. A year after that “triumphant election,” he was deriding the “pro-slavery interference of President LINCOLN” and the administration’s “helpless imbecility.”

Part of Levine’s argument is that Johnson, who by all accounts was drunk at Lincoln’s second inauguration, wasn’t necessarily doomed to be the disastrous president he proved to be. As a Southern pro-Union (and eventually antislavery) Democrat during the Civil War, Johnson had not only endeared himself to Republicans and cannily furthered his own political career, he had knowingly put his own life at risk.

Senator Charles Sumner was one of the Radical Republicans who was optimistic about Johnson, declaring himself “satisfied that he is the sincere friend of the Negro, & ready to act for him decisively.” Similarly, Johnson’s relations with African Americans were, Levine writes, largely “amiable” early on. The African American activist John Mercer Langston said he was satisfied by Johnson’s assurances “that his colored fellow-citizens should find in him a friend mindful always of their welfare.”

But Douglass was quick to see what Johnson was up to. Before the end of his first year in office, Johnson had announced an Amnesty Proclamation for ex-Confederates, allowing Southern landowners who petitioned him personally to hold onto their property. Instead of referring to Reconstruction, he insisted on the term “restoration.” In the South, emboldened white mobs descended on Black people, perpetrating the 1866 massacres in Memphis and New Orleans. Douglass, as part of a delegation of Black Americans that visited the White House to argue for Black suffrage, told Johnson, “You enfranchise your enemies and disfranchise your friends.”

Johnson, stubborn and thin-skinned, responded to criticism by getting indignant and defensive, even borderline “unhinged,” Levine writes. If it hadn’t been for increasing opposition, he continues, “a more benign and pragmatic Johnson might have emerged.”

The proposition is unconvincing, to put it mildly. Levine puts a lot of weight on the fact that in 1865, Johnson had privately expressed a plan for limited Black suffrage. Yet at the same time, Johnson was publicly insisting that suffrage too radical would set off “a war of the races.” And whatever Johnson may have said, what he actually did couldn’t be clearer. He used his power to undermine Reconstruction at every turn, presiding over what the historian Annette Gordon-Reed has called a “slow-motion genocide.”

Levine nimbly narrates the road to Johnson’s eventual impeachment — including a bizarre job offer that Johnson unofficially extended to Douglass to become the commissioner of the Freedmen’s Bureau, an agency that Johnson seemed to be doing everything else in his power to impair or even destroy.

But when Johnson was eventually impeached, it wasn’t for his subversion of Reconstruction; it was for failing to obtain Congressional approval before he fired his secretary of war. The articles of impeachment were “dryly legalistic,” almost all of them focused on violations of the Tenure of Office Act, passed by Congress just the year before. Republicans were trying to portray Johnson as a lawbreaker while studiously avoiding the matter of race. This fixation on technicalities, Levine says, “allowed Congress to impeach Johnson not for doing harm to hundreds of thousands of Black people in the South but for firing a white man.”

Considering how endemic racism was in both the North and the South, there were undoubtedly practical reasons for this, but Levine vividly shows how Douglass, as he did throughout the Civil War, kept trying to draw attention to the larger moral picture. Even before impeachment, Douglass was explaining to audiences how Johnson exploited the “defects” in the Constitution that allowed a “bad and wicked president” to assume “kingly powers.” After the trial, Douglass explained that Johnson should have been removed from office for attempting to return Black Americans to a “condition only less wretched than the slavery from which the war for the Union had rescued” them. Making impeachment about the Tenure of Office Act had buried Johnson’s disgrace under a pile of legalistic quibbles.

The impeachers may have been trying to be pragmatic, but playing it safe didn’t work; Johnson prevailed by a single vote. As one of his biographers, Hans Trefousse, once put it: “If you impeach for reasons that are not the real reasons, you really can’t win.”