Two years ago, Michael J. Fox had surgery to remove a benign tumor on his spinal cord. The actor and activist, who had been living with Parkinson’s disease for nearly three decades, had to learn to walk all over again.

Four months later, he fell in the kitchen of his Upper East Side home and fractured his arm so badly that it had to be stabilized with 19 pins and a plate. Mired in grueling, back-to-back recoveries, he started to wonder if he had oversold the idea of hope in his first three memoirs, “Lucky Man,” “Always Looking Up” and “A Funny Thing Happened on the Way to the Future.”

“I had this kind of crisis of conscience,” Fox said during a video interview last month from his Manhattan office, where pictures of Tracy Pollan, his wife of 31 years, and his dog, Gus, hung behind him. “I thought, what have I been telling people? I tell people it’s all going to be OK — and it might suck!”

His solution was to channel that honesty into a fourth memoir, “No Time Like the Future,” which Flatiron is publishing on Nov. 17. For an example of his new outlook, consider his perspective on traveling by wheelchair.

“It can be a frustrating and isolating experience, allowing someone else to determine the direction I’m going and the rate of speed I can travel. The pusher is in charge,” Fox writes. “From the point of view of the occupant of the chair, it’s a world of asses and elbows. No one can hear me. To compensate, I raise my voice and suddenly feel like Joan Crawford in ‘What Ever Happened to Baby Jane?,’ barking out orders.”

He continues: “Generally the person in control is a stranger, an airport or hotel employee. I’m sure that if we could look each other in the eye, we’d recognize our mutual humanity. But often in the wheelchair, I’m luggage. I’m not expected to say much. Just sit still.” Later, he adds, “No one listens to luggage.”

Before the spinal surgery, Fox was working on a book about golf. “Then life happened,” he said. “I started thinking about what it meant to be able to move and express myself physically, to have that taken away. And then dealing with the surrender it takes to lie down and say, ‘Cut me open.’ I don’t know what that’s like for anybody else, but I can figure out what it’s like for me and write it down.” 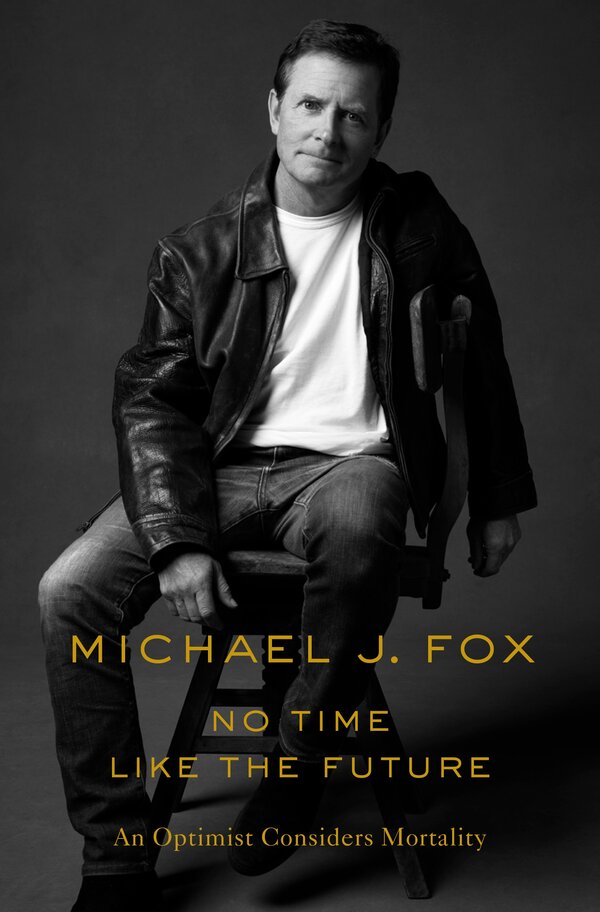 “No Time Like the Future” does delve into Fox’s favorite sport, which he plays on Long Island with his “uncles” — George Stephanopoulos, Harlan Coben, Jimmy Fallon and Bill Murray — “who look past my difficulties in playing golf with Parkinson’s and embrace the truth that golf is hell for everyone.”

The book also explores Fox’s separate but equal relationships with his four adult children (he said they were on high alert for evidence of favoritism); his decision to stop acting (“not being able to speak reliably is a game-breaker for an actor”); why he recently got a turtle tattooed on the inside of his right forearm (“a visual record of the power of resiliency”); and perhaps most movingly, the gradual progression of his disease.

He writes, “Absent a chemical intervention, Parkinson’s will render me frozen, immobile, stone-faced, and mute — entirely of the mercy of my environment. For someone for whom motion equals emotion, vibrance and relevance, it’s a lesson in humility.”

For a certain consumer of Generation X pop culture, Michael J. Fox calls to mind “Family Ties” in prime time, “Back to the Future” in movie theaters, interviews in Tiger Beat. The energy that made him such a riveting presence onscreen comes through in his book. It even comes through in the time he is on my screen — where I’ve watched different incarnations of him all my life, only this time he’s talking just to me — to the point I’m worried about getting in trouble with his mama-bear publicist if I take up more than the agreed-upon amount of time.

The only pause in momentum comes when he talks about Pollan. “The book is a love letter to Tracy. She really got me through” — he swallows, shakes his head, holds up a hand — “everything.”

The guiding principle for “No Time Like the Future” was inspired by Fox’s brother-in-law, Michael Pollan, a fellow writer known for his books “The Botany of Desire” and “How to Change Your Mind.” “He always says to me, ‘Velocity and truth. Velocity and truth. Keep it honest and keep it fast,’” Fox said. “I don’t want to be the guy who’s sitting on the pillow telling people, ‘Be the ball.’ I’m not going to tell anyone about anything other than my experience. I’m 59 years old, and I got no time for small talk.”

A draft of the book was underway when Fox and his family relocated to their house in Quogue, N.Y., to ride out the early months of the pandemic. From there, he continued to work six days a week via FaceTime with his longtime producing partner, Nelle Fortenberry, who was in Sag Harbor. Eventually the team rented an office, where their process was the same as it had been for previous books: Fortenberry plastered a wall with index cards listing themes Fox wanted to cover. Under each one was another row of color-coded cards containing stories pertaining to each subject.

“The way I work is, I write notes no one can read and then I dictate them to Nelle,” Fox said.

Fortenberry elaborated in a phone interview: “Michael’s handwriting has never been good,” she said. “So he talks and I type. I am not his ghostwriter or a co-writer. He is the writer of this book.”

The two have collaborated together for 25 years — on books, films and projects for the Michael J. Fox Foundation, a Parkinson’s research and advocacy organization. She first met Fox to talk about a job with his production company, a position she wasn’t even sure she wanted.

“Within five minutes, I could sense the deep friendship that would follow,” she said. “I don’t think I’d ever felt that way before, that sort of certainty you get when you meet your husband, or when you look at 50 houses and you finally walk into the one and you’re like, ‘Look no further. This is my house.’ I felt that way with Michael from the very beginning.”

Fortenberry said the foundation gets letters from Parkinson’s patients wanting to know what miracle drug Fox is taking. “There’s no miracle drug. That’s just who Michael is,” she said. “But this book gives a different side of him, and it’s not manufactured. It’s 100 percent real. And heart-wrenching.”

Fox writes, “Have I been an honest broker with the Parkinson’s community? The understanding I’ve reached with Parkinson’s is sincere, but the expression of it risks being glib.” He used to be a believer in making lemonade out of lemons, but now, he writes, “Screw it — I’m out of the lemonade business.”

Bob Miller, the president and publisher of Flatiron, who has also known Fox for 20 years, said “No Time Like the Future” is “more wistful, thoughtful and quiet. It’s a thinking person’s book about how you continue to find meaning through hard things.”

He initially thought Fox’s message would be useful counterprogramming to the political environment, but that was before the pandemic. Now, he said, “We’re surrounded by illness and the possibility of illness on a daily basis, so we can all join Michael in a way. We want his answers.”

People often ask Fox if he’s going to move back to Canada, or if he can help them make a move to Canada, where he was born and lived until he was 18. “I built a life here and became a citizen so I could vote,” he said. “And now I want to be here to help fix what’s going on. There’s a cleansing happening. Things are going to get better.”

These sound like the words of an optimist, don’t they? Fox laughed. “Optimism is informed hope,” he said. “You’ve been given something, you’ve accepted it and understood it, and then you have to pass it on.”

He does this through his foundation, which is now 20 years old and has funded more than $1 billion in Parkinson’s research. “I’d hoped we’d be out of business by now,” he said. “I thought we’d find a cure — oil and dog hair will fix it, or something like that.”

Still, Fox writes in his book, “In the quest to cure Parkinson’s, we’re absolutely certain we’re the tip of the spear.”

In his epilogue, he looks back on the first wave of the pandemic. He describes the sound of neighbors banging pots, blowing whistles and ringing cowbells in honor of health care workers, “a band of thousands, sending a message of thanks out to the universe.” He recalls his father-in-law, Stephen Pollan, who died in 2018, and was known for his trademark assurance, “Just wait, kiddo. It gets better.”

Or, as Fox puts it, “With gratitude, optimism becomes sustainable.”