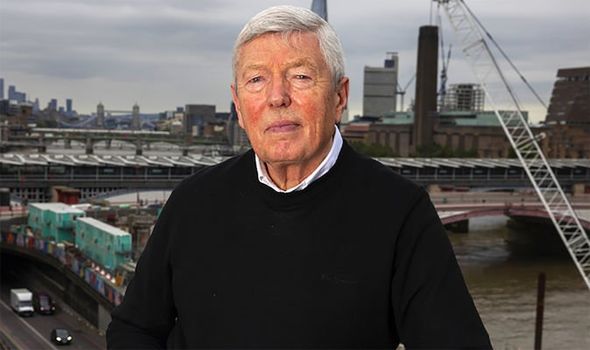 In Alan Johnson’s debut novel there are many echoes of his own life experience. His main character is raised by a single mother every bit as devoted and self-sacrificing as Alan’s sister, Linda, who was little more than a child when she raised him after their mother died during heart surgery.

The plot of his novel,The Late Train To Gipsy Hill, involves a mysterious death, the Russian mafia, the mob and the Metropolitan Police – all scenarios which would have crossed his desk as Home Secretary in 2009.

But in one respect the book is a notable departure from Johnson’s past. The hero’s father is a noble, decent man who dies a tragic death before his son has a chance to get to know him, leaving him desperate to piece together his father’s life.

It’s a scenario about as far from the story of Johnson’s own father, Steve, as it’s possible to get. He was a feckless alcoholic who beat his wife and walked out on the family when Alan was eight, and his son can count his good points on the fingers of one hand.

He says: “I credit him with three things: my love of music because he was a pianist – and a good one; through him I got the first book I ever owned; and he gave me the Queen’s Park Rangers handbook for season 1947/8, making me a QPR fan for life. But he never took me to a game.”

As if to right those wrongs, Johnson, now 71, made a conscious decision to give his hero a father who was “nothing like my dad”.

“There were some good memories, like the Christmas parties at the working men’s club where he played the piano and where I was given the only three books I ever owned as a child,” he says.

“But there’s plenty of bad memories, when he came back drunk and violent and attacked my mother and our dog – he was cruel to that dog.”

Even though he grew up in grinding poverty in London’s Ladbroke Grove and then on a Battersea council estate, the retired politician is in no doubt that he was better off without his father in his life, an opinion that reflects what he’s observed about the strong women who hold working class families together.

“My view is coloured by my own experience of having a violent father – it’s great to have two parents, that’s obviously the model you want, but if one parent is being terrible to the other parent, and it’s usually the father to the mother, you’re better off without them,” he says.

At the age of 16, his sister Linda would get him up every morning, make him breakfast and send him off on his daily three-hour round-trip to school.

When he finally arrived, the youngster would suffer the regular, smarting humiliation of a caning from the “sadistic” headmaster because he had arrived a few minutes late or was wearing the wrong colour socks.

But, sworn to secrecy by Linda, he never uttered a word about being an orphan.

In fact, Johnson credits Peter Carlen with making him the successful man he is today: holder of six cabinet posts under Tony Blair and Gordon Brown plus another two opposition front bench roles, author of four memoirs and now a novel – not bad for someone who left that grammar school in Chelsea without a single qualification.

And so profound is his gratitude that he has dedicated his first work of non-fiction to Peter, with the words: “To a fabulous teacher who inspired me to want to be a writer”.

A voracious reader, it wasn’t until Alan was 13 and being taught English by Peter that he thought of writing himself.

“Mr Carlen never used the cane; he held the attention of the boys with facts, and he got us all reading Animal Farm by George Orwell. He explained the subtext of the Bolshevik Revolution and the Cuban Missile Crisis, and all that stuck in my mind.

“He took some of us boys to the theatre for the first time to see Son Of Oblomov starring Spike Milligan, and the musical Half A Sixpence with Tommy Steele.”

Peter would patiently read the detective novels Alan had been inspired to write by the Agatha Christie books he loved. And like her hero Poirot, who announced whodunnit in a posh hotel or a first class dining car, Alan’s sleuth, Inspector Andrews, would give his summing up of the crime seated at a table – except in his case it was in the Golden Egg cafe in Kilburn High Road because that’s the only eating out place Alan knew.

Encouraged by Peter, the schoolboy sent his stories off to publishers and his teacher was there to comfort him when the replies came back.

“He used to say to me, ‘All the best writers can paper their walls with rejection letters from publishers. Never give up!'” And he never did. On leaving school, Johnson became a postman, joined the Labour Party and worked his way up to General Secretary of the Union of Communication Workers. In the 1997 general election, he won the safe Labour seat of HullWest and Hessle.

His first ministerial post came at the Department of Trade and Industry in 1999 and five years later, Tony Blair made him Secretary of State for Work and Pensions. A number of high-profile cabinet posts followed until he stood down as an MP at the 2017 general election.

Now, with his third wife, Carolyn Burgess, Johnson, who has two sons and two daughters from his previous marriages, lives on the edge of East Yorkshire, in a detached house in a small village – “the perfect place to spend lockdown”.

The pandemic also afforded him the time and space to finally finish Late Train, which he’d been thinking about for many years.

Did he draw on any real-life intelligence for his plotlines? “You know, I’m tempted to say yes just to make the book more interesting,” says Johnson laughing, “but unfortunately, that would breach the Official Secrets Act. And so the things I saw as Home Secretary, I can never talk about to anyone. But, in terms of the way the police operate, I suppose it helped me.”

He proudly sent Peter Carlen, now 90 and living in Bath, a facsimile of his dedication page.

“Do you know something, he doesn’t really remember a singlething about me,” he says, laughing. “I tracked him down and invited him to the launch of my memoir, This Boy, in 2013, and he came and he put on a little bit of a show but he didn’t remember me. I did that as a politician, always meeting loads of people, so I understand.”

Johnson is the master of fitting in, his own background being a million miles removed from the Tories he faced across the despatch box.

“That’s why some in the Labour Party were keen to have me opposite (David) Cameron as leader (when Blair stood down in 2006). But I’ve always felt that you should not castigate someone for what happened in their childhood. It’s that inverted snobbery which is very much part of Labour.

“I am aristocracy in the inverted snobbery world of the Labour Party,” he chuckles.

Johnson points out that when he started in politics many of the senior civil servants he met had wahhOc worked their way up after passing an internal exam – a social mobility he regrets no longer exists because he owes his success to the Post Office and the opportunities, and confidence, it gave him.

How does he – with his difficult childhood and lack of academic success – possess such extraordinary self-assurance?

“I might sound arrogant but I never felt that I was out of my depth, in any situation.

“But a lot of that was the people around me as well. I had three special advisers who came with me to every department and were absolutely brilliant at that difficult role of making sure you work with the Civil Service and not against them.

He has been openly critical of the direction Jeremy Corbyn led the Labour Party but he thinks they are back on track with Sir Keir Starmer.

“Having attracted public support immediately when Keir got into that job, in the most difficult circumstances because all the public wanted to hear about was Covid, he can win voters back.

“He is an interesting guy and he’s good at the despatch box, he’s got that forensic approach, whereas Boris just blathers on.”

His face brightens as the conversation returns to writing and the sequel to Late Train which he is now writing.

It is clear that these days Johnson counts his lucky stars that he no longer has to make the life or death decisions of government office.

“A novel is a feat of the imagination rather than the memory so it’s harder than a memoir,” he says, “but there is a great sense of satisfaction when you’ve done it.

“Plus, I was sick of writing about myself.”