“Given the state of migratory birds around the world, I needed a little good news.”

Coming near the end of “A World on the Wing: The Global Odyssey of Migratory Birds” — Scott Weidensaul’s gripping journey alongside the world’s feathered wanderers and the people who study them — these words are necessarily grim. Any longtime birder offers the same lament: Migration just isn’t what it used to be.

The plummeting numbers of songbirds and shorebirds, raptors and waterfowl, have become painfully apparent; a recent study collating decades of data revealed that nearly a third of all birds — three billion creatures — have vanished from North America in just the last 30 years. Weidensaul tasks himself with communicating to both the knowing birder and the layman the epic scale of what’s happening in our skies every year, the whys and hows, while offering rays of hope through the gloomy storm clouds. The success of “A World on the Wing” in navigating that challenge rivals the astonishing feats of the birds he chronicles.

Those feats and the jaw-dropping science behind them form the heart of the book. A tiny ruby-throated hummingbird crosses the entirety of the Gulf of Mexico in a single nonstop flight; inconceivable, until Weidensaul describes certain whimbrels — a shorebird somewhat bigger than a pigeon — that leave the Canadian Arctic, travel east the width of the continent, and hurl themselves over the North Atlantic, directly into raging seasonal storms whose winds, it turns out, give them a boost for a nonstop transoceanic flight from the Canadian Maritime Provinces to Brazil. Suddenly the hummingbird seems like a slacker. 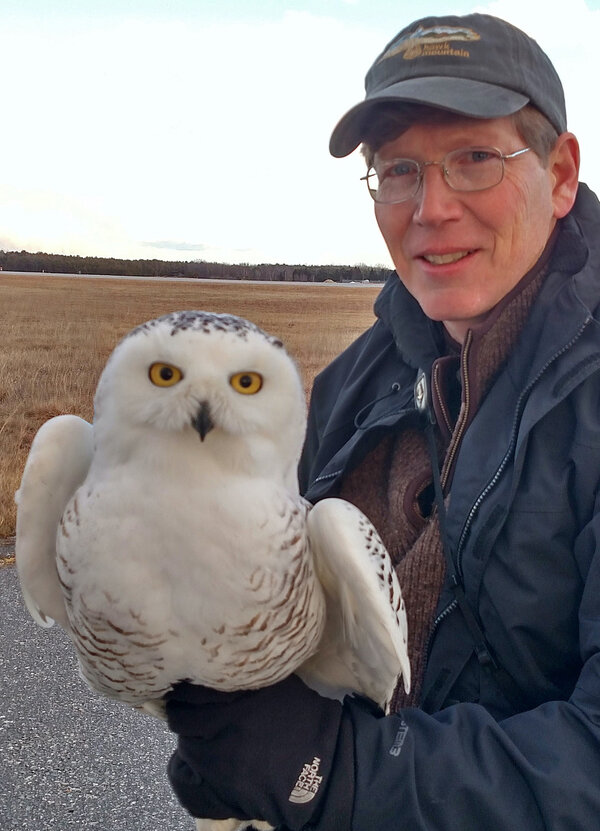 “A World on the Wing” is littered with such wonders: birds who can pack on fat without obesity’s downsides, add muscle when and where it’s needed, and burn fuel with extraordinary efficiency, qualities that would make endocrinologists, bodybuilders and weight loss gurus salivate. Migrants can even “see” the Earth’s magnetic field via the quantum entanglement of the electrons in their eyes, an evolutionary trick that is the stuff of science fiction.

Like the Swainson’s hawks he studied in California, Weidensaul is returning to familiar territory. His 1999 book, “Living on the Wind,” also explored bird migration; the difference this go-round is time and skin in the game. Since the days when he first wrote about the subject, Weidensaul by his own account has steadily been drawn from the role of observer to participant in the hands-on science of migration. This allows him to give us portraits of the scientists and concerned community members alongside whom he has manned the barricades, trying to understand the losses in bird populations and stem them. It’s a global cast that includes a former secretary of the Treasury, a ranchero on the pampas of Argentina, a journalist turned conservationist in a remote Baptist region of India. They have a common quest to save birds — birds whose travels similarly bind disparate parts of the world into an unexpected, fragile whole.

In the time between books, the tools for understanding migration have grown exponentially, and “A World on the Wing” dives into these advances. Along with the conservation success stories, this constitutes the most hopeful aspect of the book: that better technology and the metadata of the Information Age have made new insights possible and created the opportunity for effective, targeted solutions to the ills plaguing our migratory birds.

Perhaps most heartening, Weidensaul relates a tale likely familiar to North American birders, if only because we played a critical role in it. California’s Central Valley had a problem: Vast agricultural sprawl had replaced wetlands crucial for wintering and migrating birds. Then came eBird, a Cornell Lab of Ornithology and National Audubon Society database of bird sightings created from the contributions of everyday birding enthusiasts. From those data, conservationists were able to determine when migrating wetland birds would be arriving in the region, and they paid farmers to flood their rice fields to coincide with those periods. These pop-up wetlands resulted in lower costs for conservationists compared with outright land acquisition; extra cash in the pockets of farmers; and, most important, five times more birds than in the average Central Valley farm field.

All of this ecological focus, written accessibly without sacrificing an iota of the science, still might have made for some dry reading, if not for Weidensaul’s knack for evocative passages and immersive scenes: “The world was precisely equal halves of gray, divided by the flat line of the horizon — the smoky silver of an overcast sky, unmarked and smooth, and the darker, mottled granite and charcoal of a mud flat that stretched to every side, paper-thin sheets of water lying on its surface reflecting the clouds or ruffled by the breeze.”

Weidensaul is describing the Yellow Sea, a barren, seemingly lifeless expanse on China’s coast that is a banquet hall for millions of migrating shorebirds for whom this is the one and only possible rest stop: “The flocks came from the south, dense layers of small bodies that undulated and folded into themselves, creating sheets, splitting into tendrils, forming separate tributaries that reunited into great rivers of wings, all moving with tremendous speed.”

At its best, “A World on the Wing” brims with spectacle: the silhouettes of a hundred thousand Amur falcons flying past the moon, ten thousand Swainson’s hawks soaring against the setting sun before roosting together in eucalyptus trees, waves of colorful warblers moving along the St. Lawrence River in Quebec in one of the greatest shows on Earth — shows that were once the norm, and now are increasingly rare.

The passion Weidensaul brings to these scenes is personal. “A World on the Wing” finds some of its most moving moments early on, when he charts the development of his own interest in birds. As he describes watching the great movements of raptors over Hawk Mountain in Pennsylvania, “fly-fishing in the air” to lure a golden eagle into his bander’s mist net, or the simple pleasure of celebrating the raucous arrival of Canada geese every spring over his childhood home (“Big Goose Day” his family called it; “but it’s not like we baked a cake or anything,” his sister adds), a birder can be forgiven for nodding in recognition. And non-birders can feel enough of the joy that they too might be inspired to partake of the wild.

Spring rushes up the shoots of growing things, and from the towers of New York to the farms of Alabama, from the plains of Manitoba to the wet woods of Cascadia, we know that wings rushing up from the south are not far behind. “As the light grew around me, the woods, I realized, were seething with birds,” Weidensaul writes. “They darted across the narrow trails I followed beneath the oaks, flickers and slashes of motion in my peripheral vision, and flushed before me like a bow wave as I walked — warblers and sparrows, buntings and orioles, catbirds and thrushes, flycatchers and grosbeaks. This was the kind of day for which my colleagues and I came here.” As the birds flit through these pages, but with ever less frequency through our lives, we can only hope that birders and non-birders alike take inspiration and a call to action from “A World on the Wing.” This is the kind of book we’ve been waiting for.