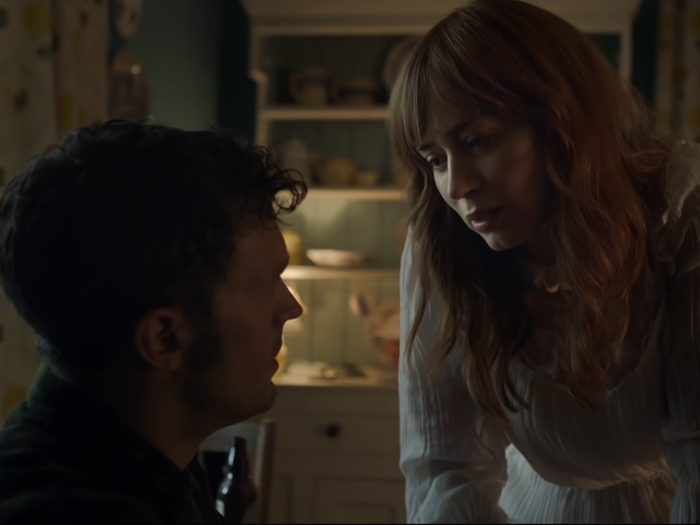 The trailer for the upcoming movie "Wild Mountain Thyme" was released last week, and the internet wasted no time roasting the cast for their lackluster accents.

The romantic film starring Emily Blunt and Jamie Dornan takes place in Ireland, yet the Irish found the actors' accents to be so bad that the phrase "Oh Jesus" started trending on Twitter. Even Dornan, who is Northern Irish, wasn't safe, with one fan tweeting, "The saddest part about the wild mountain thyme trailer is that Jamie Dornan is an actual Irish person."

But Blunt, Dornan, and their castmates aren't the only actors to fall short when it comes to putting on an accent. From British to Russian, American to Japanese, here 15 bad movie accents, according to critics.

Critics felt Laurence Olivier embraced his character's Jewish and German roots a bit too much in "The Jazz Singer." 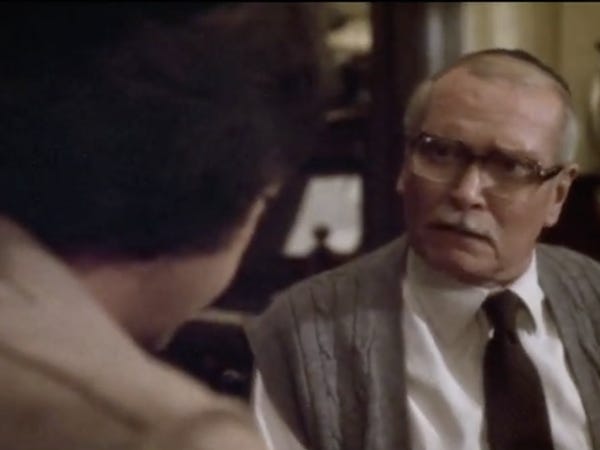 In Roger Ebert's one-star review of the film, the legendary film critic writes, "Laurence Olivier plays the aging father in the film, in a performance that seems based on that tortured German accent he also used recently in 'The Boys from Brazil,' 'Marathon Man' and 'A Little Romance': Is it too much to hope that Sir Laurence will return to the English language sometime soon?"

Sean Connery's and Christopher Lambert's accents both missed the mark in "Highlander." 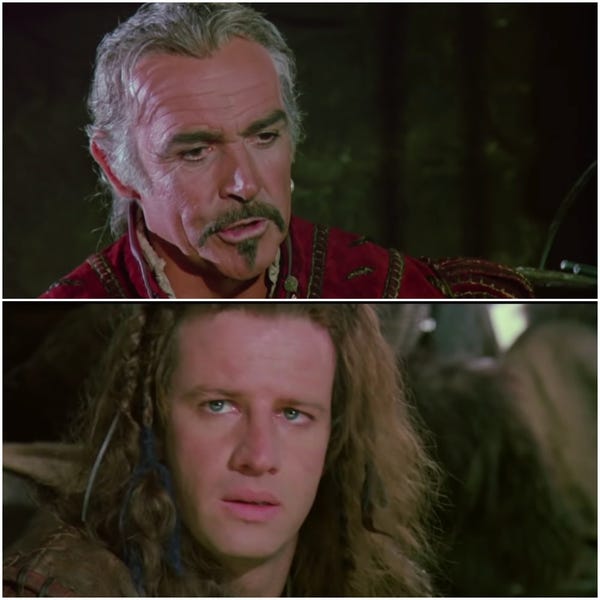 Sean Connery and Christopher Lambert have been roasted by critics over the years for their accents in the 1986 film "Highlander."

In a 2018 column for CNET calling for real Scottish accents in movies, Mark Serrels asks, "Why the hell was Christopher Lambert, a French-American actor who clearly had no idea what a Scottish accent sounds like, playing a Scotsman?" and "Why was the only actually Scottish actor in the movie — Sean Connery — playing a character called The Spaniard?"

In defense of his actors, directory Russell Mulcahy told The Guardian in 2016, "We didn't bother changing Sean's accent – this was Sean Connery! These guys had been around for centuries. They could have picked up accents from wherever."

Mickey Rooney's accent for the character Mr. Yunioshi in "Breakfast at Tiffany's" has been heavily criticized. 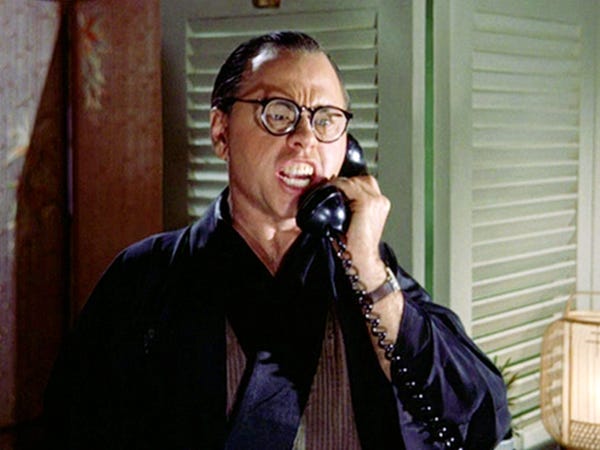 Mickey Rooney's portrayal of the Japanese landlord Mr. Yunioshi in the 1961 film has been the topic of extensive criticism for his racist and offensive characterization of the Japanese.

After Rooney's death in 2014, Jeff Yang of The Wall Street Journal wrote, "Rooney's portrayal of Yunioshi — taped eyelids, buck teeth, sibilant accent and all — has become one of the persistent icons of ethnic stereotype, brought up whenever conversation turns to the topic of Hollywood racism." Yang adds that six years before his death, Rooney expressed regret about playing the role, saying he "wouldn't have done it" had he known it would offend people.

Dick Van Dyke's performance in "Mary Poppins" was once ranked "the worst British accent by an American." 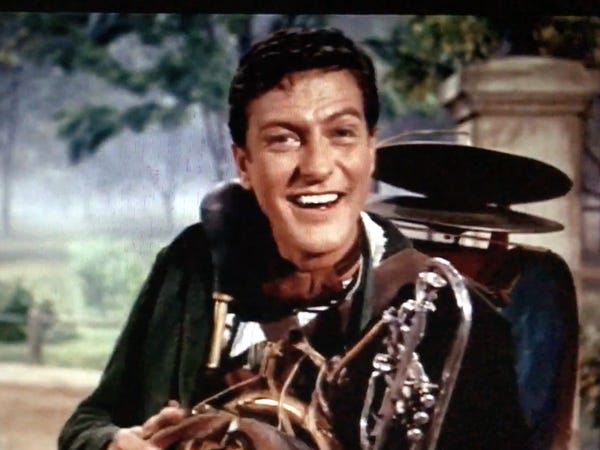 A 2017 poll from Babbel asked British and American actors to rank the best British accents from Americans and vice versa, but they also asked people their opinions on the worst fake accents. The winner? Or rather, the loser? Dick Van Dyke for his performance as Bert in Disney's 1964 film "Mary Poppins."

Van Dyke's accent has long been regarded as one of the worst fake accents in the history of film by both critics and fans. In fact, after receiving a BAFTA in 2017, Van Dyke apologized for his poor accent, saying, "I appreciate this opportunity to apologize to the members of BAFTA for inflicting on them the most atrocious Cockney accent in the history of cinema."

Kevin Costner's accent in "Robin Hood: Prince Of Thieves" is hated almost as much as Dick Van Dyke's poor Cockney. 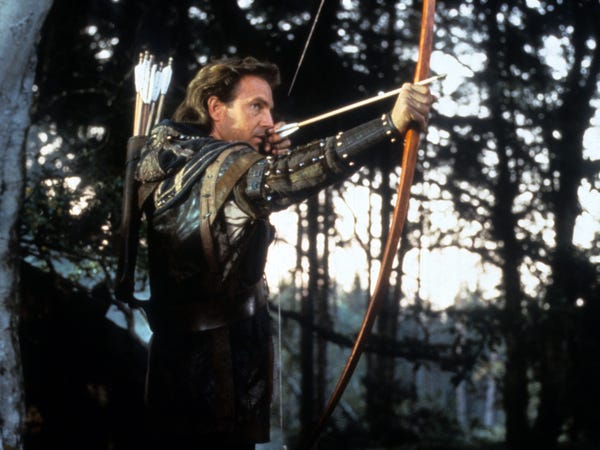 Which accent was second on Babbel's list of worst British accents? Kevin Costner's in "Robin Hood: Prince Of Thieves." In the 1991 film, Costner seems to attempt an accent in some scenes but completely disregards it in most.

Cinema Blend wrote, "Kevin Costner doesn't even attempt a British accent in 'Prince Of Thieves,' instead he just speaks in his usual American droll." 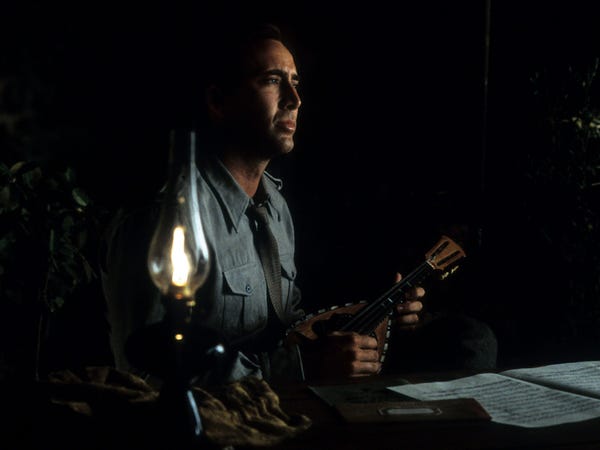 In the eyes of critics and fans, Nicolas Cage's Italian accent in the 2001 film didn't just fall flat, it completely crashed. It sounds more like a satirical Transylvania-esque accent you'd hear in "What We Do in the Shadows."

In his review of the film, The Guardian's Peter Bradshaw wrote, "What a droopy, disappointing film this is. It has some of the unhappiest casting to be seen and dodgiest accents to be heard in the cinema, the worst offender being the barrel-chested, horse-faced Nicolas Cage as a captain in the Italian army." 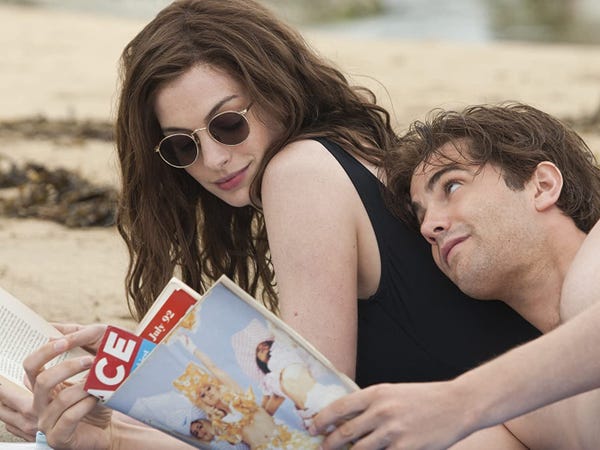 Anne Hathaway's acting in the 2011 romantic drama "One Day" was on point except for one small, or maybe large detail: her Yorkshire accent.

Caroline Frost of the Huffington Post wrote, "I was so distracted, wondering what version of the mother tongue she was going to attempt next – veering from wartime-BBC to proper 'Eeee by gum' clangers – I actually forgot to cry, which was a shame, as it's a corker of a tale, and Edinburgh and London both look lovely."

Nobody knows what's going on with Jon Voight's accent in "Anaconda." 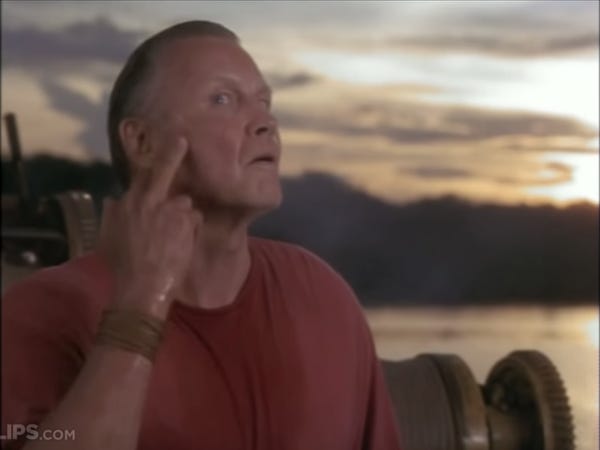 It's not clear on what exactly Jon Voight based his accent in the 1997 flick "Anaconda," but most critics and viewers agree it wasn't very Spanish-sounding.

Scott Tobias wrote in 2011 for AV Club, "It's hard to discern the precise origins of Voight's accent in 'Anaconda,' but it's not in the Southern Hemisphere, much less in the vicinity of Paraguay. At times, he sounds like Al Pacino's Cuban gangster in 'Scarface,' full of delicious, dialect-mangling bluster; elsewhere, he sounds vaguely like a native Italian struggling with English as a second language."

Fans and critics are passionately opinionated about Leonardo DiCaprio's accent in "Blood Diamond." 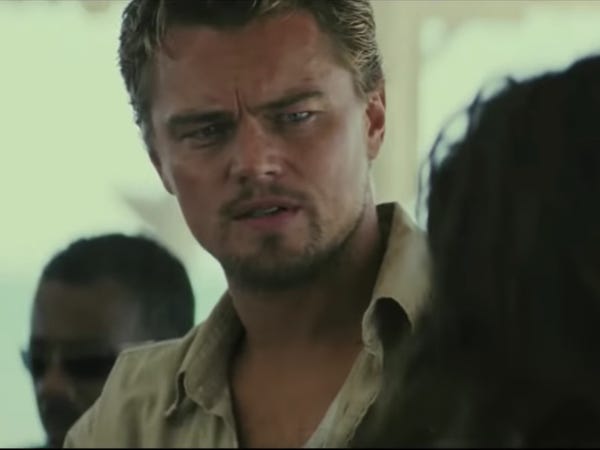 Leonardo DiCaprio's performance as the smuggler Danny Archer in the 2006 film "Blood Diamond" featured one of the most divisive movie accents in recent cinema history. Many critics and viewers feel the performance is lackluster for at times mixing the intonations of different African dialects, while others think his performance outshines the accent.

"The Daily Show's" Trevor Noah, who is South African, in 2019 tweeted a segment from his show poking fun of DiCaprio's performance with the caption, "Tiffany is moving toward ethical diamond sourcing, but nothing will erase the horror of Leo DiCaprio's accent in 'Blood Diamond.'" In the video, he said DiCaprio sounded like "a drunk Australian" and that South Africans would never forget the performance.

American accents are tough even for American actors, as proven by James Van Der Beek in "Varsity Blues." 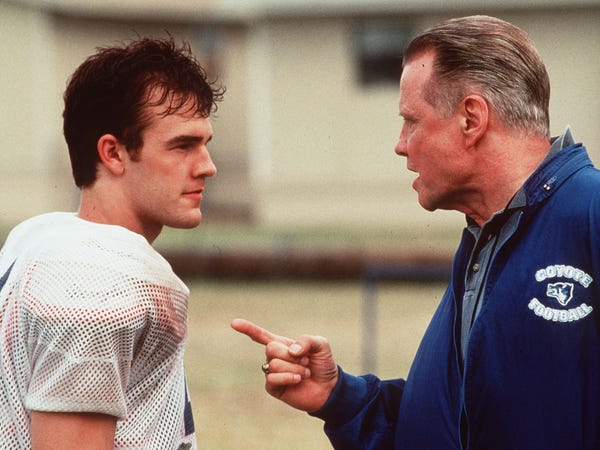 James Van Der Beek's Texas accent in the 1999 film "Varsity Blues" has widely been recognized as one of the actor's worst efforts. Van Der Beek's and the rest of the cast's accents were apparently so bad, they won the "Worst Fake Accent" award at that year's Stinkers Bad Movies Awards, according to IMDb.

In May, Van Der Beek's accent came back to haunt him after showing his kids "Varsity Blues." A video posted to his Instagram story shows his son Joshua making fun of his accent saying contrary to his other accents that were "perfecto," his Texas accent "was the worst." 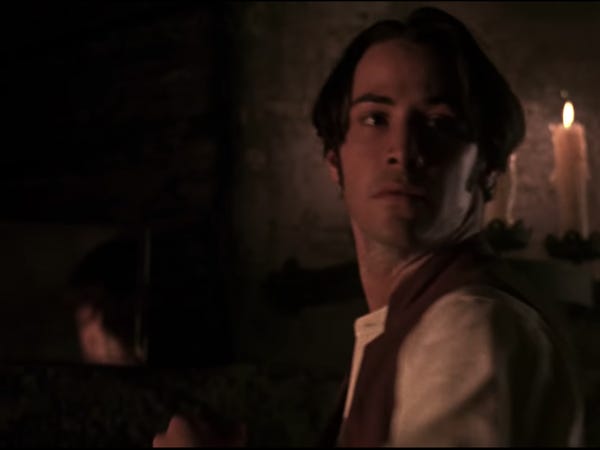 Keanu Reeves' English accent in the 1992 film "Bram Stoker's Dracula" has long been a smudge on his rather accomplished acting resume.

During a 2015 interview with EW, director Francis Ford Coppola acknowledged that critics gave Reeves a hard time over his English accent, but affirmed his approval of the then-young actor's performance.

"We knew that it was tough for him to affect an English accent.," Coppola told EW. "He tried so hard. That was the problem, actually — he wanted to do it perfectly and in trying to do it perfectly it came off as stilted. I tried to get him to just relax with it and not do it so fastidiously. So maybe I wasn't as critical of him, but that's because I like him personally so much." 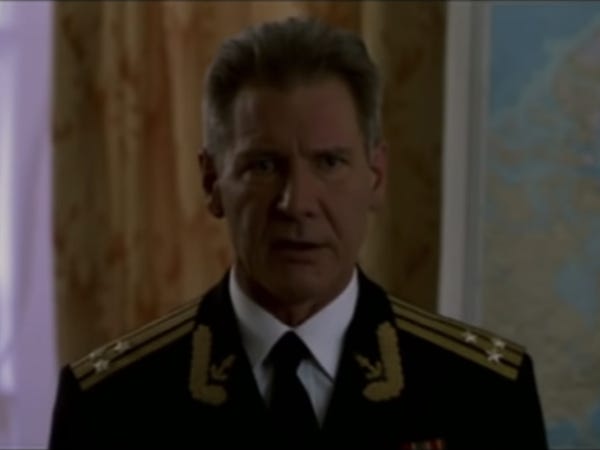 In the 2002 film "K-19: The Widowmaker," Harrison Ford sounds more like a "South Park" character donning a mocking Russian accent than a Soviet military captain.

Jeff Vice of the Deseret News wrote, "'K-19: The Widowmaker' is saddled with one of the worst affected accents in recent cinematic history: a sometimes-hilarious attempt at Russian by Harrison Ford, an actor who usually knows his performing limitations." 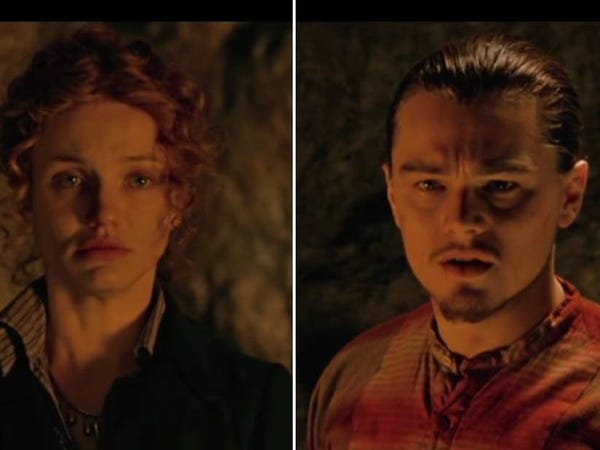 Joshua Brown of the London Review of Books wrote that the Irish characters in the film were "political naifs in 1863, seemingly bringing from their homeland only vague resentments and bad accents."

Angelina Jolie caught flack for her character's accent in "Alexander." 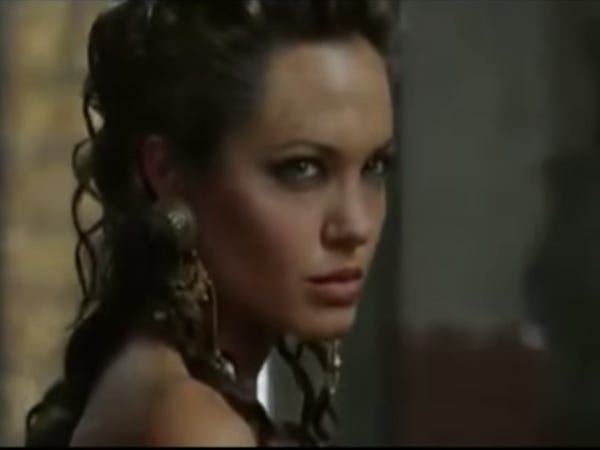 Angelina Jolie's portrayal of Queen Olympias in the 2004 film "Alexander" raised the eyebrows of most critics because the historical figure she played sounded more Spanish or Eastern European than Greek.

Stella Papamichael of the BBC in 2005 wrote, "Jolie's portrayal of Olympias as a smacked-up cross between Morticia Adams and Medusa, eyes goggling as snakes writhe around her."

Jolie's and her co-star Rosario Dawson's accents were so off the mark, they earned a joint Worst Fake Accent: Female award at the 2004 Stinkers Bad Movies Awards.

Critics couldn't figure out Jodie Foster's accent in "Elysium": Was it bad South African, or British, or French? 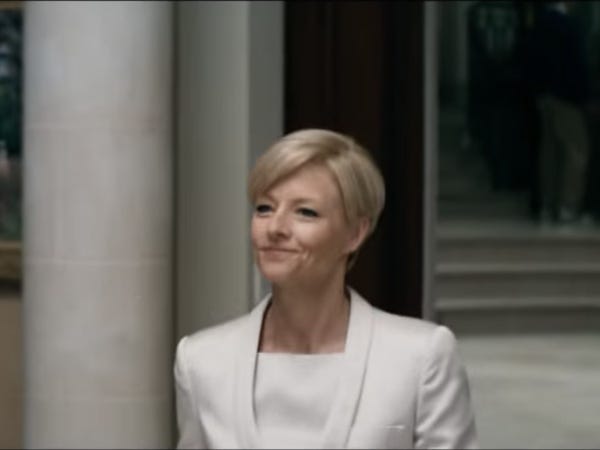 Critics were uncertain about just what sort of accent Jodie Foster went for in the 2013 sci-fi action flick "Elysium" but they could agree on one thing: It was a horrible accent.

Peter Bradshaw of The Guardian wrote, "She has a meanie Brit accent but switches haughtily to French for addressing murmured endearments to her husband and children," while Roger Ebert reviewer Ben Kenigsberg thought it was more of a South African accent.