Say what you want about documentaries, but they make a difference. Just look at how Surviving R. Kelly and Leaving Neverland shifted public perception about their subjects. Almost overnight the scales seemed to tip from uncertain shrugs to an investigation that led to an arrest of R. Kelly and calls for the banning of Michael Jackson‘s music from the airwaves.

Now we’re getting our first real look at what may be the next doc to truly effect change in the zeitgeist. This time? It’s about the allegations against Woody Allen.

The four-part documentary Allen v Farrow premieres on HBO next Sunday, February 21, and it promises to give us all the public trial of Allen we never got to witness.

Filmed in secret over the past three years, the doc features footage never before seen by the general public in which 7-year-old Dylan Farrow accuses her father on camera of molesting her.

The video was recorded by Mia Farrow as evidence for when she went public with the unthinkable allegations. The couple had been together for six years when they adopted Dylan as a baby in 1985. At the time Soon-Yi Previn, whom she’d adopted with her previous husband Andre Previn was now 8 years old. Mia says it was Allen who said they should get “a cute blond girl” next.

In 1992, Mia discovered Woody had been having an affair with Soon-Yi, who was then 21 (according to the doc, that affair had been going on since she was in high school). She found naked pictures of her adopted daughter in Allen’s things. Adult Dylan recalls in the doc:

“And that was sort of the first instance where I thought, ‘Oh… it’s not just me.’”

Dylan speaks candidly in the film about how she was always “daddy’s girl,” especially after her brother Ronan Farrow was born. She says:

“ very slowly instilling the idea in my head she was more parent, he was more my parent, I was daddy’s girl.”

She describes how he showed her “intense affection all the time,” something which is illustrated in home videos which would seem sweet if not for what came out later. Dylan describes her father’s affection much more ominously now:

Family members claim in the film that Dylan began hiding from her adoptive father, locking herself in the bathroom when he came over or sometimes playing dead. 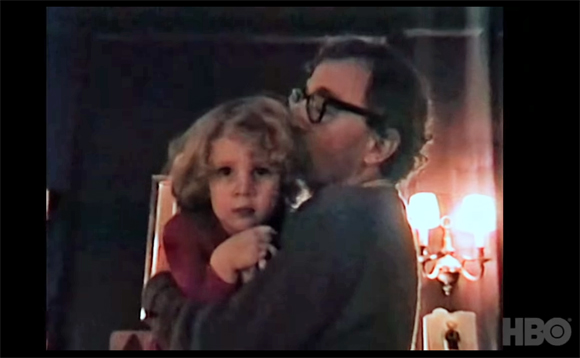 As she has spoken about at length publicly recently, Dylan opens up in the film about her memories of abusive behavior, saying she has “very vivid snapshots, different places, mostly a window with a feeling attached.” She recalls:

Mia describes seeing the same incidents and not feeling OK about them even then, when it was supposedly just a father and daughter being sweet:

“I would suddenly walk in and there she would be in his bed with him in his underwear. Sometimes he would also kneel in front of her or sit next to her and put his face in her lap which I caught a couple of times and I didn’t think that was right.”

Apparently Allen also taught Dylan how to suck his thumb.

“I remember sitting on the steps with him in the country house. There was nobody else around, and he was directing me on how to suck his thumb — telling me what to do with my tongue, and I think that lasted a while. It felt like a long time.”

When asked about this odd behavior by a family friend, Allen reportedly said it “calms her down.”

Dylan’s sister Tisa Farrow remembers one time Allen was applying sunscreen to Dylan and his hand went to her lower back, where his finger  “kind of lingered” where it shouldn’t have been:

“ suggestively went between her buttock cheeks with his finger and then came back. Mia saw it too and snatched the sunscreen away.”

But all those questionable incidents were just preamble to the events which have become a lingering controversy in Hollywood for the past 30 years.

The allegations stem from an afternoon in August 1992 in which Allen came over to the house in Connecticut while Mia was out. At one point, per witnesses, everyone realized no one had seen Woody or Dylan in about 20 minutes.

The next day, a family friend named Casey Pascal told Mia that the babysitter saw Dylan on the couch — and Allen was “kneeling on the floor with his head buried in her lap.” Pascal says in the doc:

“She said she felt she’d walked in on a very adult situation and realized it was a child and she was horrified to the core. She said Dylan was staring off into space and Woody’s face was in her lap.”

Mia remembers that day too well. She says:

“I remembered she had not had any underpants on . She was sitting next to me. I said to her, ‘Did this happen, did daddy have his face in your lap yesterday?’ She said yes.”

That’s when Mia got her video camera and filmed her daughter’s description of events. In the film she seems to describe two separate incidents, the one on the couch and another in an attic.

“He touched privates and then he was breathing on my leg. And then, this he squeezed me too hard that I couldn’t breathe.”

“What do you mean he touched your privates? Where did he touch you?”

Dylan then gestures toward her bottom.

In another video, the 7-year-old describes another incident in which Allen took her to the attic:

“He said, ‘What about some father-daughter time?’ And then I said, ‘Well, OK.’ We went into your room and we went into the attic. Then he started telling me weird things. Then he went behind me and touched my privates.”

“Which privates did he touch?”

“He touched your front part?”

Dylan says her adopted father told her, “Do not move, I have to do this”:

“But I wiggled my bum to see what he was doing. He said, ‘Don’t move, I have to do this. If you stay still we can go to Paris.’”

To Paris? Yes, Dylan says there was some kind of bribe involved, with the celebrated filmmaker telling her, “Because this way you could be in my movie, if I do this.” Dylan then says to Mia:

Adult Dylan, who wrote an open letter published in the New York Times in 2014 officially accusing Woody again, recalls the trauma she spoke about on the tape:

“Then he sexually assaulted me. And I remember just focusing on my brother’s train set. And then… he just stopped. He was done. And we just went downstairs.”

Speaking about the video accusation all these years later, she says:

We cannot believe this footage has never seen the light of day before. How is it that this didn’t convince the authorities? According to documents from the time shown in the film, a psych report from the Yale New Haven Hospital child sexual abuse clinic determined Dylan was not a reliable witness. Investigators pointed to inconsistencies in her statement and thought she had a “rehearsed quality” on the video.

Even still, prosecutors apparently did find enough probable cause for an arrest warrant for 1st and 4th degree sexual assault of a minor, and yet… they chose not to move forward, reportedly because Dylan was considered too mentally fragile due to her age. Um… what?? If that’s the standard, do they ever prosecute child molestation cases??

Allen has long denied any molestation ever occurred. He has, however, been fairly open about his affair with Mia’s adopted daughter Soon-Yi, whom he married in 1997. The two are still together.

We can’t wait to see this doc — or the impact it might have on the public perception of Woody Allen, who has kept making movies and winning awards for decades after the allegations were first made.