Can Facebook’s Substack Rival Get Creators to Jump Ship?

It was probably only a matter of time before Facebook created its own newsletter product.

Last week, the tech giant unveiled its Substack rival called Bulletin, billing it as a home for independent creators and writers to publish their newsletters and podcasts. It rallied high-profile writers and authors from Malcolm Gladwell and Mitch Albom to Tan France and Dorie Greenspan to join its exclusive site. And it’s free to use, for now.

The newsletter medium continues to grow amid a competitive content world, with tech companies and brands increasingly turning to content marketing, e-commerce and in-house publications. Recently, Twitter acquired Revue, and Substack has been gaining ground with half a million paying subscribers and hitting a $650 million valuation this year.

“We’ve really seen this trend emerge over the last couple of years where writers and reporters who are really knowledgeable about certain subjects from science to sports are finding there’s an audience out there that really does want to go deeper with them on the subjects that they’re experts in and that people are really passionate about,” Campbell Brown, head of news partnerships at Facebook, said on a livestream introducing Bulletin.

Strategically, Facebook has a pattern of spotting trends and innovation and then spinning out its own version — and it has the funds to repeatedly do so. Clubhouse and Snapchat Stories clones are recent examples, but perhaps Bulletin’s proposition is that content creators will get to tap into Facebook’s news channels by using its newsletter platform.

“Facebook continues to do what it does best,” Peter Csathy, chairman of CREATV Media, told TheWrap. “Wait for others to innovate, copy and then crush them. That’s their playbook. Facebook uses those smaller innovators as their R&D labs, while it gets to sit back and see what works in the marketplace.”

The company has launched a number of grants and programs as part of the Facebook Journalism Project, started in 2017 in an effort to work with, rather than against, the news industry. To start, Facebook has said it will spend at least $5 million to “support local journalists” and kickstart Bulletin. Last week, the company joined the ranks of companies valued at over a trillion dollars.

“Five million is such an insulting figure,” Angelo Carusone, president of nonprofit Media Matters for America, said in an interview. “This is more public relations than substantive policy or supporting and enabling local news … Fix your algorithm, stop recommending fake news websites when you can promote journalism content. There’s a lot of meaningful ways to support journalism. Bulletin is not one of them.” 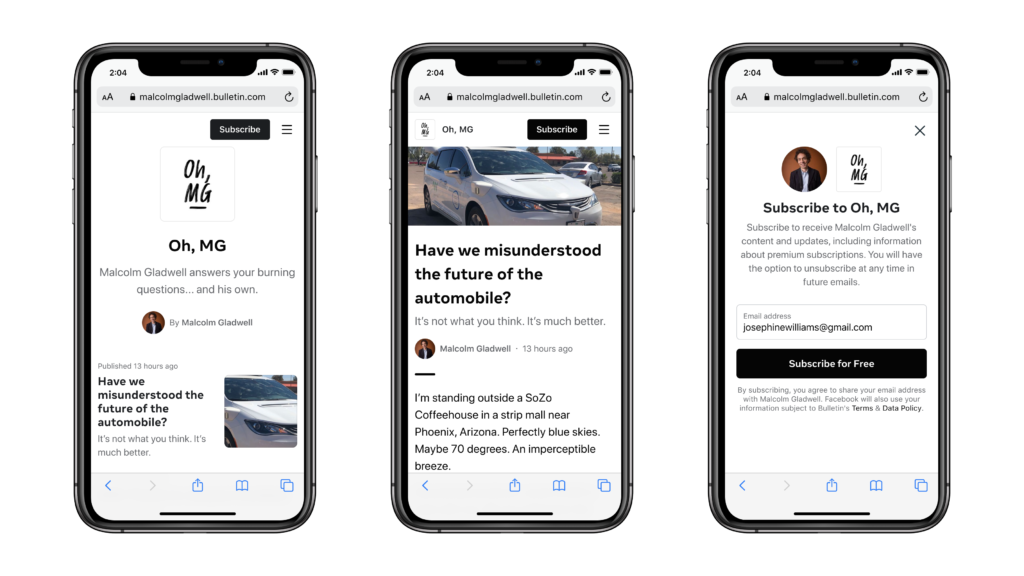 Yet for content creators, there is also a cost-benefit analysis to consider. The platform lives outside of Facebook, but Bulletin content will populate the Facebook News Feed and news tab — an added advantage for writers trying to maximize their reach.

The company said it will not take a cut “at launch,” whereas rivals Substack takes a 10% fee off of subscriptions and Revue takes 5%. Bulletin authors also get to retain full ownership over their work and subscribers should they choose to leave the service.

“It certainly will give other outlets, Substack, Medium and the rest, a challenge,” Rita McGrath, professor at Columbia Business School, told TheWrap. “It’s a small option for Facebook. I can’t imagine launching a newsletter is all that expensive, and if that’s where eyeballs are going to be spending time, that’s where Facebook needs to be.”

Right now, Bulletin is only available to U.S. creators, and they are no longer accepting applications. However, the company said that more local journalists are on the way, with CEO Mark Zuckerberg citing the importance of local news on his livestream.

“Local news is another really important area of journalism. What I think we can try to do here is try to make a real investment in local news, and see if Bulletin can be a way that local news writers can serve their communities and give people the kind of local information that is important to our lives as well,” Zuckerberg said.

When it comes to the news business, Facebook’s strained relations with journalists and publishers has been an ongoing challenge. Up until now, news organizations and journalists provided content to feed social networks, but most never saw a cut of that resulting profit. Facebook has since been trying to change its ways and start paying some publishers for their content while also building out its News section, curated by humans.

While a useful tool, some contend that newsletters are not comparable to publishing traditional news and journalism. “It’s not really journalism now, just like Substack is not journalism. In my mind journalism has editors. When you cut that out, it’s a little concerning to me,” Carusone said.

Either way, many visit major social media platforms, including Facebook and Twitter for their news fix. At the same time, if more news companies begin to paywall their content, Facebook’s access to actual news will become limited — so Bulletin can be Facebook’s way of luring talent and getting their audience to stay on its platforms.

“As traditional news players start to operate more behind paywalls and refuse to play nicely with Facebook, the content that people come to a platform like Facebook for becomes potentially harder to scoop up, so the more reasons people have to visit the platform the better as far as Facebook is concerned,” McGrath said.