After a teary Lizzo said she was ‘hurt so hard’ by ‘racist’ and ‘fatphobic’ comments over her ‘Rumors’ video, Cardi B stepped in and told the trolls to sit down and shut up.

“When you stand up for yourself, they claim your problematic [and] sensitive. When you don’t, they tear you apart until you crying like this,” Cardi B tweeted on Sunday (Aug. 15) while sharing a clip from a recent Lizzo Instagram Live session where the “Good As Hell” singer broke down after all the hate she received following the release of her new “Rumors” single. Cardi, 28, defended Lizzo, 33, from the haters, saying, “Whether you skinny, big, [or] plastic, they going to always try to put their insecurities on you. Remember, these are nerds looking at the popular table.”

“ ‘Rumors’ is doing great,” Cardi added. “Stop trying to say the song is flopping to dismiss a woman[sic] emotions on bullying or acting like they need sympathy. The song is top 10 on all platforms. Body shaming and callin’ her mammy is mean [and] racist as f-ck.” When someone seemingly disagreed with Cardi’s point in a now-deleted Tweet, the “Up” rapper clapped back. “But the song is doing great !! On all platforms. When people callin you ‘mammy’ cause your(sic) a black woman makin pop music and thousands of people callin you names it gets to you.” Cardi pointed out that the user’s bio “says ‘black everything’ I guess it don’t apply to black women  emotions huh?”

Lizzo opened up about the comments during an IG Live session over the weekend. “On the days I feel I should be the happiest … I feel so down,” she said while sitting in her bathroom, dabbing the tears in her eyes.“Like, I hurt so hard.” While Lizzo didn’t want to read off the messages, she did say that people were “saying sh-t about me that just doesn’t even make sense. It’s fat-phobic, and it’s racist, and it’s hurtful. If you don’t like my music, cool. If you don’t like ‘Rumors,’ the song, cool. But a lot of people don’t like me because of the way I look? And I’m like?”

“Sometimes I feel like the world just don’t love me back,” she said while wiping away her tears. “It’s like it doesn’t matter how much positive energy you put into the world, you’re still going to have people who have something mean to say about you. And for the most part, it doesn’t hurt my feelings — I don’t care. I just think when I’m working this hard, my tolerance gets lower. My patience is lower. I’m more sensitive. And it gets to me.” 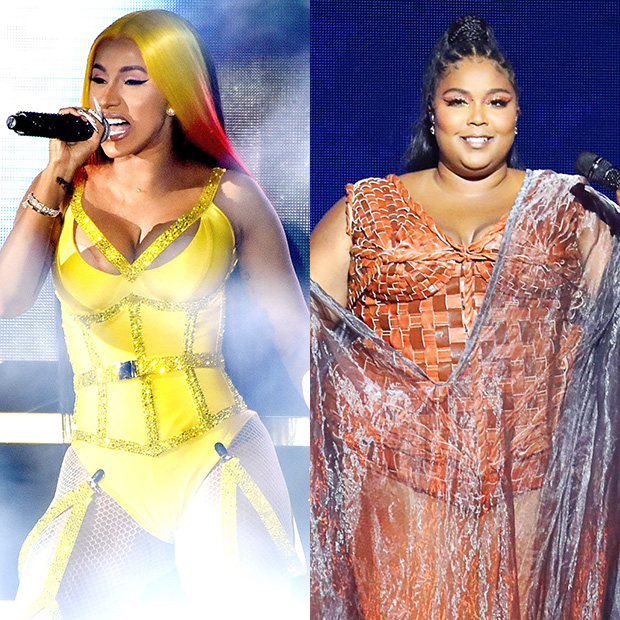 In the near thirteen-minute session, Lizzo told off the people “that just always have something negative to say about me, that has nothing to do with music, or the content of my character, or me as an artist, and just has everything to do with my body or whatever trope you think I fall into,” and that they’re going to be the ones “catching up” to the joy she brings. She also said that she’s only going to focus on the positive comments going forth because she doesn’t have time for the “negativity, your internalized self-hatred that you protect onto me with your racism and your fatphobia. I don’t have time for it.”

Lizzo gave love to “Rumors” collaborator during her IG Live sessions, saying that Cardi “worked her f-cking ass on” and that both Atlantic Records and team Lizzo “went hard” with this new song. But, the “racist and fatphobic and hurtful” comments got under her skin.

“I think I’m just overwhelmed,” she added. “I think I’ve been in shock ever since the song came out, and I’ve been like ‘Tequila! Turn up! And Work!” I haven’t really been able to sit and just congratulate myself. Like, I did it. I dropped a song. I said everything I wanted to say. I make music that I like, that’s important to me, and I make music that I hope helps people. Period. I’m not making music for white people. I’m not making music for anybody. I’m a Black woman making music. I make Black music. Period. I’m not serving anyone by myself. Everyone is invited to a Lizzo show, to a Lizzo song. To this good energy. Everybody’s invited.”