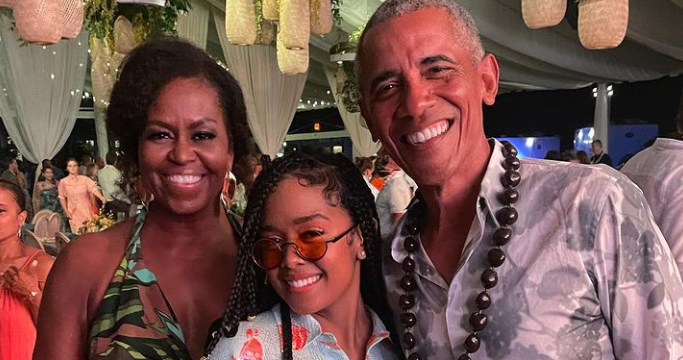 Barack Obama welcomed an intimate number of celebrities to celebrate his 60th birthday party this weekend, making for one star-studded guest list.

Chrissy Teigen, H.E.R. and Gabrielle Union were among the stars who flocked to Martha’s Vineyard on Saturday for the former President of the United States’ milestone birthday.

The event had been shrouded in controversy after Obama was forced to cut the guest list down from close to 700 people after concerns over health and safety as the Delta Variant of Covid continues to spread across the US.

His spokesperson instead confirmed that the guest list would be reserved for ‘family and close friends’ and it looks like that included a string of Obama’s favourite A-listers.

Chrissy and husband John Legend jetted over to Martha’s Vineyard with their children, Luna and Miles, but it’s unlikely the kids would’ve stayed up for the party. The former model shared clips of her getting glammed up for the star-studded night alongside videos of her strutting down a staircase wearing a floaty and pleated dress complete with a cape.

‘Well that was magical. goodnight Martha’s Vineyard. I have fallen in love with you hard!!’ Chrissy captioned one Instagram post as John left a lusty comment, writing: ‘Fine AF.’

Grammy-winning singer H.E.R. looked pleased as punch to bag an invite and shared a photo of her posing with Obama and his wife, former First Lady Michelle Obama, as well as other guests.

‘HAPPY BIRTHDAY TO THE COOLEST @barackobama surprise!! I’m grateful to have been able to celebrate with you and your family SAFELY,’ she wrote, throwing in some slight shade at the criticism of Obama’s large guest list.

Bring It On actress Gabrielle shared photos of her and husband Dwyane Wade dressed up for the ball, with her stunning in a one-shouldered pink gown and the retired NBA player donning a beige blazer with matching shorts.

Soul singer Erykah Badu shared brief clips of her hanging out with a friend on the dancefloor.

Among the other stars reported to have attended, include actor Don Cheadle and Beyonce and Jay Z, who are known to have a close friendship with the Obamas.

Obama, who turned 60 last Wednesday, had planned to host almost 500 guests and 200 hired staff members at the party near Provincetown, Massachusetts. It took place at his $12million, 30-acre waterfront property.

In a statement, Obama’s spokeswoman, Hannah Hankins, told The New York Times: ‘Due to the new spread of the Delta variant over the past week, the President and Mrs. Obama have decided to significantly scale back the event to include only family and close friends.

‘He’s appreciative of others sending their birthday wishes from afar and looks forward to seeing people soon.’