The former NFL star shares one of his parenting tips with his Twitter followers, but instead of praises, he receives backlash for being too harsh on his daughter.

AceShowbiz –Chad Ochocinco (Chad Johnson) seemingly will make sure to teach his kids to work hard to earn what they want. The former NFL star shared one of his parenting tips with his Twitter followers over the weekend. However, instead of praises, he received backlash for being too harsh on his daughter.

In the Saturday, April 24 post, Chad shared a screenshot of his conversation with one of his seven kids who asked him to get her a pair of Yeezy shoes in Token Miami. To that, Chad responded, “You said you were getting a job, I worked at McDonald’s by Edison to attain extra stuff i wanted in high school.”

“When I finish school I’m getting one. How imma get a job and I have school & track practice to attend throughout the day,” his daughter argued. Still, Chad insisted, “I caught the bus to school, then went to football practice, caught the bus to McDonald’s for a 6hr shift all while maintaining a 2.2 gpa & being a star athlete.” 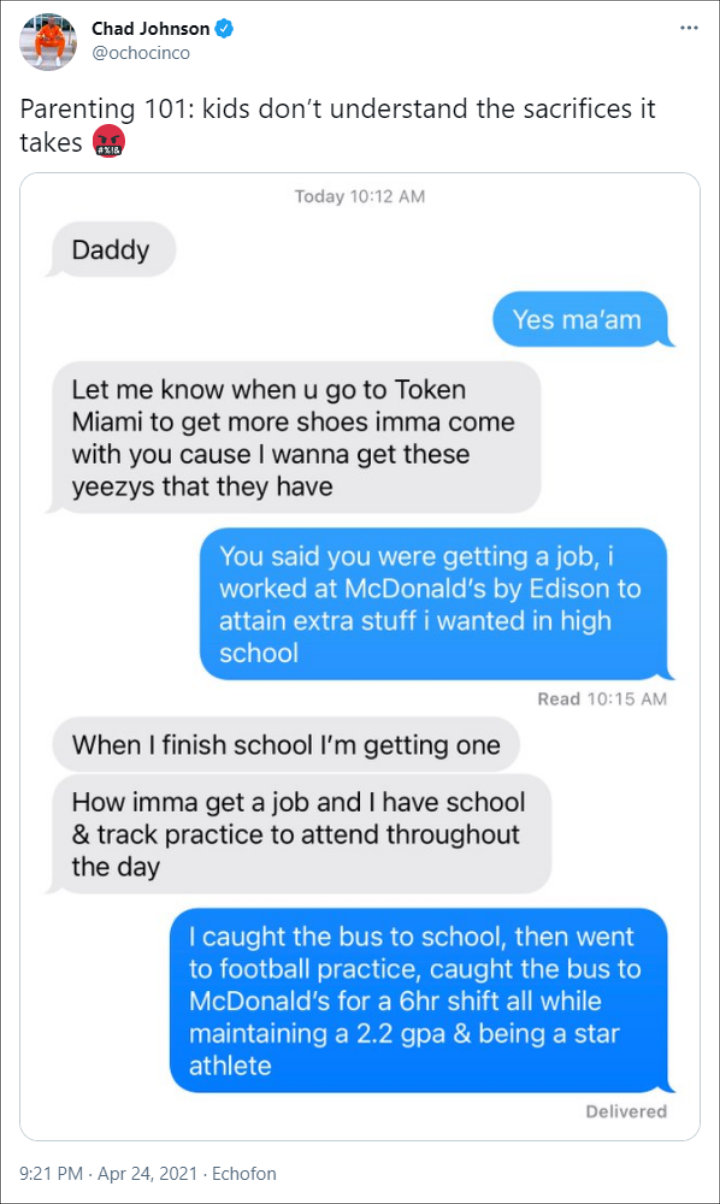 Chad Ochocinco is slammed over his parenting.

Fans, however, were not impressed with his response. “i’m not saying a child should get everything they want (not need ) but this mentality of ‘i struggled so you should too’ from parents is so weird to me,” a critic commented. “did you not work harder so that your kids can have an eaiser life than you did mr. 2.2 gpa,” asked one person, while another user simply stated, “Omg grateful you are not my father.”

Some others defended Chad though with one saying, “You can’t give your kids everything they want when they want or they’ll always expect things given to them. They have to work for what they want and see what it’s like to earn their own.”

“Not having yeezys in your closet isnt a ‘sacrifice’. My argument was that if you want something that isnt a necessity, then you should use your own money. If you dont have any money then you obviously dont need that specific item,” another person said.

Meanwhile, some others made fun of Chad for bragging about “maintaining a 2.2 gpa.” In his defense, some people tried to explain that getting a 2.2 gpa was good enough for an athlete. “Not every student is a A or B student and when you factor sports , practice AND a job a C average is admirable,” one person stated. “when you work, have practice, and have homework, it is HARD to get a high gpa. i managed to have a 3.4 during football season maybe ONCE. the other years it was lower,” someone else added.