Dax Shepard has no problem poking fun at his wife, Kristen Bell. The 46-year-old actor filmed Bell, 40, trying out cryotherapy on Wednesday.

For the process of exposing her body to subzero temperatures, the mother of two rocked a purple bikini, sweatband, boots and mittens.

“You look like a Bond villain girl? One of the two,” Shepard quipped to his wife from off camera. “Like, you’re in Sweden skiing after James, but for some reason you’re in a bathing suit and wearing your mittens?”

“Typical babe in an action movie,” Bell replied. “We don’t need no armor.”

Bell then entered the cryo chamber which she said was set at -169 degrees.

After exiting, Bell claimed, “I think I am ready to graduate to intermediate.” 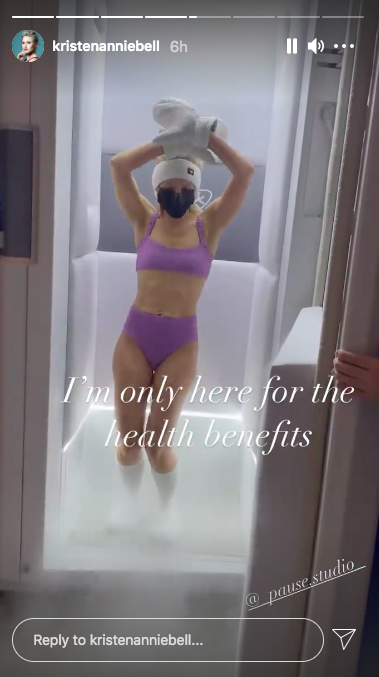 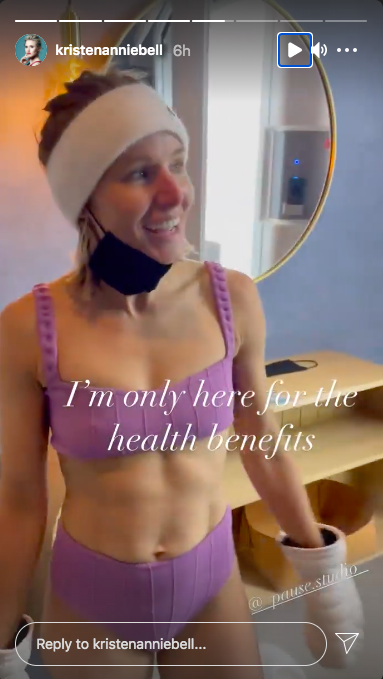 The Frozen 2 star noted in her Instagram Stories posts that she’s “only here for the health benefits.” According to WebMD, though not FDA-approved, cryotherapy has been used to help speed up recovery and treat arthritis, asthma, and anxiety.

Though they have a great back and forth on Instagram, Bell recently spoke on The Ellen DeGeneres Show about going to therapy separately from Shepard so they can “talk s**t about each other.”

“Currently, what we’ve been doing for the past couple of months, every two weeks or so, I’ll go see [our therapist] on Zoom and complain about Dax, and then he’ll give me all the reasons why I’m wrong, and then Dax will do the same and then by the time we meet up in the evening, we love each other again,” she shared.