“The Voice” judges Nick Jonas, Blake Shelton, John Legend, and Kelly Clarkson got together for the August 16 episode of Clarkson’s talk show to play a game of “Throw Me a Line.” The judges had to guess lyrics from popular songs based on one line, and everything was moving along until lines from Stefani’s “Hollaback Girl” appeared on the screen. Clarkson sang right along to “A few times I’ve been around that track / So it’s not just gonna happen like that” … as Shelton did not appear to recognize the lyrics before his opponents.

“It’s coming down!,” Kelly exclaimed as she removed Shelton’s portrait from the show’s “Wall of Champions.” Shelton seemed more upset at the removal of his photo than not knowing the lyrics to one of his wife’s songs! Either way, as he stood there with a bit of a blank stare and a mild shake of the head in disapproval, it’s clear he has some work to do.

Even though this was a huge miss for Shelton, what is married life really like for him and Stefani? Keep reading for more details.

Blake may not have recognized Gwen Stefani's song, but she loves married life so far 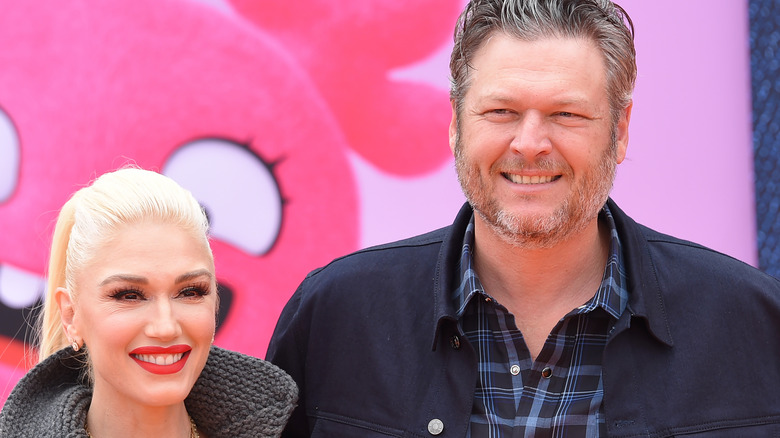 Blake Shelton and Gwen Stefani married at his Oklahoma ranch on July 3 (via People) and it’s been bliss ever since. So let’s just call this song-guessing gaff a bump in the road!

“It was absolutely a picture-perfect intimate wedding with family. Everyone at the wedding was so thrilled to see Gwen and Blake finally get married,” a source told ET Online on July 6. “They have been talking about a wedding for so long and wanted nothing more than to officially call themselves a family. It was a fairy-tale experience even for the guests,” the source continued.

Stefani is apparently over the moon now that she’s finally married to Shelton, as she said on a July podcast episode of “Tell Me About It.” “It was literally one of the greatest moments of my life, obviously,” she said of her wedding day. “It was beyond what I thought it was gonna be.” She also revealed that Shelton’s “authenticity” was one of the main reasons why she fell in love with him. “He’s very real and consistent and genuine. It’s what is so attractive and why people love him so much,” she added.

We love all of that, but Blake, you gotta know your wife’s tunes a little quicker. “Blake better spend some serious time with Gwen’s music!” as one YouTube commenter wrote. We agree!