As a news anchor best known for his waggish quips when reporting on the love lives of the Royal Family, Simon McCoy was seen to be punching above his weight when he married 1980s pin-up Emma Samms last October.

Now, the former BBC and GB News presenter is having to get used to be photographed by paparazzi.

‘Simon and I got papped in Cheltenham this afternoon,’ says the 61-year-old actress, who lives with McCoy, 60, in the Cotswolds. 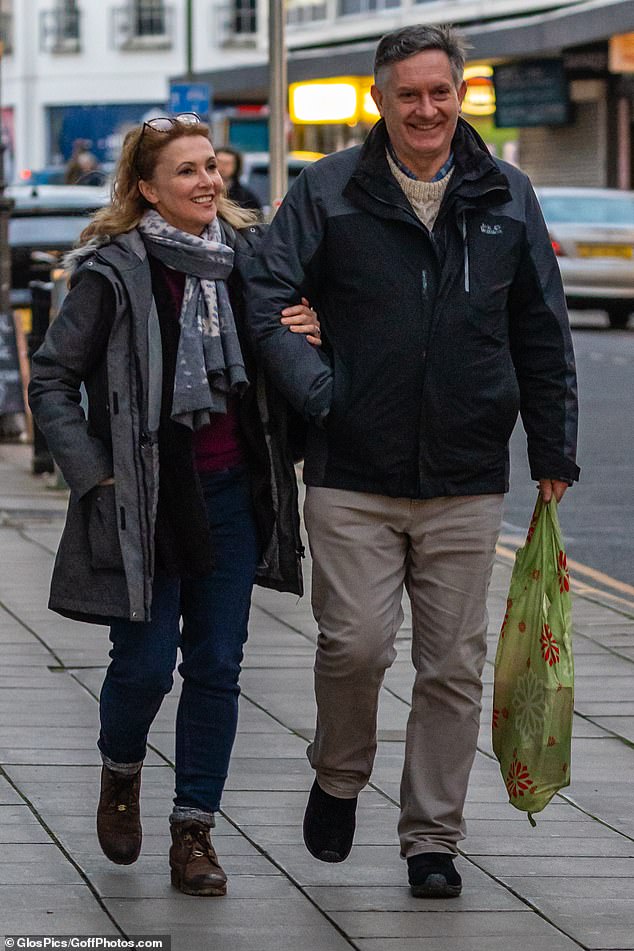 Dynasty actress Emma Samms MBE and her husband, the former newsreader Simon McCoy, out together in Cheltenham last week 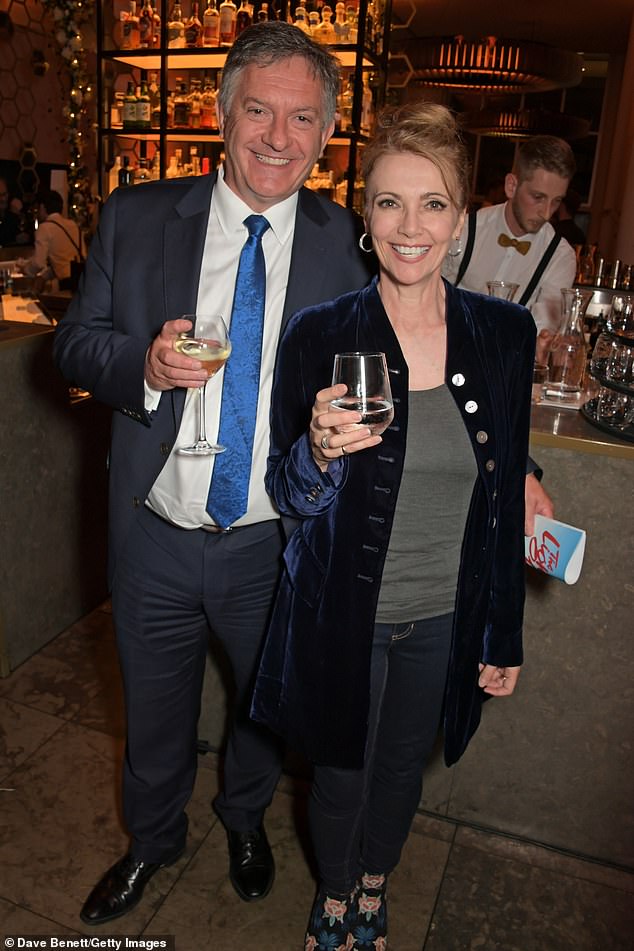 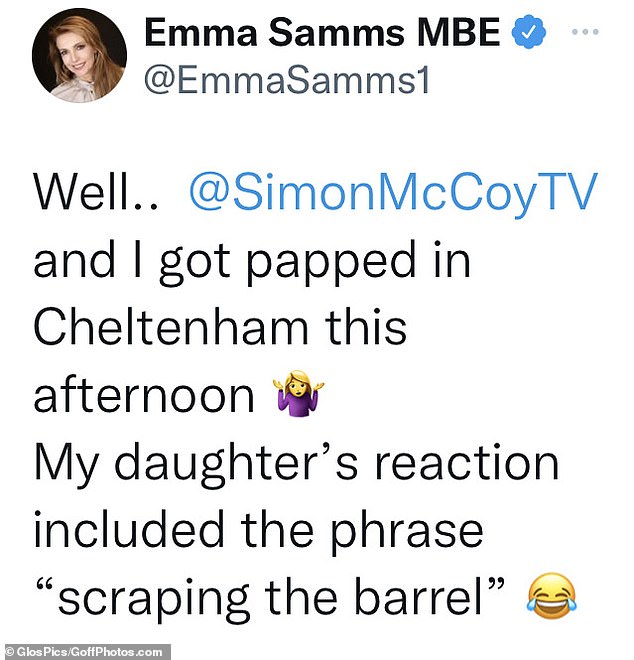 She’s a national treasure who was handed a damehood by the Queen before winning an Oscar for playing Her Majesty.

But now Dame Helen Mirren has declared that she’s an American.

The celebrated actress, 76, has revealed that she sought U.S. citizenship after realising that her allegiances were to America during the 2001 terrorist attacks on the Twin Towers in New York.

‘I saw the second tower come down. I had an epiphany,’ explains Dame Helen, who was living in New York at the time.

‘I realised where my allegiance and my heart and my intellect lay in that confrontation between extremism, religiosity — all those things and everything that America represents.

‘And I thought, “I’m an American”. I got an American flag and I put it outside my window.’

She suggests that the only reason it took her until 2016 to acquire dual citizenship was because she hadn’t previously realised you could have both. 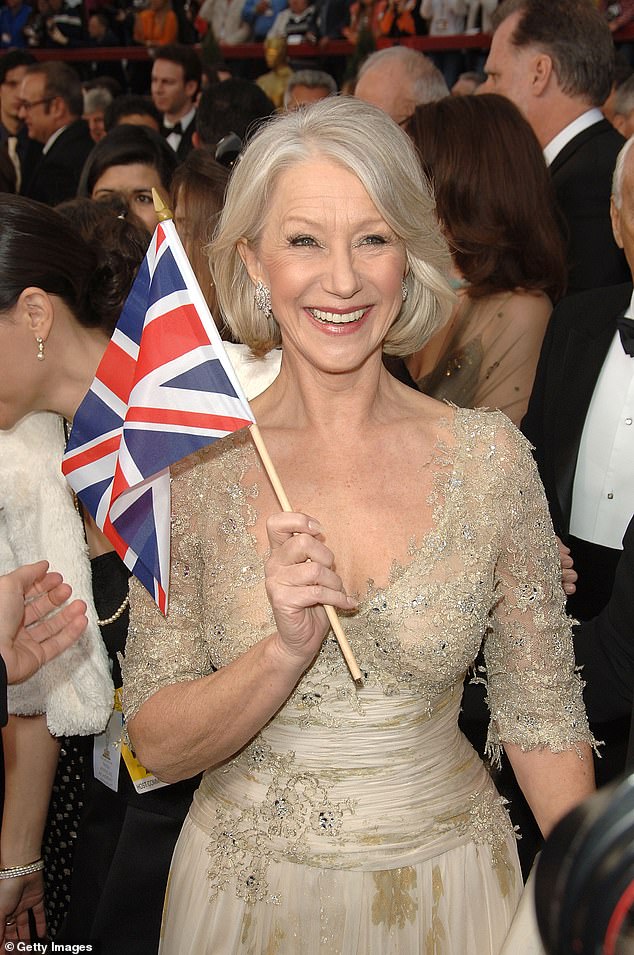 Dame Helen Mirren (pictured in 2007) has revealed that she sought U.S. citizenship after realising that her allegiances were to America during the 2001 terrorist attacks on the Twin Towers

‘When I understood, which I hadn’t quite grasped before, that I could be a British citizen and an American citizen — because I would not like to give up my British citizenship — then I thought, “Well, that’s great”.’

Dame Helen, who also played Elizabeth I, does admit there were practical reasons involved.

‘My husband [film director Taylor Hackford] is American. My stepchildren are American.

‘My nephew lived in America, worked in America. So I had certainly been an American resident for a very long time.’

The couple have homes in Wapping, East London; Italy and Lake Tahoe, Nevada.

In 2012, she criticised our ‘narrowness of vision’, claiming that Americans are less cynical.

‘The one thing I really don’t mind escaping, when I go away, is the alacrity with which Brits like to put people down,’ she said.

‘Sometimes there’s a narrowness of vision in the UK — maybe it’s partly an island mentality. In America they are less cynical and maybe a bit more naive.

‘Brits are somehow more critical and mealy-mouthed. And there can be a sense of small-minded jealousy sometimes.’

Modfather Paul Weller’s daughter Dylan is a fashion stylist, but wouldn’t want to dress the Duchess of Sussex.

Asked if she’d like to style Meghan, Dylan, 25, whose mother is make-up artist Lucy Halperin, replies: ‘Not really. My mum does make-up for a lot of different actors and actresses, so I would love to collaborate with her one day.’

When Sir Billy Connolly’s daughter Cara started going out with boys, he left one of them shocked with his first comment when they were introduced.

The comedian, 79, who wasn’t scared of a fight during his tough Glaswegian upbringing, says: ‘When Cara brought her boyfriend along, he said: “Hello Mr Connolly”.

The Toff ‘tarts’ up for night with ‘oligarchs’

If president Putin orders an invasion of Ukraine, super-rich Russians in London may be hit by sanctions.

So Georgia Toffolo is determined to party while she still can.

The I’m A Celebrity winner, 27, attended a Oligarchs and Olitarts party at the weekend, where she posed with a fellow reveller dressed in a ushanka — Russian fur cap — and leather gloves, and pointing a toy gun at her. 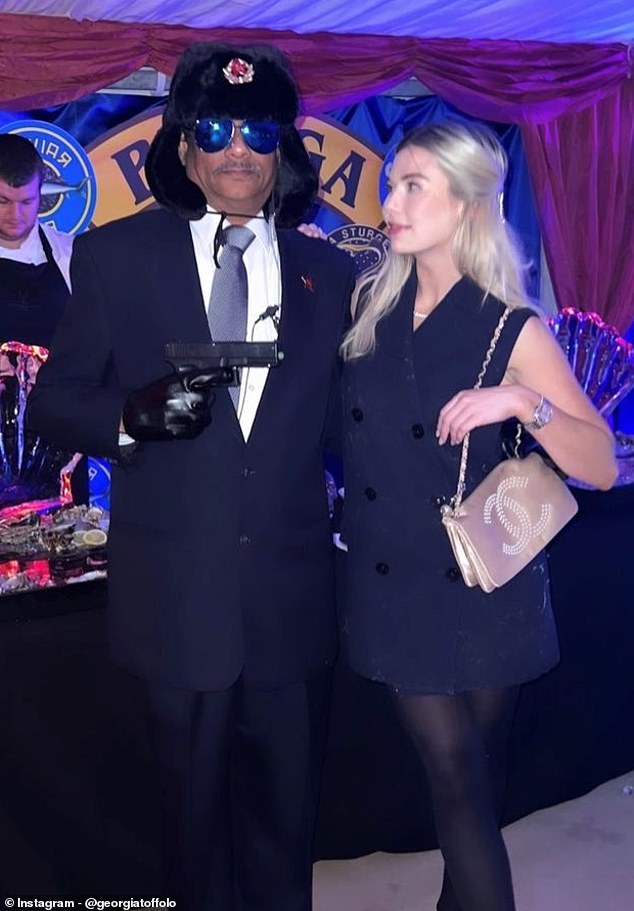 Georgia Toffolo attended a Oligarchs and Olitarts party at the weekend, where she posed with a fellow reveller dressed in a ushanka

‘Oligarchs and Olitarts Party,’ the former Made in Chelsea star gushes. ‘So fun.’

Toff was previously squired by George Cottrell — a disgraced former aide to Nigel Farage — who was jailed in America in connection with a money laundering conspiracy.

The aristocrat, known as ‘Posh George’, was arrested for extortion, money laundering and fraud in 2016, but he was released from prison after agreeing a plea deal for a count of wire fraud.

Troubled model Lottie Moss insists on dressing up for her stay at a rehabilitation centre, where she is being treated for cocaine addiction.

The 24-year-old half-sister of supermodel Kate Moss remarks: ‘Are you telling me not everyone brings ‘stripper heels’ to rehab?’

Known for his extravagance, Prince Charles is advertising for not one, not two, but THREE chefs.

The heir to the throne requires a head chef as well as a chef de partie for his country home, Highgrove, in Gloucestershire — plus a sous chef to cook for him and his wife Camilla.

‘The chefs team is responsible for the preparation, cooking and presentation of food for the Royal Family and employees at all royal residences,’ explains the advert on the royal website.

Crucially, pot-stirrers with loose lips need not apply, as applicants must be ‘tactful and courteous, with the ability to maintain confidentiality and discretion at all times’.

Amanda helps her fallen love back on his feet

For it was also the day that the television stuntman, 42, was discharged from hospital after four months.

The Welshman was left fighting for his life after he fell 70ft and was crushed between two cars, which exploded in a ball of fire on Simon Cowell’s show America’s Got Talent: Extreme. 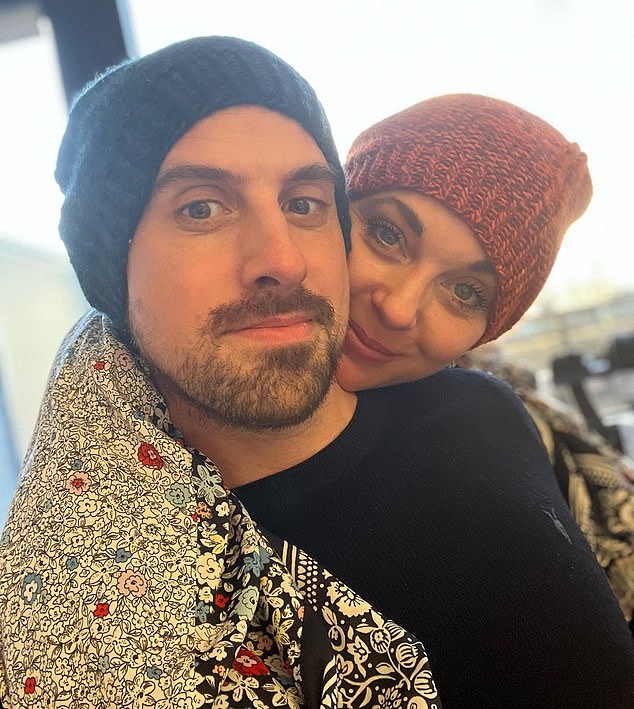 ‘Finally out of hospital,’ Goodwin says. ‘My birthday today. Can’t think of a better way to spend it than with my love.’

Abbington, 47, who has two children with Sherlock co-star Martin Freeman, has said she is ‘besotted’ with Goodwin.