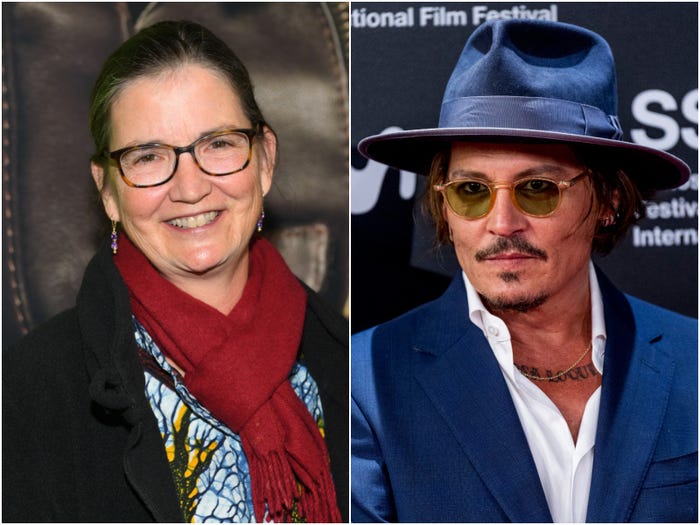 "Edward Scissorhands" screenwriter Caroline Thompson told Insider that Johnny Depp used to greet her "at the door every morning with a margarita."

Thompson was speaking to Insider about "Edward Scissorhands," which Depp starred in and which is celebrating its 30th anniversary this year, as well as "The Nightmare Before Christmas," which celebrates its 17th anniversary.

Thompson told Insider that years after they worked together on "Edward Scissorhands," she and Depp happened to be doing sound work on different movies at the same sound studio in Hollywood.

"He would greet me at the door every morning with a margarita. What could be better than that?" Thompson said. The screenwriter, who also wrote "Corpse Bride" and directed "Black Beauty," said that she would "love to go and hang out" with Depp again.

"But I don't drink anymore so I don't know if that's feasible," Thompson said. "Alcohol is really fun until it isn't anymore. We all had fun once, and we all functioned under the fun once. It's always fun until someone loses an eye or something."

Thompson told Insider that she hopes Depp's career can recover from the libel trial Depp recently lost, and said that the allegations against the actor made her "really sad." Thompson said that she suspects Depp has "gotten really lost at times in his life."

The Sun wrote that Depp was a "wife-beater" in relation to his marriage to Amber Heard, who alleges that he physically abused her. Depp denies all allegations against him, and attempted to sue British newspaper The Sun over their use of the phrase "wife-beater." Judge Andrew Nicol, however, ruled that there was enough evidence for The Sun to be able to use that phrase.

After the trial, Depp says he was asked to resign from his role in the "Harry Potter" spinoff movie "Fantastic Beasts 3" (though he will reportedly still receive his eight-figure salary). Actor Mads Mikkelsen will be replacing Depp in the role. Some people now say that following the trial, Depp's career in Hollywood could be effectively over.

But Thompson says she prefers to think of Depp the way she remembers him.

"I don't want to think badly of Johnny. I only want to think well of Johnny, and I know he's a sweet man," Thompson told Insider, before recounting the last time she saw him back in 2011.

"I was fortunate enough to be given an award at the Austin Film Festival," Thompson said, telling Insider she was being awarded alongside John Lasseter and another TV writer. "Johnny came and gave me my award, which was really remarkable of him, very sweet of him. He was always really warm and welcoming."