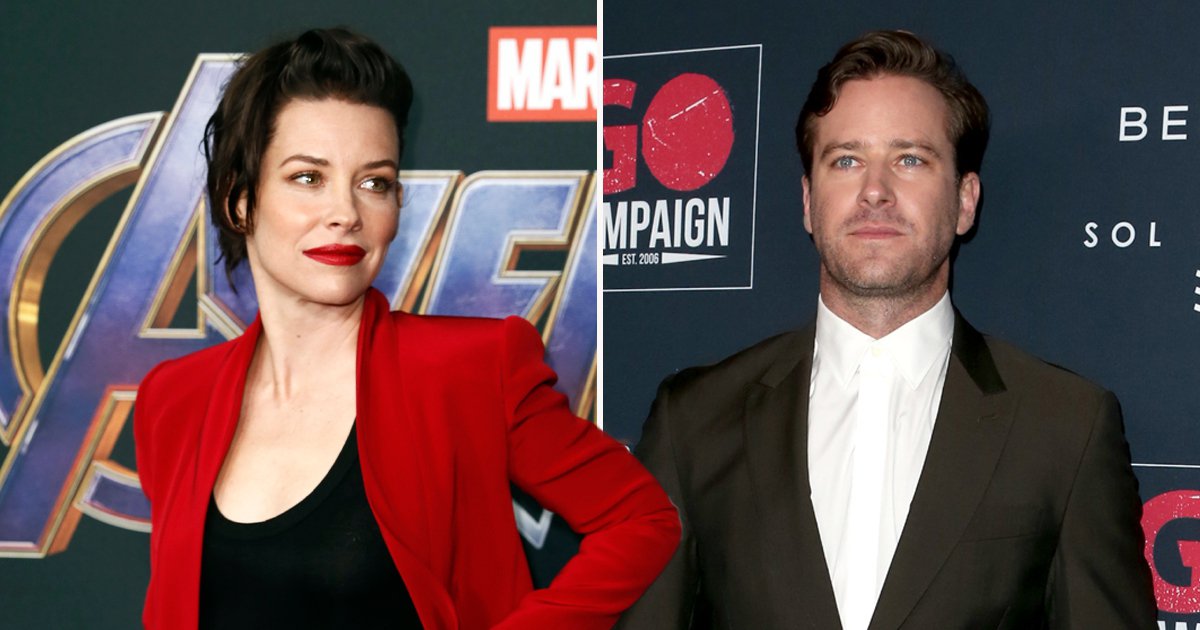 Armie, 36, has found himself at the centre of scandal recently, due to the leak of DMs attributed to him which involved disturbing sexual fantasies.

Crisis is the first of his projects to get a trailer since the scandal broke, with the drama telling three interweaving stories during the ongoing opioid crisis.

Evangeline plays an architect recovering from an oxycodone addiction who is attempting to track down her missing son, and the 41-year-old was excited to share the poster for Crisis on social media.

The poster features images of Evangeline, Armie, who plays a drug smuggler, and Gary Oldman, who plays a university professor in the movie, and Evangeline only seemed keen to recognise one of her co-stars.

The Ant-Man star shared the poster on Instagram and wrote: ‘I am proud to be a part of a hard-hitting thriller that tackles the issues that surround an industry that profits from addiction (and proud to be in this poster with #GaryOldman. 😍😄).’

House Of Effie, the anonymous account that first shared Hammer’s alleged DMs, noticed the snub, commenting: ‘Lol I see what you did there.’

Evangeline continued on a separate post: ‘Crisis was the most demanding role I’ve ever played. I dove deeply into the space of addiction, facing many of my own demons in the process.

‘I researched on-line, read addiction chat forums, went to an NA meeting, consulted workers at my local rehab center and personally went through the twelve steps of recovery. I learned so much about myself and about the pain, brokenness, emptiness and devastation the legalization of opioids in the form of painkillers like oxycodone or hydrocodone has reaped.’

Armie did not promote the movie on his own social media, having been silent on his Instagram account since January 2.

It was confirmed that the actor would no longer be starring in Shotgun Wedding alongside Jennifer Lopez, as he could not leave his children to go film in the Dominican Republic.

He said: ‘I’m not responding to these bulls**t claims but in light of the vicious and spurious online attacks against me, I cannot in good conscience now leave my children for four months to shoot a film in the Dominican Republic.

‘Lionsgate is supporting me in this and I’m grateful to them for that.’

However, as well as Crisis, we can expect to see Armie in Death on the Nile, the release date of which was pushed back from 2020, and Taika Waititi’s film Next Goal Wins.

In addition to the DMs, which detail cannibalism fantasies, one of Armie’s exes Paige Lorenze has alleged that the Call Me By Your Name actor carved his initial into her groin during sex.

She told the Daily Mail: ‘I froze as he smiled at his work. He then said the cut was not deep enough, even though it was about an inch – the whole tip of the blade.

‘He said he wanted to collect a kitchen knife to make it bigger, but then as it bled, he started licking it.’

Paige also alleged that Armie spoke about having her ribs removed so he could barbecue them.

A lawyer for Armie said: ‘These assertions about Mr. Hammer are patently untrue. Any interactions with this person, or any partner of his, were completely consensual in that they were fully discussed, agreed upon, and mutually participatory.

‘The stories being perpetuated in the media are a misguided attempt to present a one-sided narrative with the goal of tarnishing Mr Hammer’s reputation, and communications from the individuals involved prove that.’