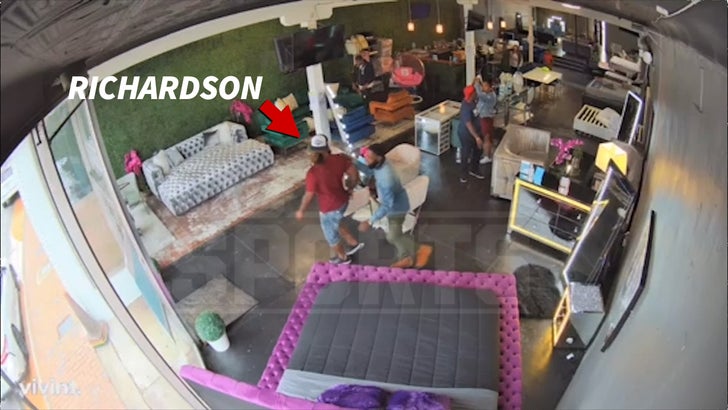 Scary moment for ex-NFL running back Trent Richardson — when a gun was pulled on him during a dispute at a furniture store, and the incident was captured on video.

… but the store owner claims Trent was the aggressor — and they only pulled out the gun to defend the shop.

Here’s what we know … the former Alabama star hit up the Furniture Plug store in Birmingham on Oct. 28 to deal with a complaint about a problem with a recent order. During the visit, the owner’s wife whipped out a firearm.

Surveillance video shows Trent and his manager leaving in a hurry — clearly concerned for their safety.

We spoke to the store manager who claims Trent was the aggressor — but the football player says that’s just not true.

Here’s Trent’s side as told by his manager …

Brandon Bowers tells TMZ Sports … Trent had ordered thousands of dollars worth of new furniture earlier in the year to be delivered to his home.

But, when it arrived, he says most of the items had significant damage — from tears in a couch, to a cracked bed frame … even a dresser that was missing handles and mirrors.

So, Bowers says Trent gave the store owner an ultimatum — either refund the money or replace the furniture with acceptable pieces.

We’re told Trent felt the store owners were giving him the runaround — so he went to the store on Oct. 28 with his manager to talk things out in person.

Bowers says the store owner got aggressive and at one point challenged the former #3 overall NFL Draft pick to a fight.

Trent declined — saying he wasn’t going to brawl with the man in front of his wife … and that’s when Bowers says the wife pulled out a pistol and began waving it around.

Bowers says he immediately grabbed Trent and bolted for the door — fearing for their lives. Now, Richardson is taking action — he intends to file a report with local police.

We also spoke with Furniture Plug owner Clint Catlin — who tells us, “We were protecting our store. Trent came in aggressive. My wife being her, she was protecting her space.”

“Trent’s a big guy, came in aggressive. He made her pull out the pistol. This is a family business. We were protecting our brand.”

We also spoke with Clint’s wife, Mariah, who says “I felt Clint’s life, my life and our 7-year-old’s life were threatened.”

As the furniture in question, Clint says the items were sent to Trent’s home in good condition and the photos are not a true reflection of what really happened.

He adds, “Trent received everything he paid for.”