“The allegations against me are as searing as they are false,” Florida Republican tells Axios 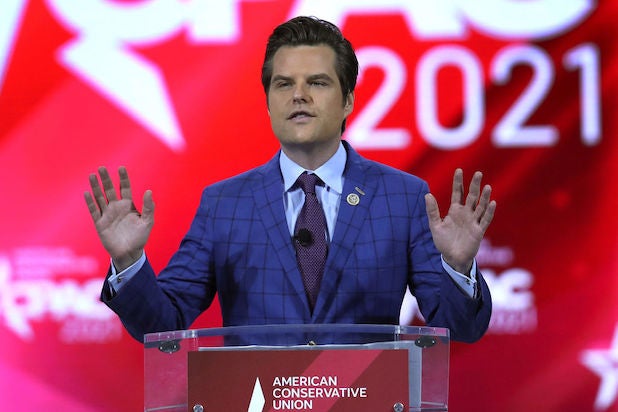 Rep. Matt Gaetz said on Tuesday he is being investigated by the Department of Justice for possible sexual misconduct.

“The allegations against me are as searing as they are false,” Gaetz told Axios. “I believe that there are people at the Department of Justice who are trying to criminalize my sexual conduct, you know when I was a single guy.”

Gaetz told Axios that the specifics of the investigation are “unclear” and that he’s been told “very little,” but according to three unnamed individuals who spoke to the New York Times, the DOJ is investigating whether Gaetz, 38, had a sexual relationship with a 17-year-old and paid for her to travel over state lines, thus possibly violating federal sex trafficking laws.

Spokespersons for Gaetz and the DOJ did not immediately respond to TheWrap’s requests for comment.

Gaetz also told Axios he believed he is the victim of an extortion scheme “against my family for $25 million … in exchange for making this case go away.” Axios reported that Gaetz provided what he said was documentation of the alleged scheme, and also accused “a former DOJ employee” of being behind it.

“I have definitely, in my single days, provided for women I’ve dated,” Gaetz told Axios. “You know, I’ve paid for flights, for hotel rooms. I’ve been, you know, generous as a partner. I think someone is trying to make that look criminal when it is not.”

The investigation was opened under Attorney General William Barr in the final months of Donald Trump’s presidency, according to the Times. The scrutiny placed on Gaetz’s behavior is part of a larger investigation into one of his political allies, a former Florida county tax collector named Joel Greenberg, who was indicted last summer on multiple federal charges, including for the sex trafficking of a minor. Greenberg has pleaded not guilty.

No charges have been brought against Gaetz at this time. Earlier this week, Axios reported that Gaetz is considering leaving Congress to pursue a gig at Newsmax. In December 2017, Gaetz was the only person in Congress to vote against a bill to combat human trafficking.