Many eyes watched Joe Biden meet with Queen Elizabeth II on June 13. Biden’s meeting with the queen was important for the United States, especially after the controversial meetings between President Donald Trump and the queen. Trump did not follow royal etiquette; the former president walked in front of Queen Elizabeth, per NBC News. But Biden compared the queen to his mother after he met her, and this comment raised eyebrows.

According to Politico, Biden met Queen Elizabeth on another official visit in 1982 when he was a U.S. Senator. As Senator Biden, he went to the United Kingdom in 1982 for meetings with the British-American Parliamentary Group. Presidential historian Douglas Brinkley told Politico, “It’s a mighty long ride from being Scranton Joe the Amtrak commuter to dining … with Queen Elizabeth, but they’ll get along fabulously. The wonderful thing about Biden is that he is comfortable with himself in any setting.”

Per Reuters, during her 69 years as queen, Queen Elizabeth has met with 13 of the 14 U.S. presidents who’ve served during her reign — all of them except for Lyndon Johnson. But how will Biden’s comparison affect his relationship with Queen Elizabeth? Keep reading to learn how President Biden compared the queen to his late mother. 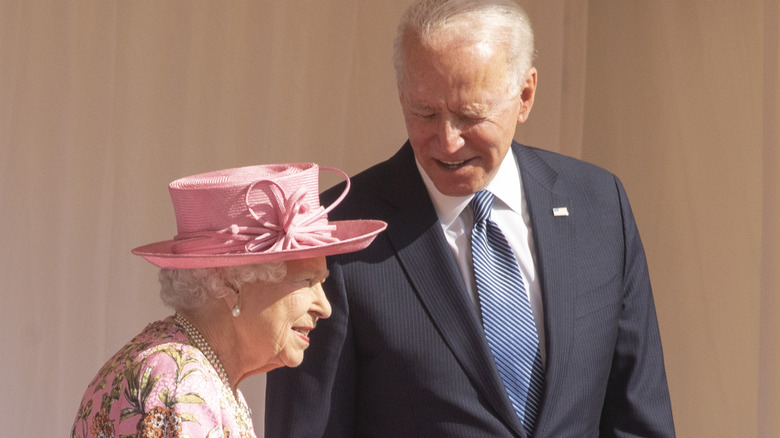 President Biden’s mother died in 2010, but he mentions the beloved matriarch in many public speeches. At her funeral mass, Biden described his mother. Biden said (via ABC News), “She was a quintessential combination of both optimism and pragmatism. Heroic in her ideals but solid in her expectations.” Biden continued, saying Jean Biden was “fiercely, fiercely protective of her family, deeply committed to her husband, and always loyal to her friends.” Sounds very much like Queen Elizabeth II. Reuters reported further on President Biden’s meeting with the queen. According to the outlet, President Biden said, “She’s extremely gracious, that’s not surprising, but we had a great talk.”

Still, fans’ reactions to Biden’s statement were mixed. One person tweeted that Biden comparing the queen to his mother is “implying she’s 120,” while another person tweeted that the comparison “brought tears to my eyes” because it shows that Biden “still sees her a person” despite her being, you know, the queen. But if Queen Elizabeth was happy with his statement, that’s what really matters.