Jennifer Aniston and Brad Pitt have sent the internet into multiple frenzies over the past two years with moments of interaction that many pointed to a potential rekindling of their romance. The pair was married for nearly five years before their split in 2005.

In September, Aniston, 52, appeared in a virtual reunion and table read of “Fast Times at Ridgemont High” in which she and Pitt, 57, reunited among a trove of other A-listers.

Fans also lost their collective minds when the “Friends” actress brushed past Pitt at the 2020 SAG Awards; cameras caught the pair exchanging friendly pleasantries complete with a brief handhold as the two quickly caught up.

Aniston was asked about the moment during a recent appearance on SiriusXM’s “The Howard Stern Show” as the shock jock probed her about the “awkward” exchange. 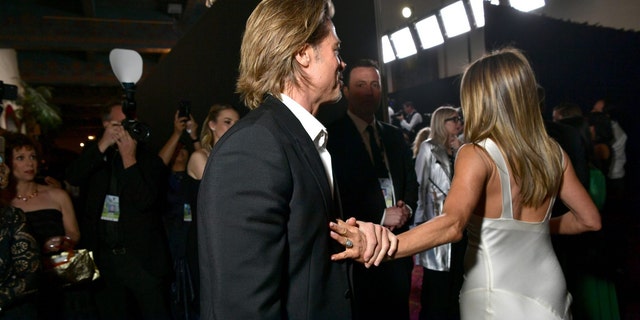 She told Stern it wasn’t weird at all.

“It was absolutely fun. You know, Brad and I are buddies,” Aniston said. “Like, we’re friends and we speak.”

“There’s no oddness at all,” she added, “except for everyone that probably watched it and was wanting there to be.”

Following their divorce in 2005, Aniston went on to marry Justin Theroux in 2015. The couple, who started dating in 2011, ultimately split in 2018. Pitt married Angelina Jolie in 2014. The former pair share six children together and are currently in the middle of a divorce.

Pitt and Aniston have sparked reconciliation rumors after admitting that they’re still good friends and hang out sometimes. The 56-year-old actor even attended her 50th birthday celebration as well as her star-studded holiday party in 2019. 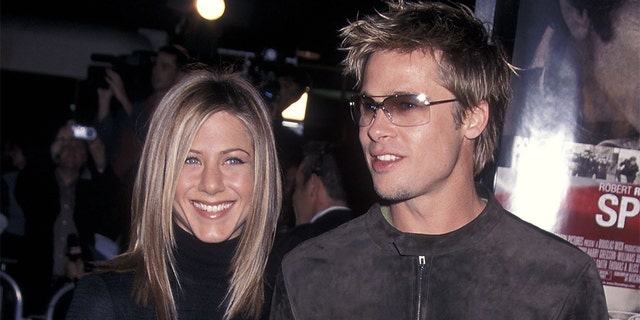 Jennifer Aniston and Brad Pitt were married for nearly five years until their split in 2005. (Photo by Ron Galella, Ltd./Ron Galella Collection via Getty Images)

Meanwhile, Aniston maintained to Stern that although she has not yet found love, she is “of course open to it.”

However, she pressed in the interview that she will not be joining any of the popular dating apps and is “doing just fine” without them.

“There’s nothing anonymous about it and I wouldn’t do that,” Aniston said of the elite dating app, Raya. “I don’t want to do that and I don’t need to do that. I’m all good.”