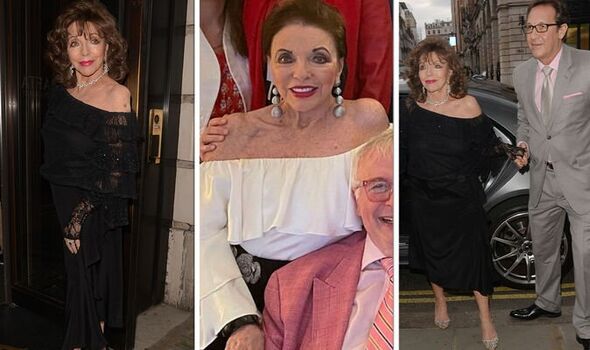 Dame Joan Collins wowed fans as she showed off her toned shoulders in a Bardot style top.

Dame Joan Collins looked sensational as she celebrated her 89th birthday on Monday alongside her beloved husband Percy Gibson, 56.

The Dynasty actress appeared much younger than her years as she flaunted her toned physique in a white Bardot style top.

Joan paired the look with a pair of beautiful chandelier earrings while tying her hair up to showcase her shoulders.

The Hollywood star made a bold statement with her makeup which included a bold red lipstick and a smokey eye look.

In the photo posted on Instagram yesterday, Joan was joined by her close friends, including the actor Christopher Biggins who appeared smart in a pink blazer.

Meanwhile, Percy appeared joyous as he grinned from ear to ear at the celebratory occasion.

Joan typed: “What a #swellparty #ahubby threw for me #goodfriends #goodfood #goodtimes #thankyou Jane and @lucyhanson1.”

Dame Joan has been flaunting her toned physique while enjoying a week of celebrations.

The actress donned a black midi dress with an asymmetric neckline and lace detail, complete with long sleeves.

She wore her brunette hair down for the event in her signature blow-dried style.

Dame Joan attended the launch of ‘Moschino’ by Assouline hosted by Jeremy Scott & Moschino on May 11.