Katie Holmes went on a mother-daughter shopping trip with Suri Cruise in NYC, coming away with bags of goodies as reports that her romance with Emilio Vitolo Jr. has ‘cooled.’

For practically all of autumn 2020, Katie Holmes was seen almost daily walking hand in hand in her SoHo neighborhood with her chef boyfriend Emilio Vitolo Jr. But he’s seemingly out of the picture these days with reports that things were “moving too fast,” as the 42-year-old actress has been spending more time out and about in NYC with her 15-year-old daughter Suri Cruise. The pair went on a marathon shopping spree to a number of stores on Sun. Apr. 25, coming away with numerous bags of purchases. You can see the photos here.

Katie looked casually chic in a Levi’s dark denim knee-length skirt. She paired it with a long sleeve white menswear style button up blouse. Initially the Miss Meadows actress wore black and white striped kitten heel shoes as they hit up a store during the daylight hours. But she traded in the footwear for more comfortable flat black $830 Gucci loafers by the time she and Suri wrapped up their day of retail therapy for their walk back home to their SoHo apartment. 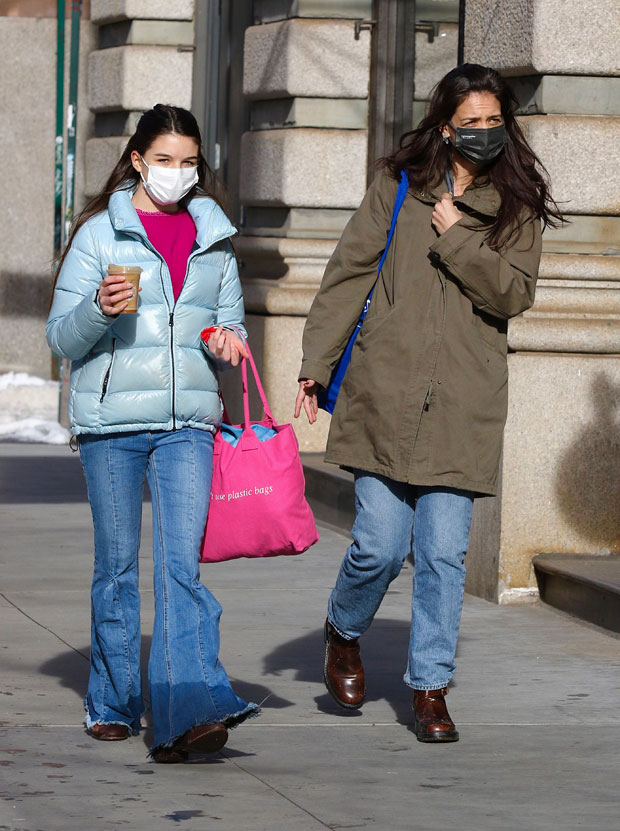 Suri kept her outfit super casual, wearing dark blue jeans, a hip-length blue jacket and a grey sweater underneath. She made sure her footwear was comfy for the entire day of shopping in a pair of sneakers. Suri’s long auburn locks are now nearly down to her waist, as she wore her wavy tresses down and flowing.

Both Katie and Suri were each carrying multiple bags of purchases by the end of their shopping spree. The teen held a white paper bag in one hand and had a larger red and white cloth bag over her right arm. Katie had two cloth bags over her shoulders, with one in grey and the other in white with colorful side patterns. Wherever the two went shopping, the stores are being eco-friendly with reusable bags. 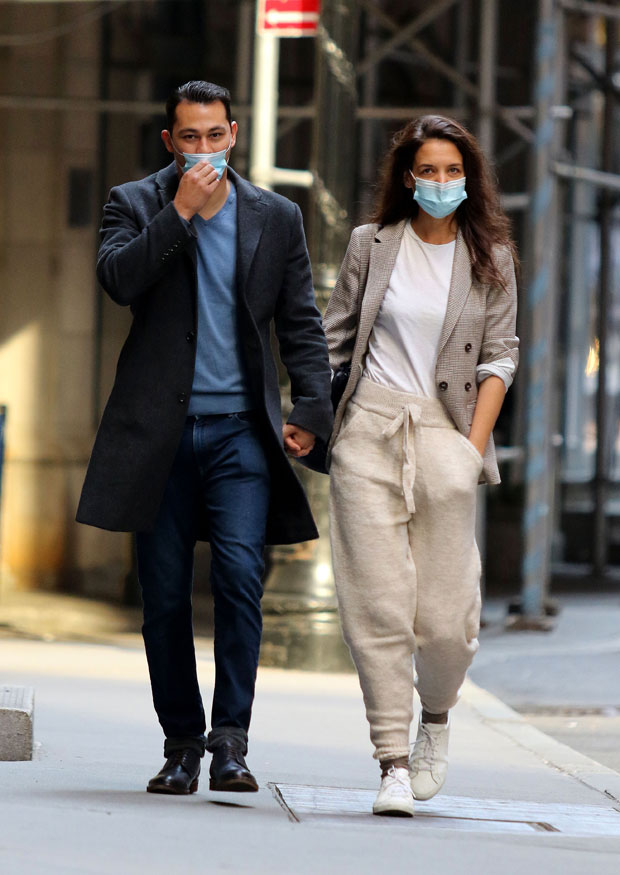 It’s been quite some time since Katie was spotted with Emilio, as they used to be photographed together and full of PDA on a near daily basis. There have been reports that the actress wanted to shift her focus off of her love life and more to being the mom of a teenager. “Katie has a lot of big priorities in her life — she’s a single mom. Her daughter always comes first and things were moving very fast,” a source Page Six on Apr. 22. The source confirmed that, while the two have not broken up, things have “cooled down” between them while Katie has been away filming a movie recently.