If Playboy makes you think of steamy photos more than it conjures up inspirational quotes about love, think again. Kylie Jenner and Travis Scott’s Playboy interview reveals exactly why the reality star and makeup mogul believes their relationship is so strong. The key to their success, she told the magazine, is that they’re able to weather stormy times together and come out stronger than ever before.

“We think the same and have the same goals and passions in life. Besides the fact that we have good chemistry, we have a lot of fun together,” Jenner told Scott, who interviewed her for the issue and asked why she believes their relationship works. "You’re my best friend. Through all the ups and down that every relationship has, we evolve together through them and keep getting stronger.”

Jenner is the cover star of Playboy‘s Fall 2019 "Pleasure" issue, on stands Sept. 17. Scott creative-directed the issue and also modeled along his girlfriend in an eight-page spread of photos.

Since Jenner and Scott first sparked dating rumors at Coachella in April 2017, they’ve had their fair share of "ups and downs." They welcomed their daughter Stormi Webster on Feb. 1, 2018, celebrated each other with unbelievably lavish gifts (remember when he filled her house with roses?), and called each other "hubby" and "wifey" so many times that people started to wonder if they had secretly gotten married. But also, on Feb. 28, 2019, TMZ claimed that Jenner had reportedly accused Scott of cheating. (Elite Daily reached out to Jenner and Scott’s teams regarding initial reports of Jenner’s accusations, but did not hear back.)

Posing in Playboy, however, the couple appears to have put any reported lows behind them.

In the issue, Jenner also mused about how sexuality plays a role in their relationship. “You remind me that motherhood and sexuality can coexist, and just because you embrace your sexuality doesn’t mean you have loose morals or you’re not a good mother,” she told Scott. “You can be sexy and still be a badass mom.”

This isn’t the Kardashian-Jenner family’s first brush with Playboy. Kim Kardashian West posed for the same magazine in December 2007, and the experience was captured in Season One, Episode Four of Keeping Up with the Kardashians. During the photoshoot, Kris Jenner famously uttered the now-iconic line, "You’re doing amazing, sweetie." 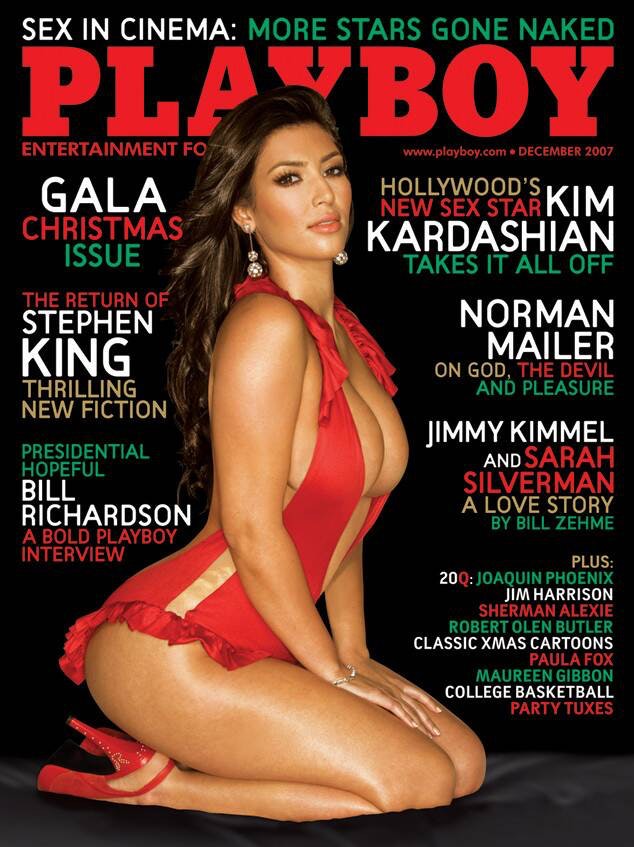 Still, Jenner told Scott during their interview, "I never thought that I would pose for Playboy." She said she changed her mind after she discovered that Scott would creative-direct the issue.

Scott reportedly took his role seriously. Playboy‘s creative director Erica Loewy told People that the rapper put together a mood board for the shoot that “evoked emotions of pleasure, freedom and sensuality, juxtaposed with innocence, an ode to their love, and the beauty of Kylie being captured through her lover’s perspective.”

The magazine’s dreamy spread (cue: Jenner, butt-naked save for a cowboy hat, embracing Scott in a pair of faded jeans under a tree; Jenner slaying a white minidress in a field at sunset) is a beautifully refreshing portrait of a strong, sensual, and, yes, sexy relationship.