Between the abundance of full frontal male nudity (so many penises, so little time) and the recent animated Harry Styles and Louis Tomlinson fan fiction sex scene, Euphoria is never not doing the most. And Louis does not seem here for it.

But let’s rewind a moment because if you haven’t seen Euphoria you’re probably just like EXCUSE ME WHAT?

Basically, a character on the show named Kat creates a “Larry Stylinson” animated fan-fic sex scene, featuring oral sex—and fans proceeded to flip out. Especially considering the IRL conspiracy theory that Harry and Louis are secretly in love, which you can read more about right over this way. 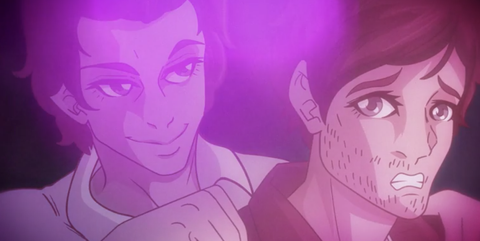 So, how does Louis feel? NOT GREAT. Dude hopped on Twitter and was apparently inspired to reply to this fan’s tweet: “Just going to sit and hope that they for some reason approved it because surely they had to to get it aired. Harry seems quite friendly with the people involved but u can just TELL louis’ not gonna like it.”

His response? “I can categorically say that I was not contacted nor did I approve it.”

I can categorically say that I was not contacted nor did I approve it.

Meanwhile Harry hasn’t commented, but Barbie Ferreira (who plays Kat), told The Hollywood Reporter, “When I first read the script, that was the first thing that popped out to me because I can relate to that as a 22-year-old woman who lived through the One Direction age. It’s such a reality for so many people, and so many children and teens that are fans just have this escapist world.”