When Meghan Markle first met Prince William, she was reportedly “disappointed” that his wife Kate Middleton was not a part of the festivities.

Or at least that’s what “Finding Freedom” authors Omid Scobie and Carolyn Durand wrote about the initial exchange. The royal biography says the then actress was brought to Kensington Palace by her beau Prince Harry in November 2016.

She was introduced to William during an informal tea that was held privately in the palace’s kitchen.

“Meghan was disappointed she didn’t get to meet Kate, who was with the children at Anmer Hall, the couple’s Norfolk estate home near Sandringham,” the book said. “But having gotten along so well with Harry’s brother, she didn’t think much more about that. William had made his feelings known to his brother when he shared how happy he was to see Harry smiling.” 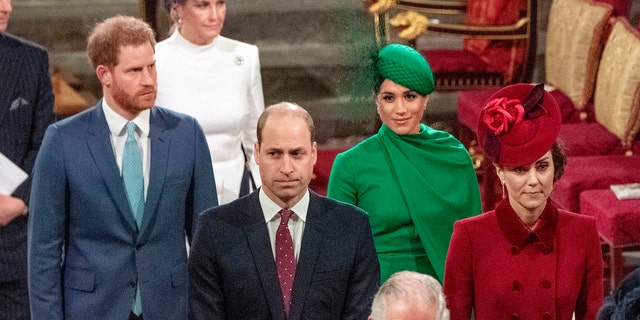 Kate, the Duchess of Cambridge, remained home during this first meeting. Meghan and Harry had only been dating for a few months at the time. The pair met in July 2016 after being set up together on a blind date by a mutual friend.

Scobie and Durand’s book claims that Meghan was nervous about meeting William since he is rumored to be “famously protective” over Harry.

By the time of Meghan and Harry’s engagement in November 2017, Kate had met the future Duchess of Sussex 10 months prior.

“I'd been seeing her for a period of time when I – literally didn't tell anybody at all. And then William was longing to meet her and so was Catherine,” Harry told the BBC during the pair’s first TV interview as an engage couple.

“She's been wonderful,” Meghan added in reference to Kate.

Regarding rumors that position the two duchesses against each other, “Finding Freedom” says that is just not the case here.

“The truth was that Meghan and Kate just didn't know each other that well,” the book reveals simply. It also added that a deeper friendship between the two women was not able to form after Meghan and Harry exited royal life to seek financial independence.