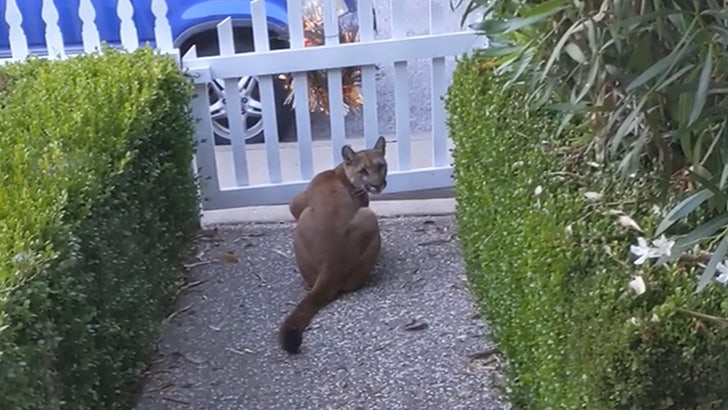 This mountain lion has a San Fran suburb on red alert, because it’s been seen staring down kids at play! Yeah, things are getting hairy.

This big cat made its way into Timothy Kerrisk‘s yard in Pacifica, CA last weekend, and he recorded this video of it sitting by his front gate … seemingly stalking kids who were riding their bikes just across the street.

Kerrisk tells KRON4 he thought it was a dog, like a German Shepherd, at first, but once he realized he was staring at a cougar … he started shouting for the kids to get inside.

As you can see, the commotion made the big kitty decide to split … so it jumped the fence and hid under a nearby truck for a bit. Kerrisk says the puma was still looking like it wanted to pounce though … so he chased it away and over a hill.

Here’s the scary part — Kerrisk says the same mountain lion was going after his cat earlier in the day, then killed a deer behind his neighbor’s house.

Cougar attacks on humans are very rare, but 2 people were killed by them in 2018. So … yikes.