Netflix’s Murder Among the Mormons recounts the twisting document-forging narrative leading up to the three October 1985 Salt Lake City bombings—one which killed document collector Steven Christensen and another, delivered to the home of Gary and Kathleen Sheets and intended for the former, killed the latter on her doorstep. Document dealer Mark Hofmann was the victim of the third bombing, a car bombing, which left Hofmann scarred but alive.

The documentary is an exhaustive work of reconstructive journalism. Filmmakers Jared Hess and Tyler Measom interviewed close to 20 people on camera, including document dealers, collectors, reporters, historians, prosecutors, and examiners. While the documentary digs its heels into the true crime genre, the three episodes also explore dogma within religious communities writ large—and even larger epistemological questions about the nature of truth. Mormonism becomes the vehicle for these discussions, the Church of Jesus Christ Latter-Day Saints (LDS) a unique example of accepted dogma.

“The [Mormon] Church is in a kind of ironic situation,” explains Brent Metclalfe, a rare document researcher. “On the one hand, they are driven by history, and they want to preserve documents. But on the other hand, what do you do with documents that have the potential for destroying someone’s faith.”

Ultimately, Murder Among the Mormons is about faith. Faith not just in the teachings but in the verification of the teachings—the hand of a prophet, the authority of the historian, the insistence of the leaders of the congregation. Mark Hofmann’s forgeries weren’t just illegal and heretical; they fundamentally questioned the structure of knowledge on which all religious institutions are based.

A very basic theory of knowledge might include three conditions. For us to be able to know X, three things have to follow: X is true (in an empirical sense), we believe X, and we are justified in believing X. (We’re not just guessing.) Hofmann’s forgeries show that, for Mormonism (and, arguable, for any religious institution), the only condition for knowledge is belief. If people believe something is true, then it is true (and they can say they “know” it)—regardless of whether it is actually true or whether they are actually justified in this belief.

While this may be well and good for the person who believes through faith alone, the LDS Church wants to say something stronger than their less literal Christian brethren: the truth is in the history. Mark Hofmann thought otherwise, and his obsession to reveal the Church’s hypocrisies lead to his downfall.

Who is Mark Hofmann?

Hofmann was born in Salt Lake City in 1954 and raised in the LDS Church. However, many people interviewed for the documentary believe that Hofmann was, in fact, a long-time atheist, having first questioned the authenticity of the Church’s teachings while on his mission in Manchester, England, as a teenager.

Hofmann enrolled in Utah State University on a pre-med track. He dropped out after his first successful forgery—hieroglyphic characters Joseph Smith allegedly scrawled on a Bible page. The sale of this document helped establish Hofmann in the collecting community. He would then continue—inexplicably—to unearth more and more historical documents, many from the early days of the Mormon Church, for decades to come.

In December 1983, Hofmann showed rare document dealer Shannon Flynn a document allegedly contained in the Golden Plates, the objects from which Joseph Smith claimed to have transcribed the Book of Mormon.

In an interview for the documentary, former Utah news anchor Rob Decker explains the significance of what would later be termed the “White Salamander Letter”:

Former assistant church historian Richard E Turley, Jr. notes in another interview how such an assertion threatened to taint the angelic Christian iconography of the Mormon faith by twisting it into a folk magic. Instead of the angel Moroni guiding Smith to the Golden Plates, the letter claimed, it was in fact an earthly amphibian.

The Church responded by disputing the authenticity of the letter. Collector Steve Christensen then purchased the letter for $40,000, donating it to the Church. Given the document’s implications, he allegedly wrote in a letter to LDS Church President Gordon B. Hinckley, “It appears that dealing in Mormon documents can be a dangerous business.”

Bigger than the Salamander Letter was another historical find, allegedly dating back to the early years of the Mormon Church. The “McLellin Collection,” Hofmann asserted, composed a letter allegedly written by Joseph Smith’s wife, Emma Hale Smith, claiming that it was in fact Smith’s brother who met the angel Moroni and found the Gold Plates. Smith was a fraud.

The collection would prove even more damning than the previous letters. The Church, learning of its potential contents, sought to contain the fallout. Christensen was set to buy the collection off Hofmann and once again turn it over to the Church, this time before the public could read its contents. (The Church, through Hinkley, was reported to have offered $300,000 for the collection.)

However, months passed, and Hofmann still had not produced the papers, despite agreeing to sell them to Christensen.

Christensen was reportedly set to go with Hofmann to a safety deposit box on October 15, 1985 to pick up the McLellin documents. Christensen was also allegedly telling Hofmann what would happen if he wasn’t able to produce the documents—that he would be kicked out of the Church and arrested. “The whole idea was protection of my family,” Hofmann would later say.

Both the Salamander Letter and the McLellin Collection were forgeries. Hofmann had spent years developing techniques for artificial document aging. He had forged hundreds of documents and not just those related to the Mormon Church.

Still, the McLellin Collection was a massive forgery project, and Hofmann wasn’t able to complete the collection in time for his meeting with Christiansen. Police investigators later discovered that Hofmann was in debt. He told police everything he did next was for his family.

Hofmann claims he was unsure who he would try and kill when he first made his pipe bombs. His targets, however, both likely knew Hofmann’s McLellin claims were inaccurate. Hofmann was allegedly set to turn over the McLellin Collection to Christensen the day Christensen was killed. That Hofmann didn’t yet have the collection seems to have motivated the choice of the first killing.

Hofmann put a pipe bomb into a box, addressed it to Christiansen, and walked it into the elevator and up to Christiansen’s office. He then put another boxed bomb on the doorstep of Christiansen’s former employer, Gary Sheets. Hofmann later told police Sheets’ bomb was a diversion—and that it didn’t matter to him which one of the Sheets opened the package.

The third bomb, Hofmann said, was a suicide attempt, though one decided upon only after Sheets and Christensen were killed. The suicide, Hofmann told police, was less about guilt than protection—protection for his family.

The day after the first two bombings, Hofmann had an appointment with an attorney, allegedly representing a LDS Church member. Hofmann was driving his Toyota MR2 with the McLellin Collection in his trunk when the bomb exploded in his vehicle. He survived. 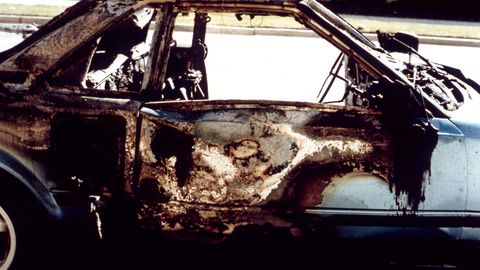 The Oath of a Freeman

One document essential in proving Hofmann’s guilt was the “Oath of a Freeman,” a pledge dating back to 1630, making it the oldest surviving printed document in U.S. history. At the time of the bombings, Hofmann was attempting to sell the document for over $1 million.

Though the FBI had ruled the Salamander Letter as well as the Oath of a Freeman genuine, forensic examiners George Throckmorton and William Flynn brought on to help the investigation after the bombing disagreed with the Bureau’s findings. They soon discovered that the Oath was likely fake.

“And now we found what, to us, was the Holy Grail,” explains Flynn. “The Oath of a Freeman, the one document that Mark Hofmann could use to buy him out of this entire mess he had gotten himself into was now a forgery.”

With the debt and the forgery then came the motive: Hofmann had committed murder to evade detection—Christensen and Sheets perhaps knew of the McLellin forgery, and Hofmann set out to kill both—to protect his business. Throckmorton and Flynn were then able to show Hofmann’s other forgeries.

Hofmann confessed and pleaded guilty in 1987. He was sentenced to five-years-to-life.

Where is Mark Hofmann now?

Hofmann continues to serve out his prison sentence. In 2016, he was moved out of a maximum security to the Utah State Prison in Gunnison. He has reportedly attempted suicide twice.