Naomi Watts has an explanation for why it took so long, relatively speaking, for her to be noticed. 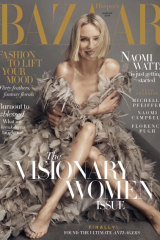 The actress and mother-of-two, who is covering the August issue of Australian Harper's Bazaar , famously got her break, aged 32, when David Lynch cast her in the 2001 film Mulholland Drive.

“Coming from England, we were taught to self-deprecate: ‘No, sorry, I don’t need anything, I’m terrible.’ I literally hovered around Los Angeles trying to get a job and walked in with my head down and not able to own the room for 10 years, which is why I was unhireable, probably. It took a master like David Lynch to go, I see something in there that she has; she just doesn’t know she has it," she tells journalist Rachelle Unreich in the magazine.

It's safe to say that now, Watts has been thoroughly noticed.

The English-born actress (Watts emigrated down under when she was 14), who celebrated her 50th birthday last year, will soon appear in the Game of Thrones prequel series, working title Bloodmoon. There's also Ophelia, a retelling of Shakespeare’s Hamlet from Ophelia’s perspective, The Loudest Voice, a miniseries based on the downfall of the late Fox News CEO Roger Ailes, and Penguin Bloom, which tells the real-life story of Sam Bloom, who became a paraplegic after an accident while on holidays.

Watts has also become a partner in clean beauty company Onda, which was founded by two of her friends, Sarah Bryden-Brown and Larissa Thomson, in 2016. The brand just opened its fourth site, in London. There are two in the US and one in Sydney's Paddington.

Like many women of a certain age, Watts has a lot on her plate.

After her split with Liev Schreiber, her partner of more than a decade and the father of her two sons, more than two years ago, she says her family has found balance.

“Liev and I always knew we had to put the kids first and that, no matter what, we would respect each other and take care of each other in the best way going forward for the benefit of our children. And we’ve kept things in a great space. We’re easy with each other and we want the best for each other  Our friendship is better now than it ever was. And I feel like my kids are in a good place.”

That's not to say everything is always easy.

She tells the magazine she still struggles with confidence. 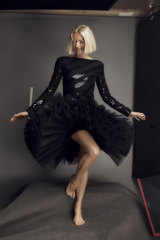 “I’m not one hundred per cent comfortable in my skin. I grapple with it like anybody else does. But I definitely feel that as I’ve gotten older, I’ve figured out [what works].

It doesn’t mean to say, even with lots of practice, that I’ll go, Oh yeah,
I’ve got this! I can throw my fists in the air! I’ll feel like I’ve got a handle on things and then the next day be like, Arghh! I can’t cope! I’ve got too much going on and I’m stretched too thin! If you don’t feel like you’re managing things well at all, that makes you feel uncomfortable in your skin. It’s all linked up, good days and bad.”

It's this mix of determination and humility that Eugenie Kelly, editor-in-chief of Harper's Bazaar, says makes Watts the perfect woman to cover the magazine's "Visionary Women" issue.

"She’s always had the guts and flair to do things her own way – she’s the ultimate quiet achiever. And now she’s adding beauty businesswoman to an already impressive CV. Her relatively late rise to the top is evidence she’s no stranger to overcoming challenges," she says.

The August issue of Harper's Bazaar is on sale Monday July 1.