Dustin Johnson and his USA teammates won the 2021 Ryder Cup on Sept. 26, and the pro golfer’s fiancee, Paulina Gretzky, was by his side for some PDA to celebrate the victory.

Paulina Gretzky is her fiance, Dustin Jonhson’s, biggest fan, and she helped him celebrate his win at the 2021 Ryder Cup, which was rescheduled from 2020, on Sept. 26. After Dustin and his teammates secured their victory, Paulina ran onto the course to congratulate her man. Paulina looked incredible in tight white pants, as well as a team USA shirt with JOHNSON written across the back. She kissed Dustin and jumped into his arms during the celebratory moment. 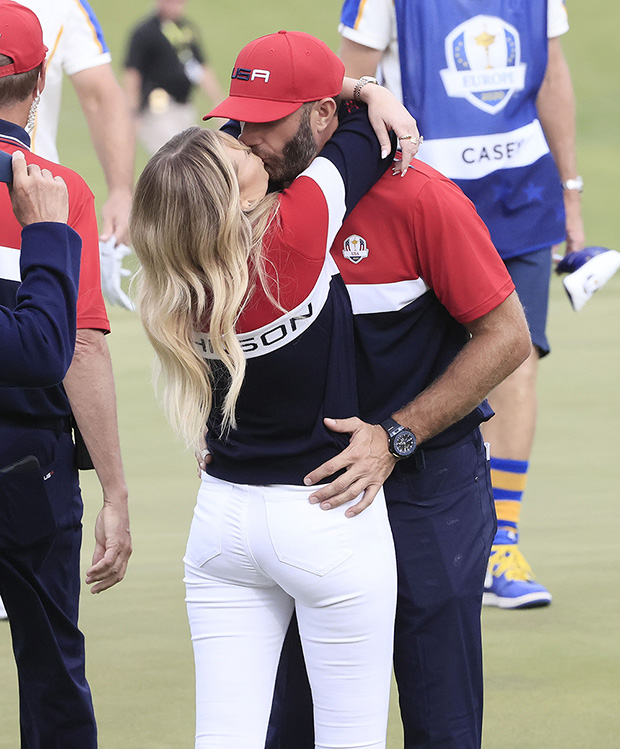 Dustin is certainly never one to shy away from a good celebration. In addition to some special moments with his lady, he also excitedly popped a bottle of champagne to commemorate his team’s victory. Although Dustin was the oldest guy on the team, he had a great weekend on the course to help lead USA to the win over Europe. Other players on team USA included Brooks Koepka and Jordan Spieth, amongst others. 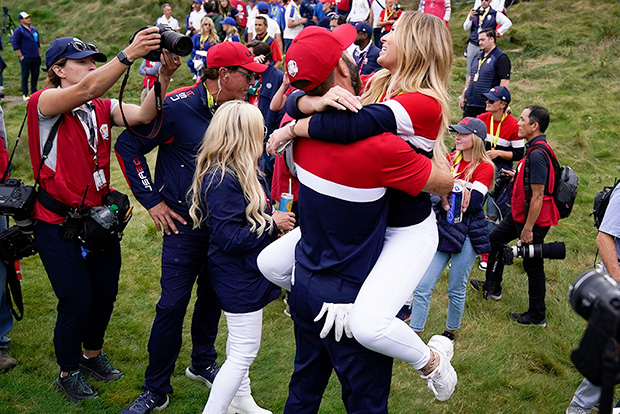 While this was certainly an exciting moment in Dustin’s professional career, he and Paulina also have a big personal event coming up, as well — their wedding! The two have been engaged since 2013, but finally set a wedding date earlier this year. Although they’ve kept tight lipped about the location and date, Paulina previously confirmed that she has her Vera Wang wedding dress picked out, so the nuptials could happen at any time!

Paulina and Dustin are parents to two sons, Tatum, 6, and River, 4. Earlier this year, Paulina explained why the two decided to wait so long between getting engaged and tying the knot. “I fell in love with someone so fast and we had the best thing that ever happened to us happen so quickly,” she explained. “The most important thing was my kids, Dustin and my career. Those things took precedent. Those things had to be established. So after [Dustin] won the Masters [in 2020], I said, ‘Let’s do it, this makes sense.’”