Prince Harry and Meghan Markle have been photographed in New York – their first sighting since the release of their divisive Netflix trailers.

The couple have made headlines across the world with their controversial claims in their upcoming docuseries – but appeared carefree after landing in the Big Apple for the Ripple of Hope Awards.

The snapshots – obtained by Page Six – show the couple stepping off their private jet before making their way to a car, with Harry dressed in an unbuttoned white shirt, suit trousers and carrying a jacket. He also has a bag over his shoulder.

Meghan, meanwhile, is dressed all in black, opting for a long-sleeved, fitted dress and oversized dark sunglasses, with her hair pulled back in a bun. She is also carrying an overcoat in her arms. 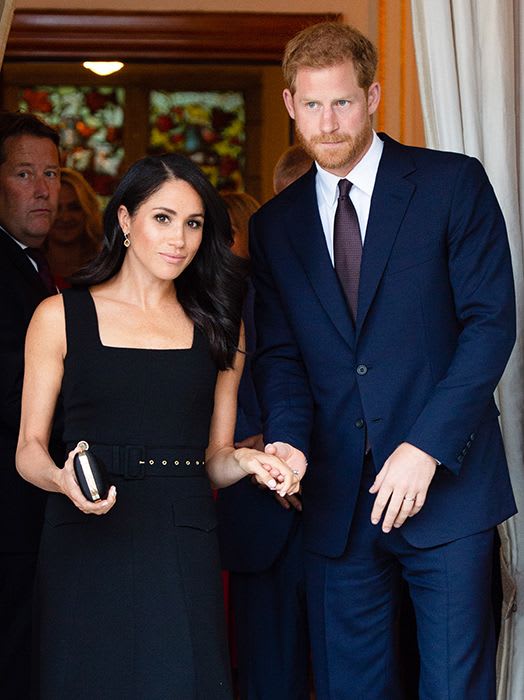 Harry and Meghan flew into New York on a private jet

Harry and Meghan are in New York to receive the Robert F. Kennedy Human Rights Award on Tuesday in honour of their “heroic” stance against racism within the royal family.

The foundation is named after former President Kennedy’s younger brother, who was assassinated in 1968 during his presidential campaign.

The couple are set to receive the Robert F. Kennedy Human Rights Award

Reflecting on Harry and Meghan’s award, President of Robert F. Kennedy Human Rights, Kerry Kennedy, said: “They went to the oldest institution in UK history and told them what they were doing wrong, that they couldn’t have structural racism within the institution; that they could not maintain a misunderstanding about mental health.”

She continued: “They knew that if they did this there would be consequences, that they would be ostracized, they would lose their family, their position within this structure, and that people would blame them for it… They have done it anyway because they believed they couldn’t live with themselves if they didn’t question this authority.”

The decision to award the prestigious accolade to the Sussexes has nonetheless been met with widespread criticism.

The decision has been met with widespread criticism

Calling into question Meghan and Harry’s philanthropic work, Professor David Nasaw, author of The Patriarch, told The Independent: “If you look at the people who have been awarded the Robert Kennedy prize in the past-Bill and Hillary Clinton, Nancy Pelosi, Bishop Desmond Tutu-and then you have to ask what are Harry and Meghan doing here?

“What in God’s name have they done to merit this? What percentage of Harry and Meghan’s wealth is going to worthy causes?”

Elsewhere, royal expert Angela Levin raised doubts over the couple’s claims of racism, arguing that such accusations have yet to be scrutinised. Speaking to Sky News, she said: “This award for heroism is for absolutely nothing… it’s for their Oprah Winfrey interview which doesn’t have any proof. There were over 30 lies in that interview.

Make sure you never miss a ROYAL story! Sign up to The Royal Explainer newsletter to receive your weekly dose of royal features and other exclusive content straight to your inbox.