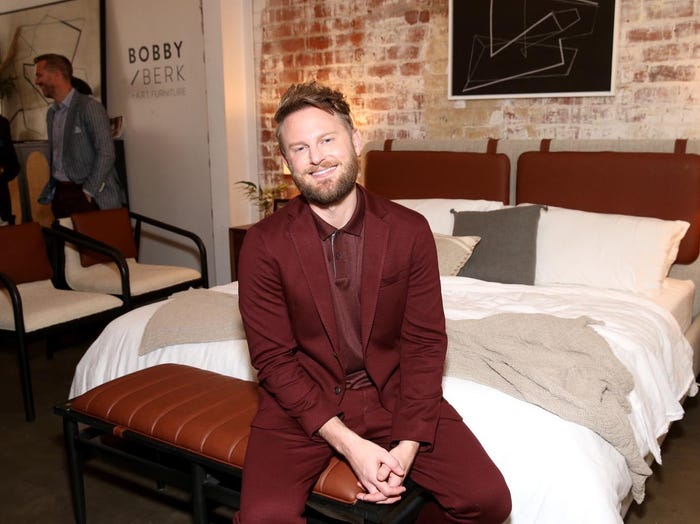 Bobby Berk really, really wants you to make your bed and find good lighting when you're working from home.

"If you are going to put your home on display, at least tidy up," Berk said.

While promoting his partnership with PayPal's "Pay In 4" initiative, Berk, best known for being the interior design expert on Netflix's "Queer Eye," shared some of his best advice for how to make the most out of your remote work situation.

If your bedroom appears in the background of virtual meetings, Berk says you should make sure it's not a mess

"I personally feel that having a virtual background [for meetings] is fine," Berk told Insider. Berk has a few different WFH backgrounds available for download on his website, including his home office which is featured in the video below.

But if you decide against using a virtual background, Berk highly recommends cleaning up what's in your actual background. In fact, he says it's one of the biggest mistakes he's seen people make in their work from home setups.

"The amount of time I've been on a call with people and their bed is just a disaster, and there are dishes on the nightstand and their closet door is opened and everything is hanging out," Berk told Insider. "I'm like 'At least close the door and make the bed.'"

"Just make your bed," he added.

While tidying up is a universal must before hopping on a video meeting, how a person decorates their space is a personal decision. Berk said that no one should be judgmental about the decor they see on the other end of a Zoom call.

Find good lighting, whether it's a ring light or a desk lamp

At a time when almost all meetings are conducted remotely over Zoom or a similar platform, Berk says finding flattering light is key.

"Low lighting makes you look bad. It casts shadows and gives you dark circles where you don't actually have dark circles," he told Insider.

"Nice, even light is going to make you look like you've got on a beautiful foundation covering all your flaws, and make your face look much more even," Berk added.

Berk says a great remedy for this is getting a ring light, a bright, circular LED device that dispels unflattering shadows. Smaller ones that hook up to your phone are relatively inexpensive, while bigger, professional-grade ring lights on a tripod can set you back over $100.

If you don't want to splurge on a pricey ring light, the right desk lamp can be a good, cost-effective source of flattering lighting too, according to Berk.

He recommends getting a lamp with a fabric shade that "evenly disperses the light" over a lamp with a naked bulb and harsh light.

A power strip is an easy way to keep the area around your work station organized, according to Berk

"Another thing that I noticed when I first started working from home more is all the cords used to drive me nuts," Berk told Insider.

He added that an easy and inexpensive solution is to connect everything via a power strip with both plugs and USB ports.

"That way all my chords can stay to one side and I don't have to worry about tripping over anything and strangling my devices with their own chords," Berk said.

Berk says noise-canceling headphones are good for concentration and an effective way to avoid fights, especially if you're sharing your space with others.

"Even if you live with a significant other or with roommates or kids, you need to be able to block the rest of the world out [during work]," he told Insider.

He also adds a good, comfortable chair to the list of remote workspace must-haves.

Berk has appeared on "Queer Eye" since it debuted in 2017, but he's been a home decor expert for far longer than that

Berk worked his way up at notable home goods retailers like Bed Bath & Beyond and Restoration Hardware before founding his own home decor brand, "Bobby Berk Home," in 2006.