This evening, Grant will add to his already-stellar resume as he continues his role as Harry on Channel 4’s crime drama Suspect. The show follows detective Danny Frater, played by James Nesbitt, retracing his daughter’s final days before her murder to discover what happened.

Grant, 65, had a stellar year shortly before the pandemic which rocketed his celebrity status.

From the end of 2018, the Swaziland-born actor and presenter found himself receiving a flurry of award nominations for his role in Can You Ever Forgive Me, including nominations for a Golden Globe and Academy Award.

However, the upturn in his career would soon be overshadowed by heartache as Grant shared the news on social media in September 2021 that his beloved wife, Joan Washington, who had been diagnosed with stage four lung cancer earlier that year, had succumbed to the illness.

He posted a loving video of him and Washington dancing to the song ‘Only You’ on Twitter.

The video was captioned: “ONLY YOU! Joan – Love of my Life & Giver of Life to our daughter Olivia. 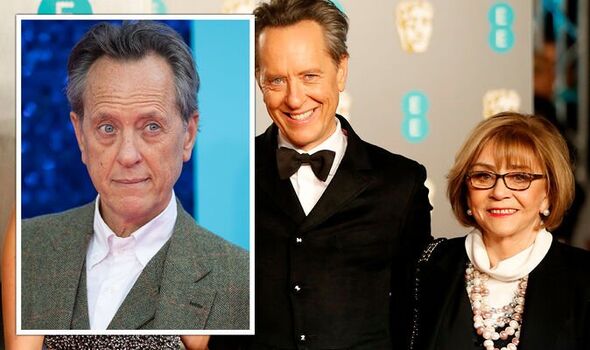 “Our hearts are broken with the loss of your Life last night. 35 years married & 38 together.

“To be truly known and seen by you, is your immeasurable gift. Do not forget us, sweet Monkee-mine.”

The pair had been married for 35 years, and together for 38, when Washington passed at the age of 71.

Support poured in for the heartbroken Grant from fellow actors like Octavia Spencer as well as thousands of condolences and messages from his fans.

The pair had originally met at the Actors Centre in London, where Washington was teaching.

She was trained at the Central School of Speech and Drama and became a voice and dialect coach for the film industry.

Although not necessarily in front of the camera like her beloved other half, Washington worked alongside big names, including the likes of Anne Hathaway to Barbra Streisand.

In a joint interview with the Independent and the Guardian in 2011, Grant recalled how it was love at first sight in December of 1982.

He said: “She was wearing a boiler suit and had fairly short, cropped hair and Kicker shoes, and was chain-smoking, which I thought was insane.

“I thought she had the most wonderful voice and huge, sort of monkey eyes. She seemed fairly frenetic. I thought that she was really cute.”

In April this year, Grant took to Instagram to share how he was adjusting to life without Washington.

He filmed himself walking along a sunny beach and recalled some great advice she had left him.

He said: “Joan so wisely asked me to find a pocketful of happiness in each day.”

With a short chuckle he added: “Trying my best.”

The post caption read: “Beautiful as this beach is, I feel and look like an old turtle without my shell, trying to navigate the world on my own, having lost my loving ‘compass’ called Joan.”

He contemplated his aloneness now, saying: “It feels like a whole new world, navigating solo after 38 years.”

While together the couple had a daughter, Olivia Grant, now aged 33, who has followed in her mum’s footsteps and gone into the film industry behind the camera.

The next episode of Suspect airs tonight at 9pm on Channel 4.