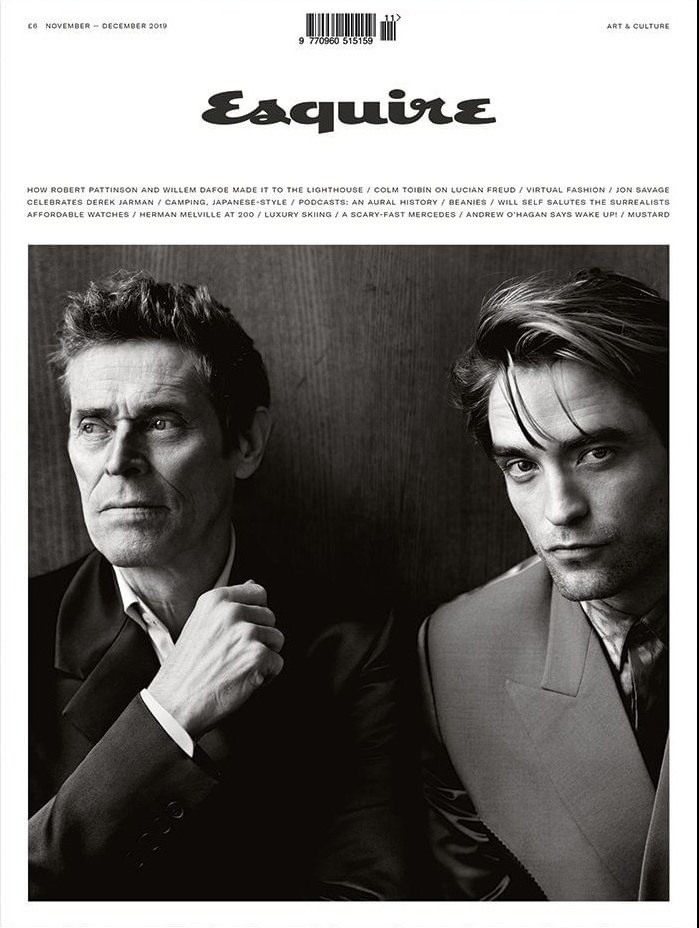 Robert Pattinson and Willem Defoe could conceivably be Oscar contenders for their weird little movie, The Lighthouse. They play 19th century lighthouse keepers who go completely bonkers in their isolation. Variety reported recently that the studio is going to put money behind Rob as lead actor and Willem as supporting actor for the awards season. They also cover the November issue of Esquire UK. I was expecting a joint interview with lots of give and take, but it’s not – they were interviewed separately, on different continents. Willem comes across as the well-adjusted artist who knows what he’s doing. Rob comes across as a bit neurotic and weird and try-hard, but charming. You can read the full piece here. Some of the highlights… just with Rob’s quotes.

Rob on playing someone bonkers: “Because you’re playing a mad person, it means you can sort of be mad the whole time. Well, not the whole time, but for like an hour before the scene. You can literally just be sitting on the floor growling and licking up puddles of mud.” This sounds figurative. He really means it. On The Lighthouse, in the scenes in which his character is meant to be drunk on kerosene (there are quite a few of them), he was “basically unconscious the whole time. It was crazy. I spent so much time making myself throw up. Pissing my pants. It’s the most revolting thing. I don’t know, maybe it’s really annoying.”

One scene in particular: “There’s a scene where Willem’s kind of sleeping on me and we’re really, really drunk and I felt like we’re completely lost in the scene and I’m sitting there trying to make myself gag and Robert [Eggers] told me off because Willem’s looking at him going: ‘If he throws up on me, I’m leaving the set.’ I had absolutely no idea this whole drama was unfolding.”

Getting cast as Batman: “It’s kind of insane. I was so far away from ever thinking it was a realistic prospect. I literally do not understand how I’ve got it, at all.”

The reaction in Cannes to The Lighthouse: “I thought it was serious, and dark, and kind of sad. I was quite shocked by [people laughing].”

He licked puddles, tried to make himself throw up for real and truly pissed himself? Esquire UK notes Lawrence Olivier’s remark to Dustin Hoffman to “just try acting,” and it seems very appropriate here. It’s not that Rob’s method is so intense, I think he just doesn’t know how else to do it. He thinks it would be a cop-out to just pretend to be drunk or pretend to be bonkers. He thinks that would be inauthentic. Anyway… it will all be worth it if he gets an Oscar nomination!

Sundays are for the pub, warm knits and reading our cover interview with #RobertPattinson and #WillemDafoe. Available via the link in bio 📖 Photo: @alasdairmclellan Fashion: @elliegracecumming Wearing: @dior and @stepheneinhorn