Ryan Reynolds revealed how he wooed his longtime wife Blake Lively in a new interview — and called their relationship trajectory a ‘fairytale.’

Ryan Reynolds opened up about how he pursued longtime wife Blake Lively. The actor, 44, recalled his first encounter with the actress, 33, while on set of the 2011 film Green Lantern and later, the train ride that changed their relationship while on Jason Bateman, Sean Hayes, and Will Arnett’s podcast SmartLess on Monday, July 19. The actor was quite forthright, as he revealed he kept “begging” Blake to sleep with him.

“I met Blake on the darkest crease in the anus of the universe called Green Lantern,” he recalled. “We were friends and buddies and about a year and a half later we went on a double date, but we were with dating separate people.” The two “hung out” and “always kind of kept in touch but casually,” but a train ride to Boston in which he made the first move changed their trajectory.

“Next thing you know, she was going to Boston, I was going to Boston and I said, ‘Well, I’ll ride with you,’” Ryan said. “We got on the train and we rode together. I was just begging her to sleep with me.” When asked about how quickly they went from dating to a more serious relationship, Ryan said the progression was “like out of a fairytale.” 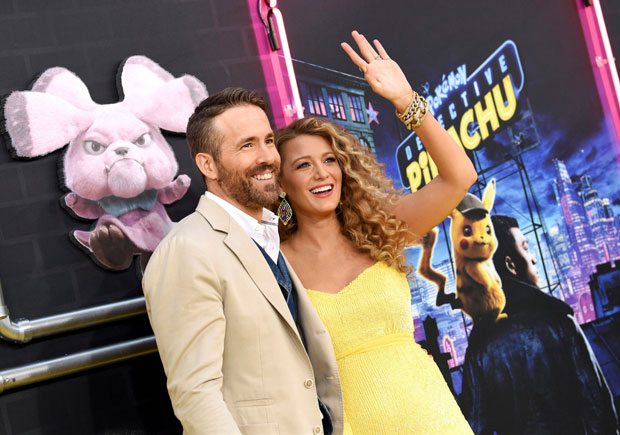 “A week later I was like, ‘We should buy a house together,’” he said. “And we did.” The couple tied the knot in September 2012 at a former plantation in South Carolina. The actor recently issued an apology for getting married at a venue that historians and activists say glorify slavery amid the racial reckoning last year. “It’s something we’ll always be deeply and unreservedly sorry for,” he told Fast Company last August. “It’s impossible to reconcile.”

The longtime couple share three daughters, Inez, 4, James, 6, and Betty, 1, together. In an interview with Marie Claire in June 2016, Blake opened up about being “protective” of her family. “All my eggs are in one basket, and that’s my family,” she told the outlet. “That’s where my heart is. That’s the thing that I feel most protective of and the thing that I feel is the most exposed when I feel exploited.”