After months of dating rumors, Kourtney Kardashian’s ex is finally IG official with his new boo. Of course, if you’ve been following Scott Disick and Amelia Gray Hamlin’s relationship timeline from the beginning, then this news shouldn’t come as a surprise. Ever since they first sparked dating rumors over Halloween weekend, the two have been dropping little hints about their romance all over social media, and on Valentine’s Day 2021, they confirmed those rumors once and for all. And while I’m not shocked by the pair, I am surprised Disick decided to settle down with someone new so soon.

Following his August 2020 breakup with his girlfriend of three years, Sofia Richie, Disick was romantically linked to several different ladies before getting together with Hamlin. In early October, Disick was reportedly spotted with model Bella Banos at Nobu in Malibu, per Us Weekly. A few weeks later, he reportedly grabbed dinner with model Megan Blake Irwin, according to the Daily Mail. Some fans thought he might even reconcile with Kardashian following his split with Richie, but it seems he has a new woman in his life now. Here’s everything I know about Disick’s low-key romance with Lisa Rinna and Harry Hamlin’s youngest daughter.

They Sparked Dating Rumors On Oct. 31

Disick and Hamlin were first linked after they reportedly arrived at Kendall Jenner’s Halloween party in the same car, per Us Weekly. Weirdly enough, Disick posted a pic of him and Kardashian on a beach just days earlier (or, at least, I think it’s Kardashian). "Working on my night moves," he captioned the pic.

They Reportedly Got Dinner Together On Nov. 7

A week after their reported Halloween date, Disick and Hamlin posted matching IG Stories from Tre Lune restaurant in Montecito, California. Disick even captured his photo, "My love," but it’s unclear whether he was referring to his pasta or his date. The two were reportedly joined by Disick’s long-time friend and Hamlin’s stylist, Marie Lou Bartoli.

"Scott and Amelia hanging out is nothing serious at the moment," a source for Us Weekly reportedly claimed at the time. "He’s dating around and having fun." According to the source, Disick and Hamlin were introduced by Bartoli and "hit it off right away."

They Reportedly Got Cozy At The Beach On Nov. 16

On Nov. 16, TMZ published photos that seemingly showed Disick and Hamlin strolling on a beach together in Santa Barbara. Hamlin later posted pics from the outing on IG, though Disick wasn’t included in any of the snaps.

They Seemingly Had Another Dinner Date On Nov. 21 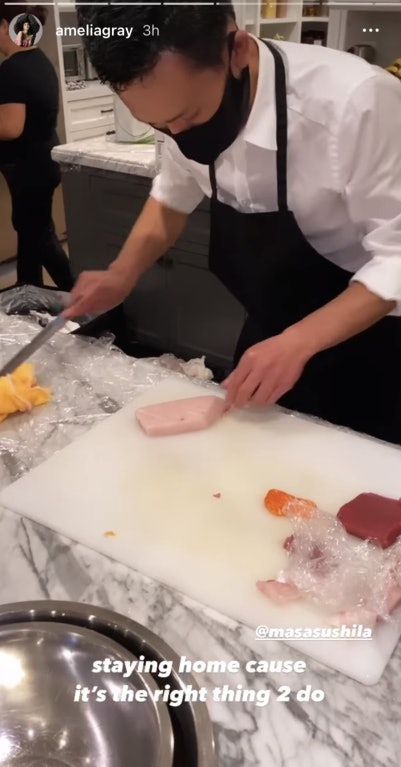 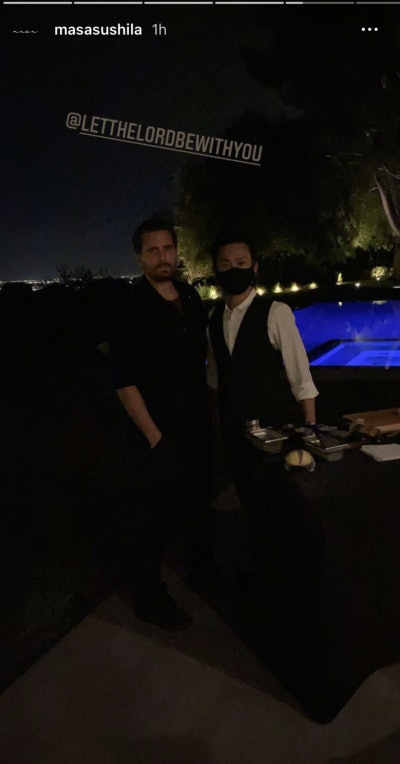 The rumored couple seemingly enjoyed a homemade sushi dinner together on Nov. 21, according to Hamlin’s IG Stories. "Staying home ’cause it’s the right thing to do," Hamlin captioned an Instagram Story video showing a sushi chef working in her kitchen. A few hours later, the private chef company posted a photo of one of their chefs posing with Disick on their own IG Stories. Bartoli also shared a snapshot from the dinner.

That same day, a source for The Sun reportedly claimed Hamlin’s mom Rinna is "worried" about her daughter dating Disick, who’s 18 years her senior. "Lisa isn’t going to acknowledge this publicly for now because she’s still trying to wrap her head around it and thinks this is a phase," the source reportedly claimed. "But when she does speak about it, she’ll keep her cool, but really, she’s worried. That’s her youngest kid."

They Seemingly Spent Thanksgiving Together On Nov. 26 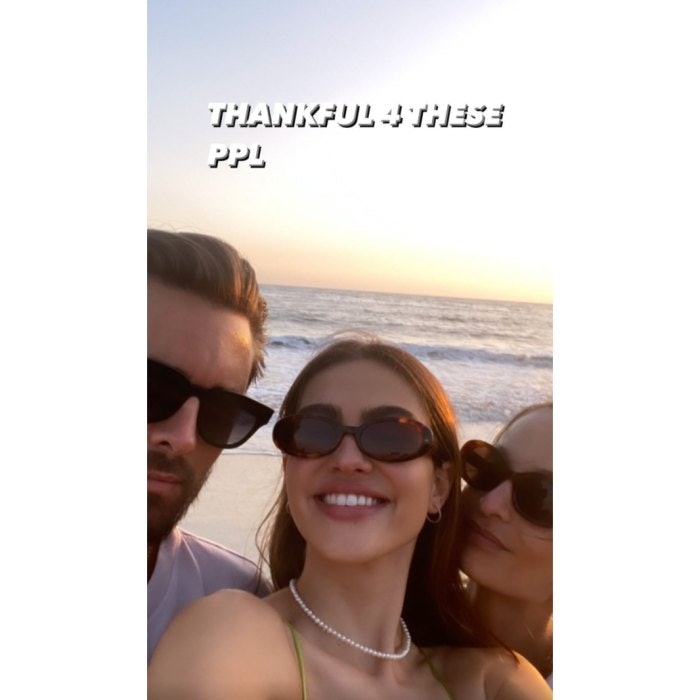 On Thanksgiving, Hamlin seemingly made their (maybe) relationship official when she posted a selfie featuring herself, Disick, and a friend to her Instagram Stories. "Thankful 4 these PPL," she captioned the post. 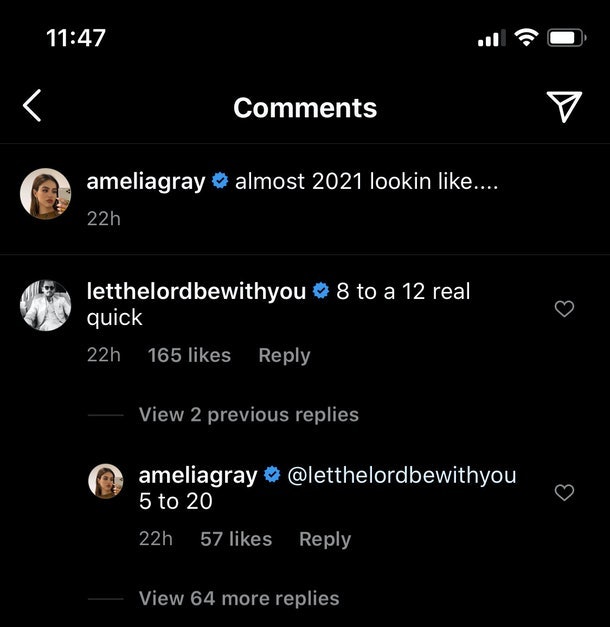 Dating rumors ramped up after Disick and Hamlin had a flirty Instagram exchange on December 16. After Hamlin posted a selfie, which she captioned "almost 2021 lookin like…" Disick slid into her comments to write, "8 to a 12 real quick," to which Hamlin replied, "5 to 20."

https://www.instagram.com/p/CJCkOlvBWWT” data-shortcode=”CJCkOlvBWWT” data-instgrm-captioned>A few days later, Hamlin seemingly defended her relationship with Disick in a Dec. 19 IG Story. "Ppl r extra weird and judgmental these days…" she captioned a selfie. "People can embrace themselves however they feel fit for them at that moment in time. People grow. People learn to love themselves more and more." 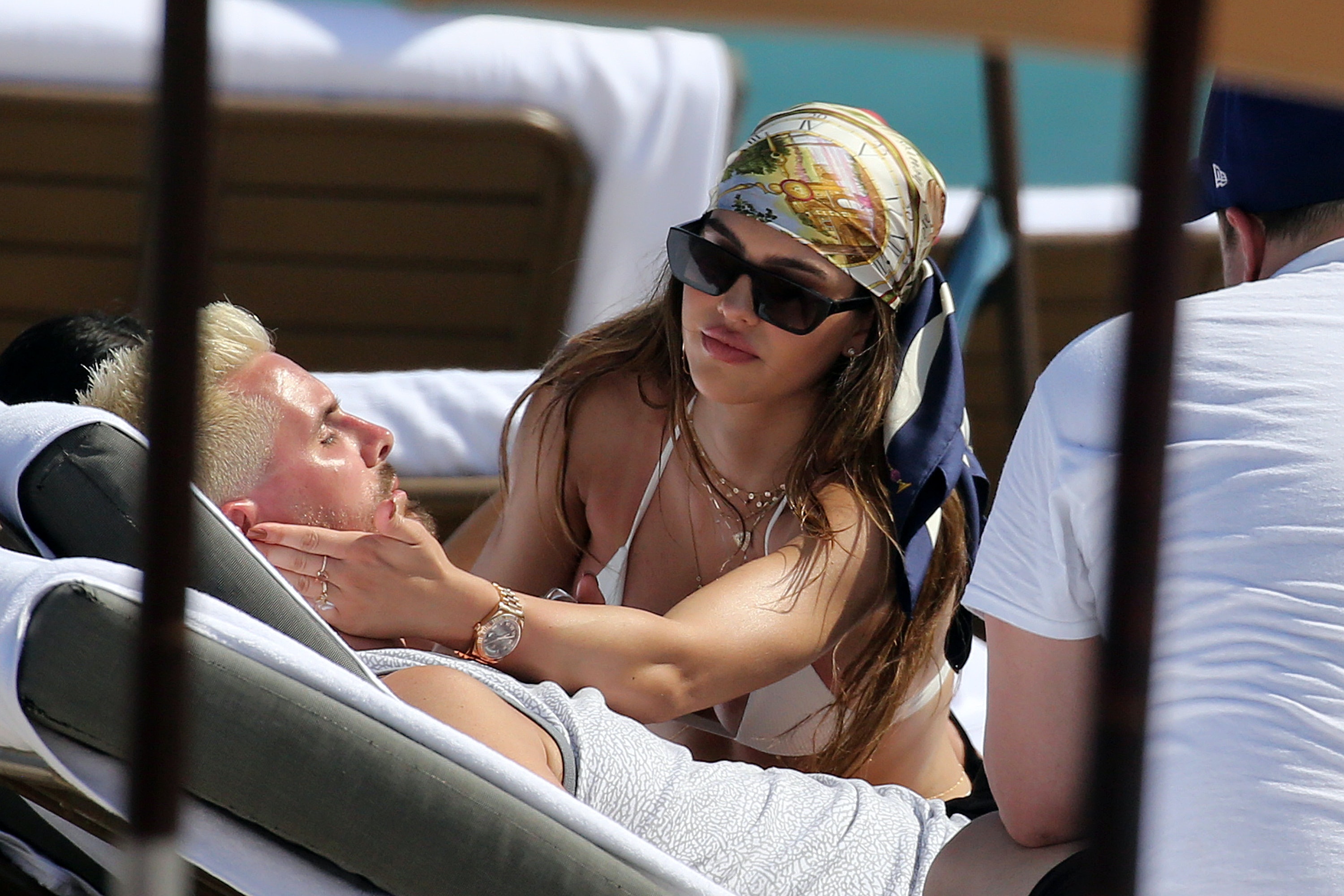 According to Entertainment Tonight, Disick and Hamlin rang in the new year in Mexico along with friends. "Going to Mexico was a nice way for the both of them to unwind, relax, and spend more time with each other," a source for ET reportedly claimed. "Amelia is easygoing and gets along with Scott’s friends, so they’re able to just kick back and have a good time."

Around the same time, a source for Us Weekly reportedly claimed the Kardashians approved of the budding romance. "The Kardashian-Jenner family is super supportive of Scott and Amelia’s relationship," the source reportedly claimed. "They really like the two of them together and think Amelia is a great influence on Scott. Scott and Amelia are in a really good place. They have a lot of love and respect for each other and it shows."

They Confirmed Their Relationship On Feb. 14

For their first Valentine’s Day as a couple, Disick and Hamlin took a trip to Miami to celebrate. A source for E! News reportedly claimed the duo "looked very much in love" as they relaxed on the beach.

Then, after months of dating rumors, Disick and Hamlin finally became Instagram official. On Feb. 14, Disick shared two photos of himself and Hamlin at dinner to his IG Stories. Earlier that same day, Hamlin shared a photo of Disick from behind in her own IG Stories while they took a boat ride together. She also shared a photo of a giant bouquet of red roses and a spread of food, suggesting that the pair had enjoyed a romantic meal aboard the boat. Cute!

Here’s hoping it’s only a matter of time before Disick and Hamlin go on a double date with Kardashian and her new BF, Travis Barker.