Sex/Life star Sarah Shahi is finally weighing in on one of the BIGGEST scenes put on Netflix ever!

The 41-year-old actress opened up in a new Instagram video published on her page on Friday, revealing in an interview whether real-life boyfriend Adam Demos is actually packin’ as much heat down there as he appears to be on the super-sexy sudden-sensation streaming show!

As you’ll recall, we’ve covered Demos’ big d**k energy quite a few times at this point, pontificating on whether his massive member is really real or just a prosthetic. Heck, fans even went so far as to wonder whether Shahi could’ve had a “grass is greener” moment regarding Demos’ d**k, considering her marriage of 11 years ended right around the time the hit Netflix show started filming — and the two started dating IRL. Hmmm…

We don’t know about all that, but what we do know is that it’s good business to play things coy sometimes! That was Sarah’s take on the matter when she got straight-up asked about the Aussie actor’s situation down under in this new clip. 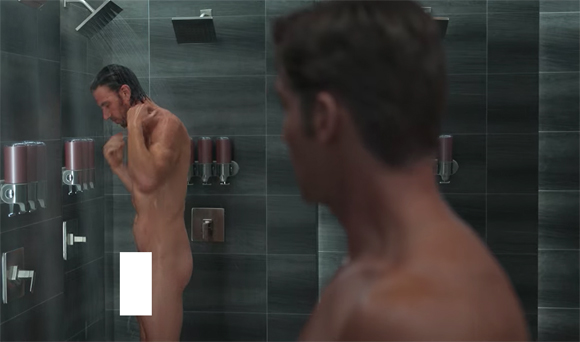 Speaking like a true saleswoman trying to get a bigger viewership on the sultry streaming hit, the Sex/Life star remained mum on the topic of Adam’s endowment! She did offer a wicked smile and a laugh, though, while saying (below):

“It’s not my place to tell. A woman never kisses and tells, and neither does a gentleman, so…”

Give us the goods already, girl! Or better yet, let us in on whether you’re getting the goods, as it were.

You can ch-ch-check out Shahi’s full interview clip and her coy c**k talk down in the IG post (below):

Clearly, all the women in the Sex/Life realm are both playing up a hot topic here and respecting Adam’s wishes for secrecy.

Not long ago, series creator Stacy Rukeyser was questioned about this very same topic in a Collider interview, too. Not wishing to divulge too much, Rukeyser confirmed it is very much Demos and not a body double, but then added (below):

“That’s not a body double, no. I mean, people usually ask is it real or is it a prosthetic? I can tell you what Adam Demos says about it which is, a gentleman never tells. So, we are leaving that up to the viewer’s imagination.”

Awww… but we don’t want it left up to our imagination! We just want to KNOW!

Thankfully some women do kiss and tell! If you can trust their anonymous contributions to the conversation! Australian radio host Em Rusciano asked her listeners for insider info, and a couple ladies obliged. One wrote to her:

“Hey Em, I grew up in the same town as Adam Demos (a year below me at school) and I can guarantee you there were no special effects. He is a big boy!”

“My family grew up in Dapto with Adam Demos. My sister asked his bestie if it was his penis and it is.”

Well, they seem to be telling without the kissing — but either way, they’re getting the word out.

What do U think, Perezcious readers?? Real or not?! Huge swingin’ d**k, or powerful (but phony) prosthetic??

Sound off about it with your take on the matter down in the comments (below)!!!