At a time when Hollywood is grasping to reboot and remake everything, it's refreshing when celebrities don't seem all that interested in looking back.

This week, Top Gun star Kelly McGillis, who played civilian contractor and Tom Cruise's love interest Charlie in the original 1986 film, stirred headlines after explaining why she won't be part of the upcoming sequel. 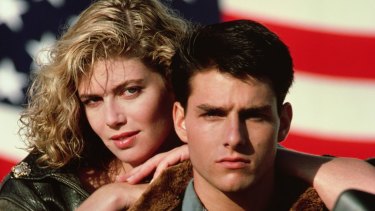 "I'm old, I'm fat and I look age appropriate for what my age is, and that is not what that whole scene is about," the 62-year-old told Entertainment Tonight.

Not that she's miffed about being shunned. Asked whether she'd be catching the anticipated flick in cinemas, she replied: "I'm not racing to the theatre, and I'm not racing away from the theatre … It's just not on my little list of things that I would like to get done."

On a local bent, actor David Wenham, 53, had a similar, if more gracious, explanation as to why you won't see him making middle-aged types swoon as the charming Diver Dan in the new SeaChange reboot.

Firstly, he wasn't even approached to be involved in the series, at least "not prior to when they began", he told me recently. But again, he couldn't care. 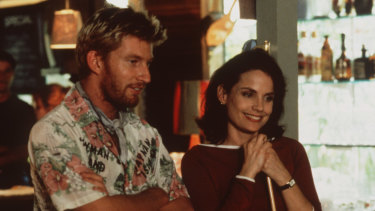 David Wenham, with Sigrid Thornton, in SeaChange in 1998.Credit:ABC

"There were three seasons of SeaChange; I was in the very first one. I treasured my time in that series; it was one of the happiest times in my creative life. But I was satisfied with what the character did back then, so …," he trailed off.

While these cases may have the wry whiff of sour grapes – it's easy, after all, to say you wouldn't reprise a role you weren't actually asked to – there have been other recent examples of stars casually eschewing their most well-known cash cows from the get-go.

Before his passing, Luke Perry was among the few hold-outs on an upcoming 90210 reboot that will see the '90s soap's original cast members playing "heightened" versions of themselves. And the decision by former kid-stars Mary-Kate and Ashley Olsen not to feature on Netflix's Fuller House was turned into an embarrassing running gag on the show, which routinely broke the fourth wall to plead for Michelle's return.

Personally, I salute these stars' indifference. What's the joy in looking back? Where's the challenge, or personal reward, in retracing your steps to appease nostalgic fans? Is David Wenham not worth more to you than Diver Dan? Let him live, people.

Not that I'm dismissing actors chasing a pay cheque or a rare gig, or simply revisiting their own iconic work because there's another unique chapter to tell (the wonderful new season of Veronica Mars, like 2017's Twin Peaks: The Return, may be a prime argument in favour of reboots).

But when a rear-view has become the industry's default perspective, it's inspiring to see stars more interested in looking ahead instead.