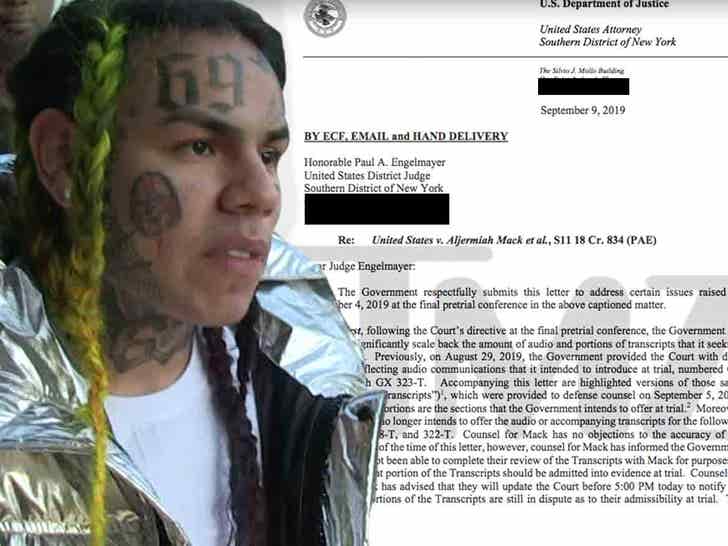 Prosecutors have just played their hand in the Tekashi 6ix9ine snitching case … laying out precisely how the rapper will turn on his former gang cohorts when their trial begins next week, and the details are pretty shocking.

The U.S. Attorney in Manhattan sent a letter to the judge in the case, outlining their strategy, which includes key testimony from the rapper who’s behind bars after striking a plea deal … and the key to unlock his cell is snitching on his partners in crime.

According to prosecutors, Tekashi is expected to testify and name names in various alleged crimes, including the July 2018 robbery and kidnapping of Tekashi himself.

The big thing … he will identify which Nine Trey Blood members are attached to various aliases used in incriminating texts, social media posts, DMs, and other communications. This is critical evidence for prosecutors, since they have to prove the messages were sent by the various defendants.

According to the letter, Tekashi will implicate himself and other gang members in a conspiracy to harm a rapper — Casanova — who wrote lyrics they felt were critical of 6ix9ine.

He will also testify … another member of Nine Trey — SEQO — sent out a message if any rival bloods were to come across Tekashi they were to “fire on him.”

What’s also interesting … the letter essentially says Tekashi was the bank for the gang … one of his roles was to make money for the gang and then distribute it among members. Our sources say lots of friction was created when Tekashi turned off the cash spigot. Our sources say that’s why the kidnapping/robbery went down … as retaliation.

As we reported, Tekashi faced a minimum of 47 years in prison, but he could now get out in a matter of years in return for his full cooperation. It’s all but certain he would become a member of the witness protection program, but that may be problematic given his distinctive tattoos.