Doorbell cameras (also known as video doorbells) have become a popular home security gadget over the past few years, and it’s easy to understand why. Your front door is one of the most accessible points of entry for a burglar: it’s large, easy to stake out, and leads directly into several parts of your home.

In 2017, a news station interviewed 86 convicted burglars about how they broke into houses. Many said they broke down the front door, and one of the first things they did was check for a camera. It didn’t deter all of them, but some thought twice if it was clearly visible.

Having a security camera that’s always on and pointed directly at the street and your front lawn can help you stop a break-in before a thief gets a chance to enter your home. We looked around and found video doorbells with a mix of features aimed at different people in different living situations. Whether you’re a homeowner or a renter, live in a house or an apartment, here are some options to consider.

What You Need to Know Before Buying a Video Doorbell

There are many factors to consider when choosing the right doorbell camera for you; below are the most important ones, which we considered while we were researching this list.

Resolution: The most important technical spec of a video doorbell is its resolution. The higher the resolution, the clearer the picture. You’ll want the best-looking video possible in case of a break-in, because it’s the piece of evidence you’re going to review, and possibly turn over to the police. All of the cameras on this list capture video in HD (either 720P or 1080P), so you’ll get a very high-quality recording of any suspicious activity.

Smart home integration: All smart video doorbell cameras have the ability to send you alerts when they sense motion, and send a live video feed to your smartphone, tablet, or computer at all times. But many also integrate with smart home platforms like Amazon’s Alexa, allowing you to arm or disarm the camera with just your voice.

Durability: Your video doorbell is going to stay outside constantly, so it’s going to need to be designed to withstand the elements without getting damaged. The durability of technology is measured on the IP (Ingress Protection) scale, which tells you how susceptible it is to dust and water. Any rating above an IP64 means the gadget is capable of being exposed to rainstorms without the risk of serious damage. All of the cameras on this list have a higher IP rating than that though, so they shouldn’t fail due to inclement weather.

Power source: A video doorbell can be powered one of two ways: by connecting it to the existing wiring from your current doorbell, or via an internal battery. Using a battery-video doorbell does mean you’ll have to recharge it once or twice a year, but it’s worth the minor inconvenience since it allows you to place your camera anywhere on your property.

Subscriptions: Some video doorbells security cameras require you to pay a monthly or annual subscription fee to store video clips in the cloud, so you can view them later. Video clips are taken each time the camera senses motion. You’ll always have the option to save a video clip to your phone if you catch the notification on your phone when motion is detected without paying the fee. A subscription allows you to review clips if you miss that notification. 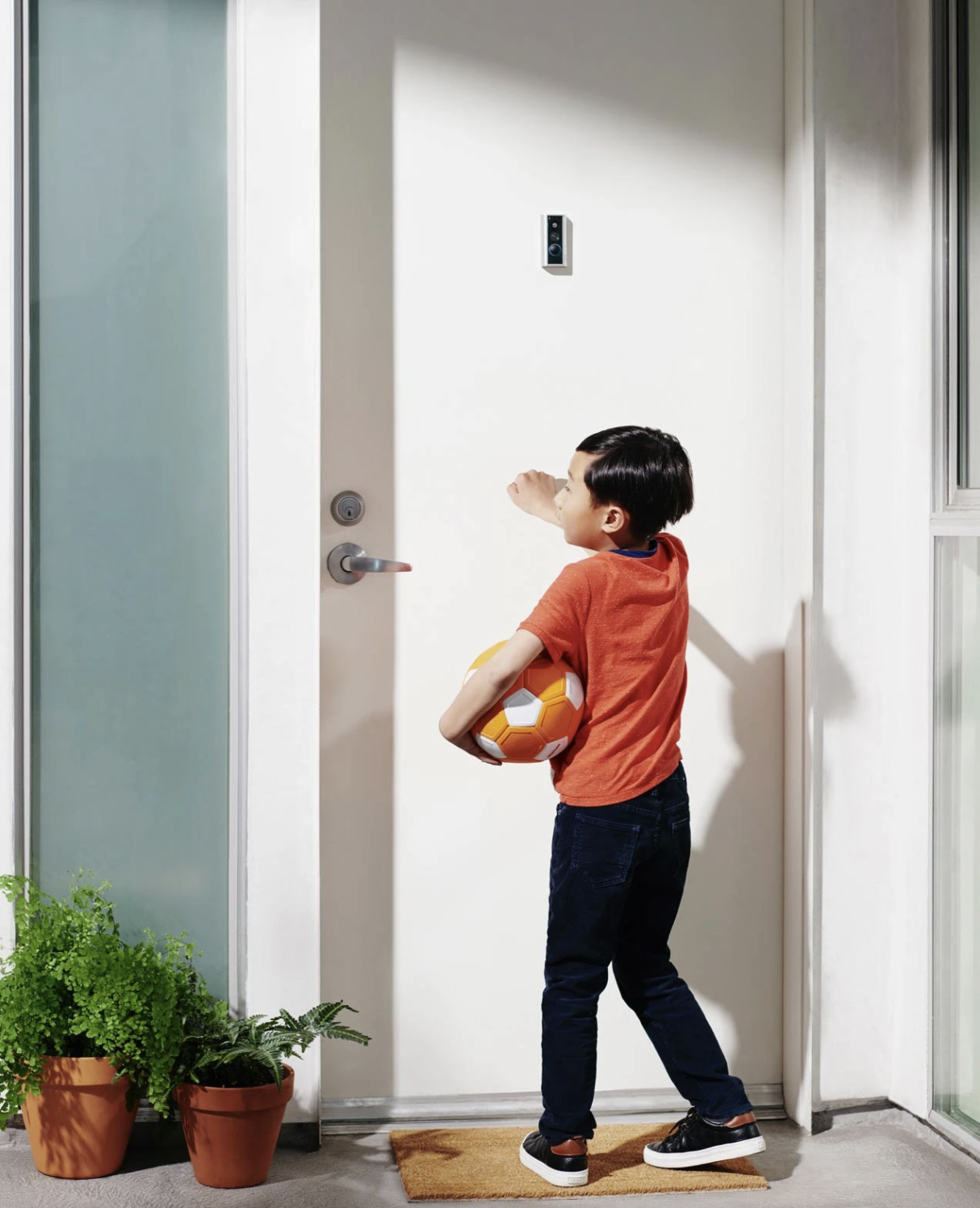 If you live in an apartment building, there’s a good chance your doorbell is in a vestibule, or connected to a single keypad shared by all tenants.

But that doesn’t mean you’re out of luck when it comes to video doorbells. Ring’s peephole cam fits — surprisingly enough — in the peephole of your door. It can capture video at 1080P, has a night mode to monitor your hallway in the evenings, and a 155° field of view. You should get a good picture of your entire hallway, which, if you’re lucky, means seeing a lot of your across-the-hall neighboor’s door.

The Peephole Cam will send you alerts each time it senses motion, and has a two-way microphone, so you can communicate with a would-be thief caught in the act, or someone in your building checking if you’re home. This doorbell runs on battery power, so you’ll have to charge it occasionally, but its battery pack is on the inside of the door, which makes it inaccessible to a burglar.

Ring was acquired by Amazon in 2017, so all of its security and lighting hardware is deeply integrated with its Alexa smart-home platform. You can ask Alexa to arm or disarm the Peephole cam, or get a live view on an Amazon device like the Echo Show or Fire TV. This video doorbell is currently bundled with an Echo Dot, making it the best value in this guide, especially if you’re just starting your smart home.

This camera only has one real fault: it requires you to have a paid Ring Protect plan to keep videos in the cloud. You’ll get a notification on your smartphone when it detects motion, but if you miss that alert, you won’t be able to review the footage later. A Ring Protect plan costs $3 per month or $30 per year and includes 60 days of cloud storage.

Still, if you live in an apartment and want a video doorbell to keep an eye out for package deliveries or suspicious activities, this is your best choice. 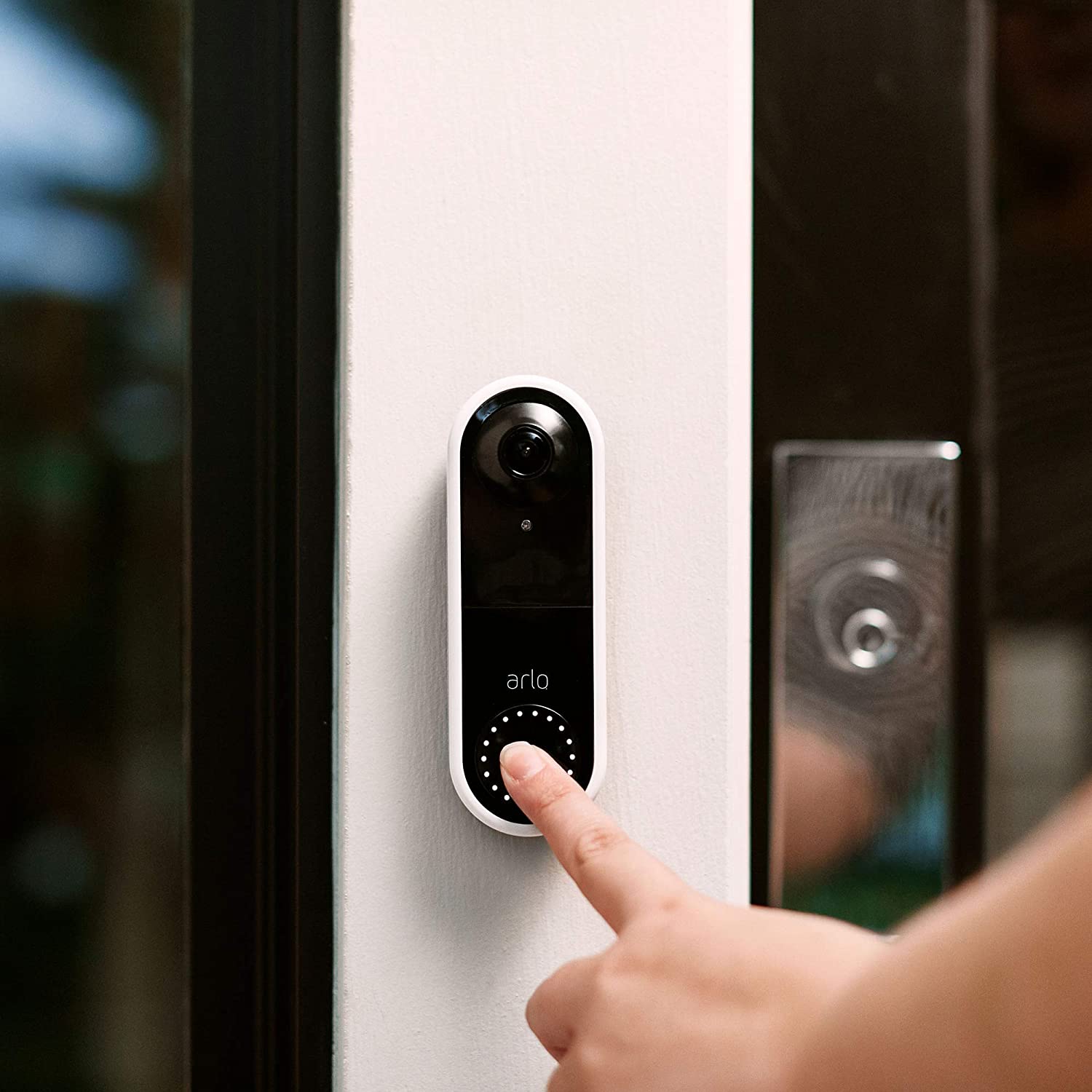 If you’re looking for a slim, affordable video doorbell for your home, Arlo’s latest model is worth checking out.

It can capture video at 1080P, has a night mode to monitor your home after the sun goes down, and a two-way camera, so you can communicate with anyone at your front door. Because this is an outdoor camera, you’re more likely to get motion alerts from delivery people, or friends and family dropping by. If you’re not home, you can alert these people by setting a prerecorded message to play for them.

Three big features make Arlo’s camera stick out: It supports HDR (high dynamic range) video capture, which will make its footage much more vibrant (the more detail, the better), and a 180° field of view. If you have a large front yard, being able to see the entire thing will make a big difference; it prevents a thief from walking along the parameter of your property to the back door. Finally, the camera has a built-in siren, which you can use to alert intruders that they’ve been caught.

Arlo’s camera has the same suite of smart features as Ring’s Peephole Cam: it can be enabled or disabled by Alexa, and you can get a live view from an Echo Show or Fire TV.

It’s feature-rich, but Arlo’s Video Doorbell has a couple of potential downsides. First, it needs to be connected to your existing doorbell’s wiring. That’s fine if you own your home, or are savvy with electrical work, but may not work for renters.

Second, it requires a cloud subscription called Arlo Smart to save your clips in the cloud. A subscription costs $2.99 per month, and includes perks like person, vehicle and animal detection, so you don’t get pinged every single time the camera senses motion.

These drawbacks shouldn’t be a deterrent from an otherwise great camera, but they’re definitely worth thinking about.

Cons: Needs to be connected to wiring, requires a cloud subscription, no durability listed. 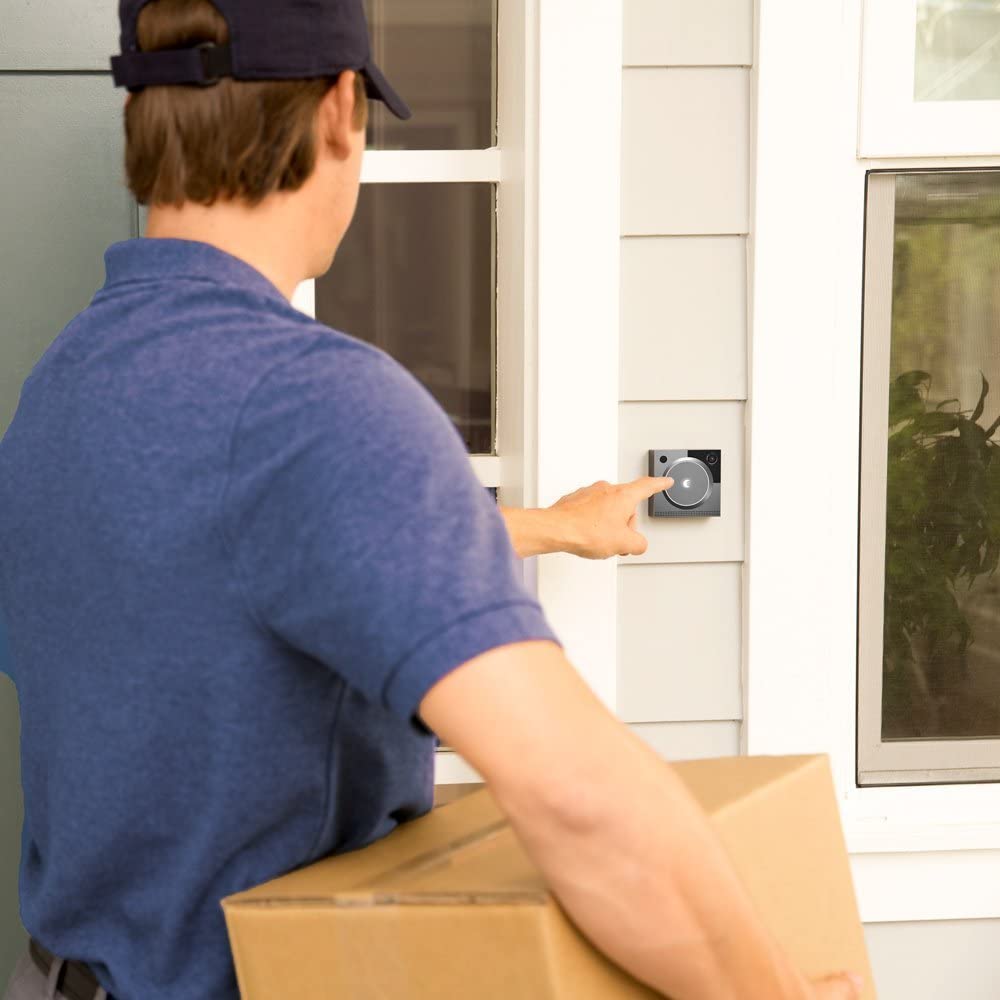 August has made a name for itself by making well-received smart locks, but its video doorbell is great in its own right.

It can capture 1080P video, has a two-way microphone, and has the same suite of smart features as the other cameras in this guide: it can be enabled or disabled by Alexa, and you can get a live view from an Echo Show or Fire TV.

What helps August’s Doorbell Cam Pro distinguish itself is its built-in floodlight, which allows it to get super clear, full-color footage in the dark. This is a feature that’s become standard on some outdoor security cameras, but isn’t common on a video doorbell. Triggering this will send a signal to a burglar that the house has some sort of security system.

The company has also integrated the Doorbell Cam Pro with its other smart-home accessory: the August Smart Lock. If you have them both, you can see who’s at your door, and if appropriate, let them in remotely. This is a great feature to have if a friend drops by to drop something off, and you don’t feel comfortable with them leaving it on your front porch or stoop.

While this doorbell generally meets or exceeds expectations on the tech spec side, it only has a 120° field of view. This doesn’t matter if you have a smaller front yard, but may not be the best fit if you’ve got a large one. It also requires hard wiring, so you may not be able to use it as a renter. These nitpicks should be considered, but aren’t deal-breakers, especially when you weigh them against the free cloud storage and built-in floodlight. 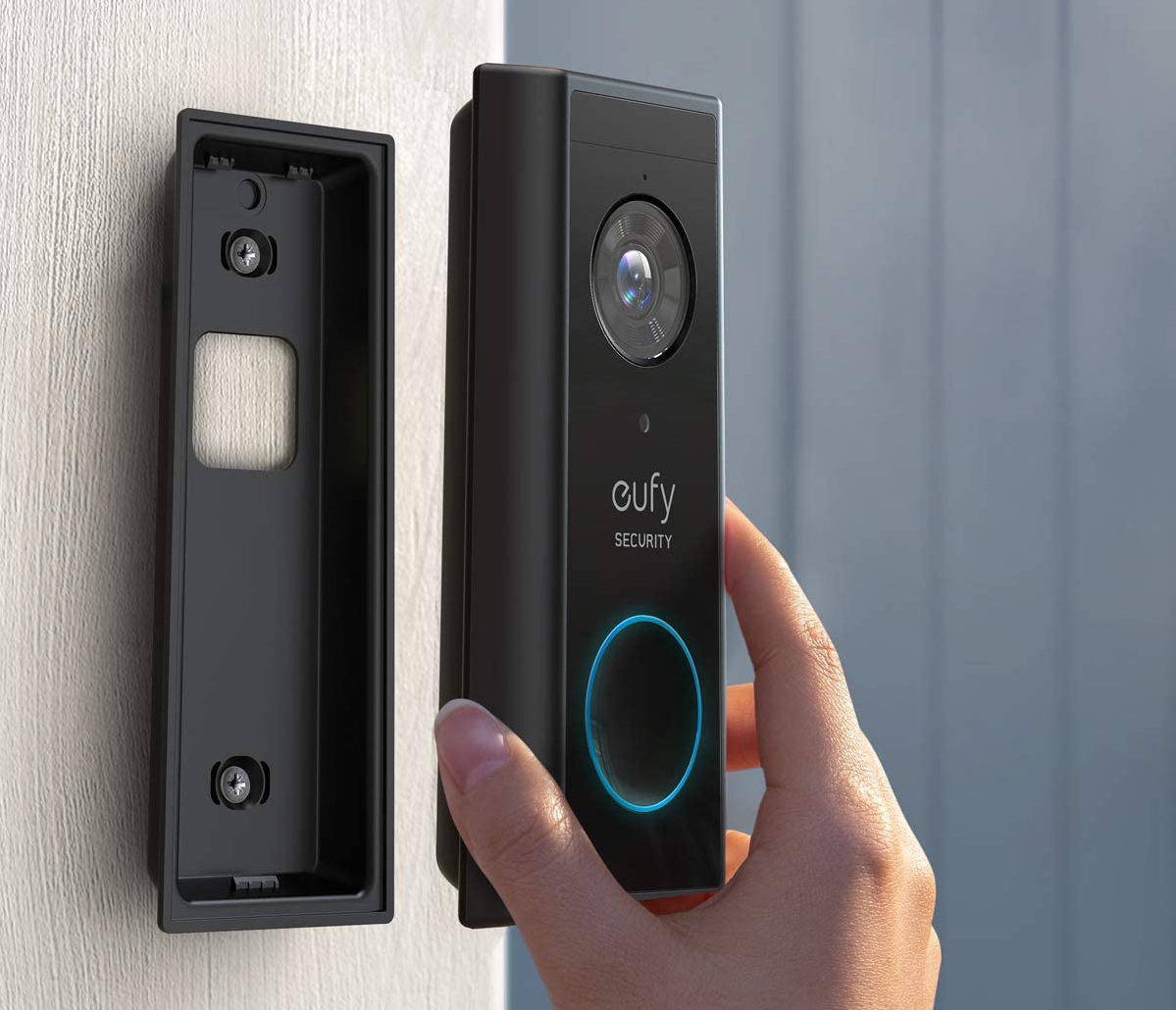 If you’re looking for a luxe video doorbell with virtually no compromises, eufy’s Wireless Video Doorbell is the answer.

It’s the only pick in this guide that captures video in 2K, which is better than HD; the additional clarity alone makes it a serious contender. It has a night vision mode, two-way microphone, 4:3 aspect ratio, and a battery eufy says lasts up to 180 days per charge. It’s also earned an IP65 durability rating, which means it should fare well in bad weather. Like the other cameras in this guide, eufy’s integrates well with Amazon’s Alexa, so you can watch a live video feed on your Echo Show or Fire TV.

To cut down on the number of unnecessary notifications, the camera can automatically detect when people are at the door, and allows you to set customized zones, so you don’t get pinged each time a car goes down your street. This convenience feature will really pay off if you live in a busy neighborhood.

This camera’s double-edged sword is its external hub called the HomeBase, which needs to be plugged into an outlet in your home. It’s a mild inconvenience, but it actually enables a great feature: local video storage. Instead of charging you a monthly fee for a subscription plan, Eufy’s hub keeps video clips (up to 16GB worth) on a memory card inside the HomeBase.

It’s hard to argue with this camera’s high resolution and local storage option, which help put eufy’s option in a league of its own. Having to dedicate an outlet to an additional accessory may be annoying, but it’s worth the hassle.

Note: Eufy has two models of this doorbell; I’m recommending the battery-powered one because it’ll work with the greatest number of living situations, but there is one you can hardwire if you prefer that.