After appearing on everything from Designated Survivor to Young Sheldon, Mckenna Grace makes a shocking debut as Mrs. Keyes, a 14-year-old wife of an aging commander who takes in June (Elisabeth Moss) in the first two episodes of The Handmaid’s Tale season 4. Speaking with ET, Grace, as well as series creator Bruce Miller, opens up about her role this season and what’s to come for the young rebel.

Joking that Grace has a resume longer than his, Miller says that the actress was such a great addition to the ensemble. “She’s a mini Lizzie,” he says, referring to Moss and revealing that Grace “won the role” after beating out several other teenage stars who auditioned for the series.

“She brought so much in the role. And, in all honesty, she’s so good at being scary,” he continues, adding, “she was comfortable being so awful.”

In the first two episodes, June and the surviving handmaids, Janine (Madeline Brewer), Brianna (Bahia Watson) and Alma (Nina Kiri), take refuge at a farmhouse, where Keyes nurses June back to health after being shot.

“Something great about Mrs. Keys, that was really fun to play, was her split personality,” Grace says, describing Keyes as suddenly going from anxious and nervous, with a cigarette in her hand, to resolute and determined to fight, especially when confronting June.

“Although she is the wife and the mistress of this household, she has been having to grow up and mature so quickly in this whole Gilead place,” she adds. “So, she’s still childish, but already her maturity is above the regular 14-year-old.”

While sympathetic to the cause, the commander’s wife takes a stern hand with the stowaways, especially Janine. It’s soon revealed that she’s a fighter and survivor of her own, not only raped by her husband but by men he hopes will impregnate her.

“It was really fun to play the different moments, where one minute I’m standing up and I’m smacking my hand across Janine’s mouth. Like, ‘Don’t spit that out,’” Grace says, referring to the dinner scene in the barn after sacrificing a pig to feed her guests. “And then the next, where I’m crying and just telling June all these things that have happened to me.” 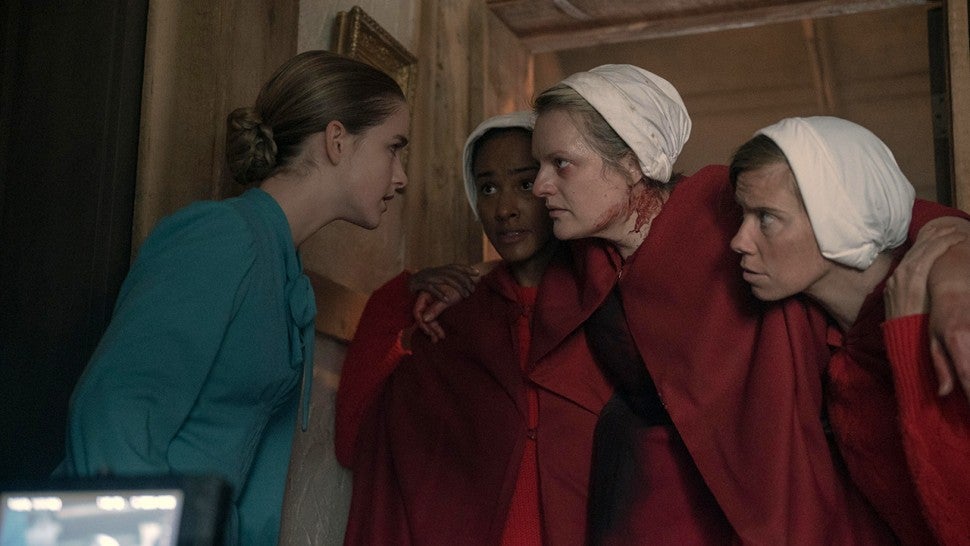 Although it might be easy to look at Keyes and think of her as just a victim, Grace says she is so much more than that. “She has this deep, complex story and she’s doing all of these things to figure it out for herself. She has been fending for herself all this time alone in Gilead, stuck with this commander and all of these different men.”

Eventually, it’s revealed that Keyes has been poisoning her husband in order to save herself from rituals and she later teaches June how to make the concoction from the plants in her greenhouse so that the former handmaid can assassinate various commanders at a nearby Jezebel.

And in a test of Keyes’ loyalty and ability to fend for herself, June pushes her to slaughter a captured guard who previously raped her. While audiences don’t see Keyes kill him onscreen, she next appears covered in blood as she crawls into bed with June.

“I really do love that scene because you see Mrs. Keys as this stronger individual, but as it goes on, she has these cracks and breaks because of this whole whirlwind of things going on beneath the surface,” Grace says. “So it’s nice to be able to see her get to cuddle up and just be safe in that moment.”

Wanting to go with the handmaids as they continue their journey, Grace says Keyes “wholeheartedly believes in June. She really hopes and believes that June can fix this for me.”

After June returns from the Jezebel, she finds that the farmhouse is empty and none of the women are anywhere to be seen. And in that moment, June is captured by Gilead while it’s unclear what ultimately becomes of Keyes, especially for her participation in stowing fugitives in her home.

However, it’s not the last audiences will see of her. “I’m very excited for my return. It’s quite dramatic,” Grace says. “In true Handmaid’s Tale fashion, everything is dark and dramatic.”

New episodes of The Handmaid’s Tale debut Wednesdays on Hulu.