Olympic gymnast Jordan Chiles will have her mom, Gina Chiles, rooting for her as she goes for the gold at the Tokyo Olympics despite Gina’s impending prison sentence.

Gina previously pled guilty to one count of wire fraud and was sentenced to one year and one day in prison back in November 2020, per E! News. She was scheduled to start her sentence on July 27, however, she was able to push back her prison start date to August 26, according to the unopposed motion filed in Oregon on July 13 obtained by the outlet. This way her sentence won’t interfere with Jordan’s first Olympic games, which will run from July 23 to August 8.

The motion filed by Gina’s legal team, which asked for a 30-day extension to her start date so that the mother can “support her daughter throughout the Olympics and for some time beyond,” was granted by Judge Michael W. Mosman.

Gina was since released from police custody and will remain free until her extended prison start date due to the “substantial change [in] Mrs. Chiles’ family’s circumstances,” according to the motion. Her lawyers argued that the extension, “would give Mrs. Chiles’ daughter at least some additional time to have her mother’s emotional support and guidance during such a monumental time her young life.”

Keep scrolling for more details about why Jordan Chiles’ mom is headed to prison. 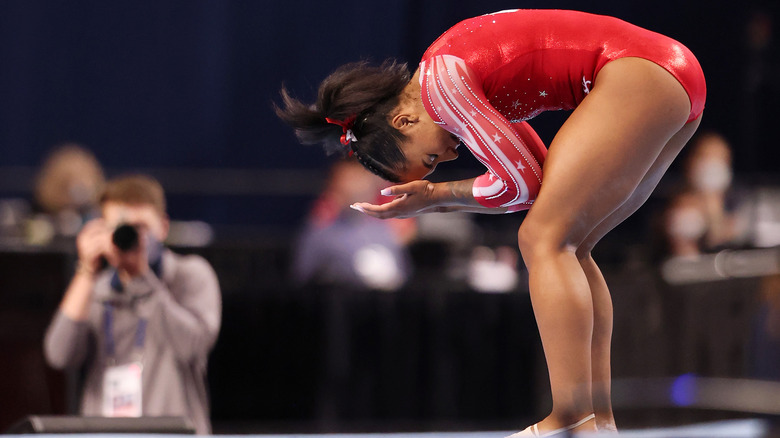 Ahead of Jordan Chiles’ Olympic career, her mother, Gina Chiles, had stolen $1 million from clients through her property management business, Inspire Vision Property Management LLC, per E! News. According to her plea agreement, per the outlet, Gina admitted to swiping the funds from 2014 to 2018. She confessed that a part of her “scheme” was to “diverted client funds for her personal use and did not use the funds as promised.”

According to the motion to extend Gina’s prison start date, she has no prior criminal record and she’s demonstrated “extraordinary acceptance of responsibility” since her legal woes.

“Mrs. Chiles’ has greatly appreciated the additional time to support her daughter,” her lawyer noted.

“Every moment that I watch Jordan is the most amazing moment as a mom,” Gina told Hoda Kotb on a July 15 appearance on the “Today” show. “And so I just am looking at it as not bittersweet, but just a sweet period that she’s here.”