Being in former President Donald Trump’s inner circle is a bit like Heidi Klum’s catchphrase on “Project Runway” — one day you’re in, the next day you’re out. During his presidency, Sen. Mitch McConnell seemed like he was Trump’s number one fan (sometimes), but what is their relationship really like? Is McConnell heading to Mar-a-Lago for weekend golf trips with the erstwhile POTUS? Or are they now nemeses?

Now that Trump is no longer the president, it looks like the relationship between the two politicians has changed somewhat. To set the stage, right now it looks like Trump could be considering running for president again in 2024. Meanwhile, McConnell is still in the Senate, but since the Republican party is no longer in the majority, he’s hard at work to make sure they still have some power. Also — there was that whole insurrection and impeachment business. So are they still working together?

Here’s what we could find out. 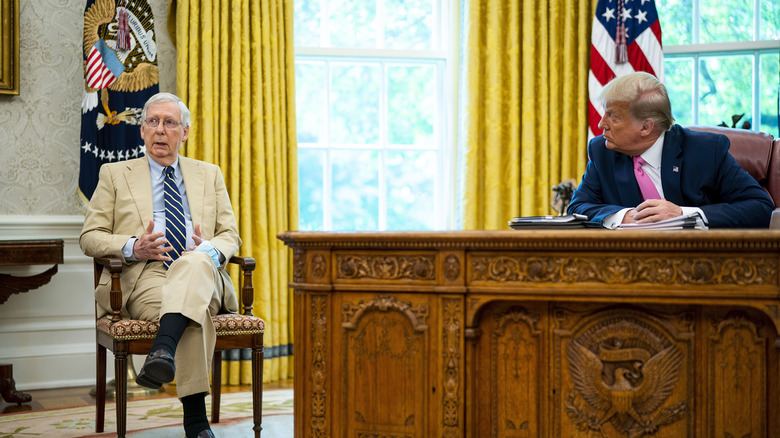 Over the weekend, former President Donald Trump railed against Senate Minority Leader Mitch McConnell, accusing him of endorsing a senate candidate Trump does not like and calling him an “Old Crow.” For his part, McConnell sorta shrugged off the insult, calling it an “honor.”

But this is not the first time that Trump has come for McConnell. Even though McConnell didn’t vote to convict Trump in his second impeachment trial in January, Trump apparently didn’t think the senator was strong enough in his support. After McConnell released a statement condemning Trump’s behavior, Trump released a statement of his own, calling McConnell, “a dour, sullen, and unsmiling political hack,” according to NBC. Then, at a donor event in April, Trump called the Kentuckian a “dumb son of a b*tch” and a “stone cold loser,” NBC reported. Not that McConnell wants anything to do with Trump anymore either, as he has made clear in recent statements.

So yeah, not exactly besties.