As confirmed by his manager Kara Welker, the comedy legend passed away on Friday, August 6, leaving his wife Aimee Carlson and his son August with ‘a tragic and sudden loss.’

AceShowbiz –Trevor Moore has passed away at the age of 41. The passing of the comedian, who was also the co-founder of the sketch comedy group The Whitest Kids U’ Know, was confirmed by his manager Kara Welker who declared that it was due to “a tragic accident.”

Kara issued a statement on behalf of his wife Aimee Carlson and his family to Deadline. “We are devastated by the loss of my husband, best friend and the father of our son,” the statement read. “He was known as a writer and comedian to millions, and yet to us he was simply the center of our whole world. We don’t know how we’ll go on without him, but we’re thankful for the memories we do have that will stay with us forever.”

“We appreciate the outpouring of love and support we have received from everyone,” the statement continued. “This is a tragic and sudden loss and we ask that you please respect our privacy during this time of grieving.” According to the outlet, Trevor died after an accident on Friday, August 6 night.

Mourning his death were The Whitest Kids U’ Know co-founders Zach Cregger and Sam Brown. On Saturday night, they issued public statements on their Twitter accounts following their friend’s sudden passing.

“There isn’t really anything I can say that will cover the place he had in my life. He was a one of a kind. A brilliant and kind man. I’ll miss you forever buddy. @itrevormoore,” wrote Zach. In the meantime, Sam shared, “Making @itrevormoore really laugh always gave me a sense of accomplishment. I’m so lucky i got to spend the last 20 years trying to get good at that.” 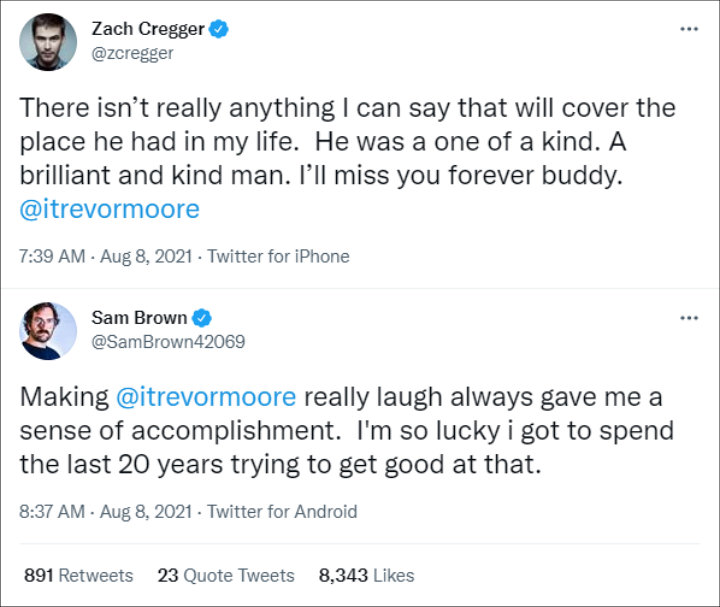 Zach and Sam also shared a joint statement regarding Trevor’s passing on the website for the group’s upcoming animated movie “Mars”. “Early this morning, we learned that we lost our brother, our collaborator and the driving force behind WKUK. He was our best friend, and we speak for all of us in saying that the loss of Trevor is unimaginable,” they wrote.

“We are heartbroken and our grief pales in comparison to the loss felt by his wife and son. On behalf of WKUK, we ask for privacy during our time of profound grief, and strength for his family who are dealing with the impossible thought of living life without him,” the message went on. “Our hope is that friends, fellow artists, and fans that loved him will not focus on his death, but will remember the countless moments of laughter he gave them.”

Trevor began his career in the late 1990s as the host of “The Trevor Moore Show”, which was a public-access show in Charlottesville, Virginia. After moving to New York in 1999, the comedy legend interned with Lorne Michaels at “Saturday Night Live” and co-founded The Whitest Kids U’ Know with Zach, Sam, Timmy Williams and Darren Trumeter.

Trevor is survived by his wife Aimee and his son August.