The cameraman, who dated the late singer for nine years, was last seen alive in June 2005 when he went on an overnight fishing trip with 22 other people.

He disappeared while on board, and his absence wasn’t noticed until the boat returned to dry land. He was 48. 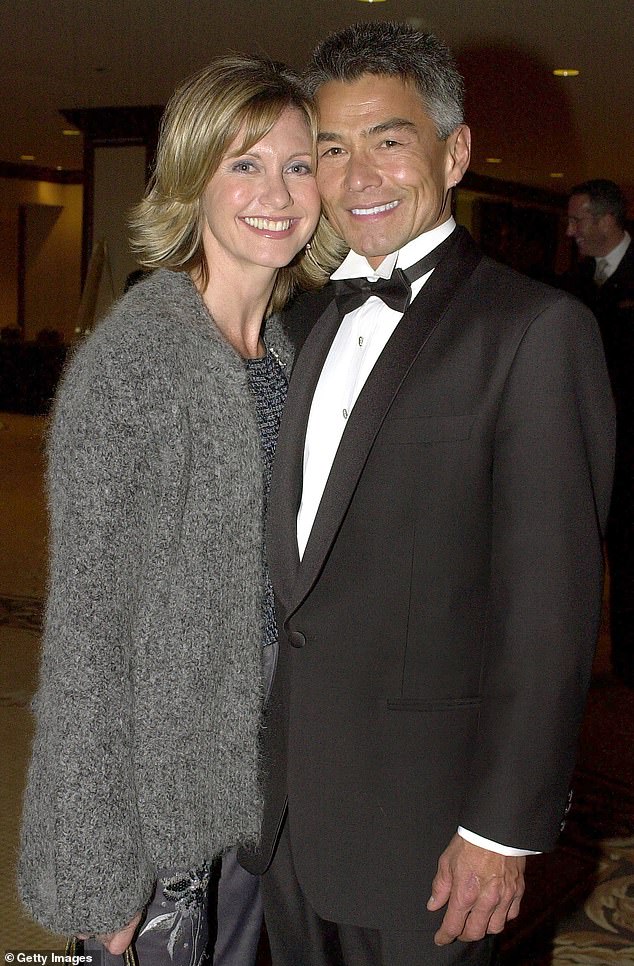 Many questions still surround McDermott’s disappearance, with wild theories he may have faked his own death for a new life in Mexico to avoid paying taxes.

‘I don’t think I will ever really be at peace with it,’ Newton-John admitted to Women’s Weekly magazine in 2009.

‘I think there will always be a question mark.’

The Grease star began a nine-year on-off romance with McDermott following her 1995 divorce from her first husband Matt Lattanzi. 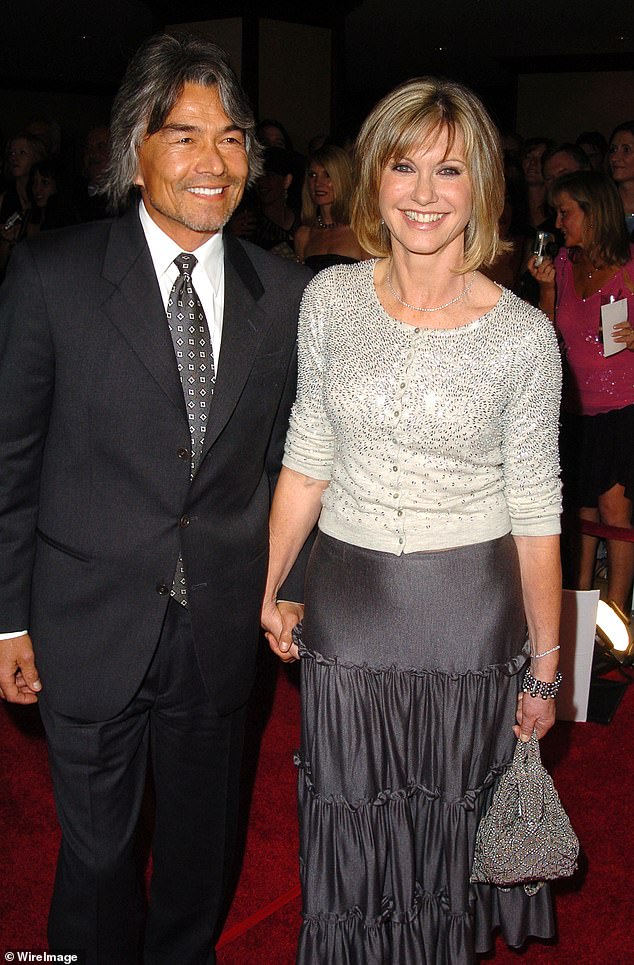 Newton-John was on a promotional tour in Australia when McDermott disappeared.

Crew on his fishing boat ‘Freedom’ had found his car keys, passport and wallet on board the boat and his car was found parked at the San Pedro marina in Los Angeles.

But still no-one realised he was missing until he failed to appear at a family event on July 6, with police finally called in on July 11. 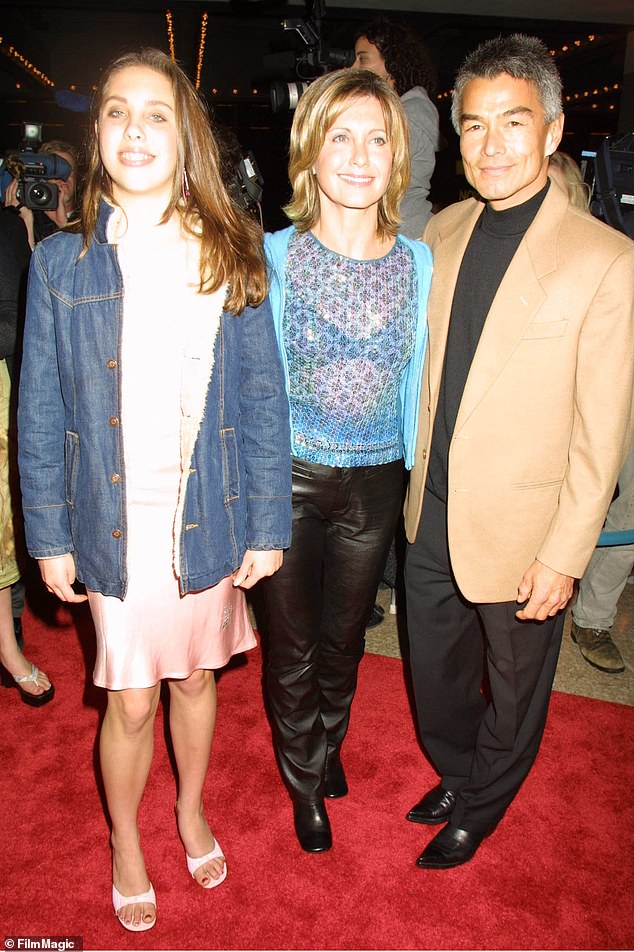 By then though the trail had gone cold – and investigators turned up nothing.

Prior to dating Newton-John, McDermott had been married and fathered a son, and was court-ordered to to pay $8000 in backdated child support.

He had filed for bankruptcy with debts of more than $30,000, prompting speculation he’d faked his death to escape and start anew.

A Coast Guard inquiry admitted at the time they ‘did not find any evidence of criminal action, suicide, accident or hoax in the disappearance of McDermott’. 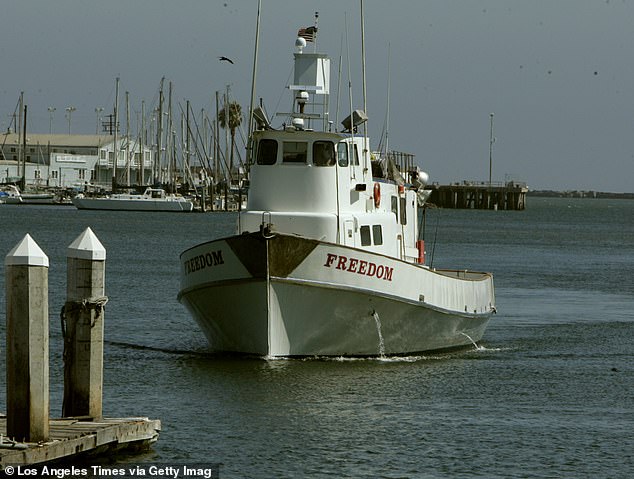 Patrick McDermott, 48, went on an overnight fishing trip with 22 other people on June 30, 2005, but vanished before the boat ‘Freedom’ returned to dry land 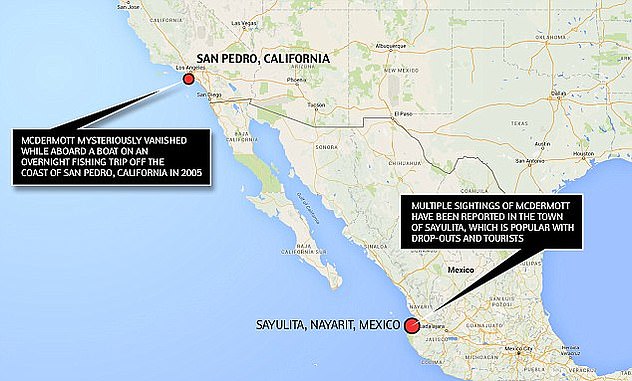 Patrick is rumoured to be in hiding in Mexico, on the run from crushing debts and said to be living on a yacht off the coast at Sayulita

A three-year probe into the ‘Freedom’ fishing boat found it didn’t carry out any head counts on the day of the trip, causing McDermott’s disappearance to go unnoticed.

Both probes concluded McDermott was likely lost at sea during the night and had likely drowned. He has been presumed dead ever since.

However, a manager at the San Pedro marina where McDermott boarded the boat is convinced he did not die on the fishing trip. 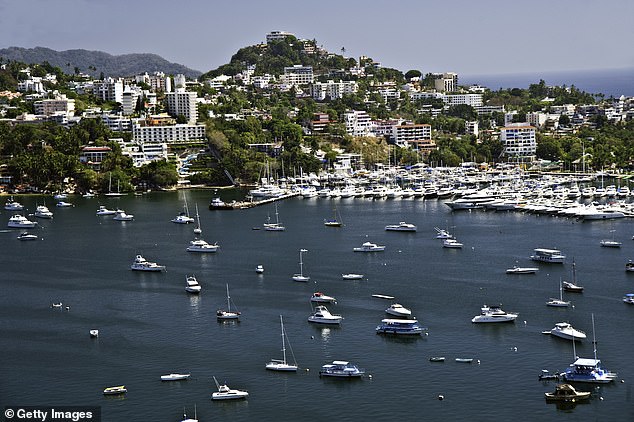 ‘He might have been kidnapped by aliens in the parking lot, but he got off the boat.’

‘Look, if you really want to jump, you jump when someone is not looking and you’ll never be seen,’ he added.

The mystery took another turn when a fisherman from the trip, said he met McDermott on board and just 3.5 hours into the trip, never saw him again.

‘I kept an eye out for him all day long, but never saw him,’ fisherman Tony Mayo said. 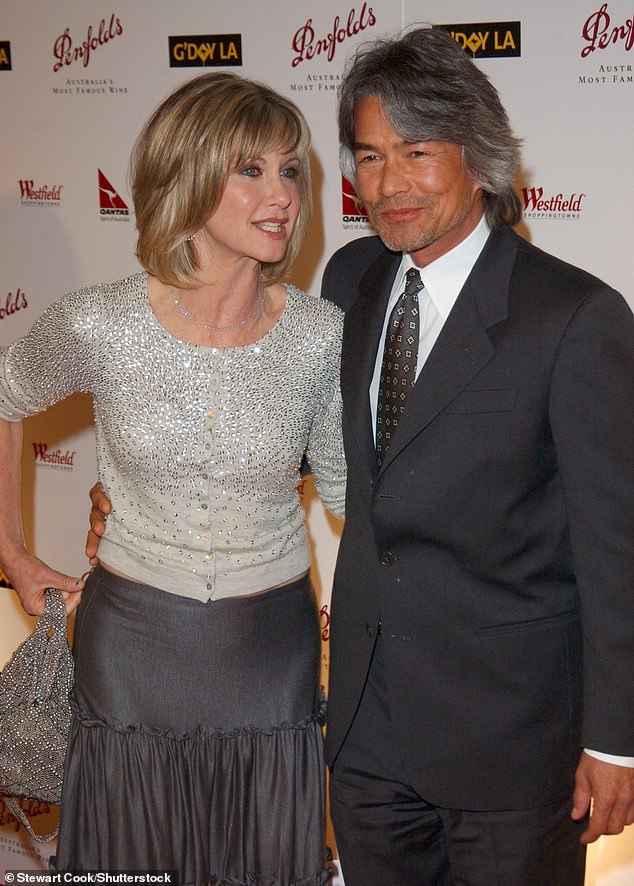 A Coast Guard concluded at the time that McDermott had likely drowned. He has been presumed dead ever since

Since the incident, there has been speculation by conspiracy theorists that he staged his own death amid financial troubles and to free himself from child support payments.

At least six witnesses came forward within a year after McDermott’s disappearance to say they had seen him alive and well in Mexico. Meanwhile, he reportedly resurfaced in Mexico in 2010.

Photographs of a man and a woman said to be the Hollywood crew member and his new lover in Mexico were also published in 2017 by New Idea magazine. 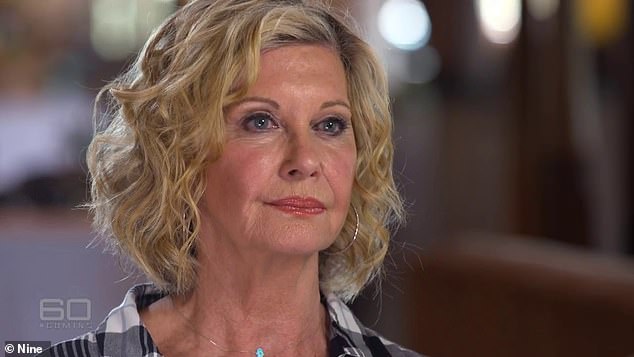 ‘He was lost at sea, and nobody really knows what happened,’ Newton-John told 60 Minutes in 2016. ‘Those are the things in life you have to accept and let go. Of course questions always come up and that’s human’

But the claims were undone weeks later when a Canadian couple came forward to say they were the people in the photograph.

According to CBS, a private investigator claimed he found the missing man.

‘Patrick’s probably now working in the yachting industry for a high-profile family down there,’ he said.

Olivia Newton-John put the tragedy behind her, meeting future husband John Easterling and marrying him at an Inca ritual in Peru in 2008. 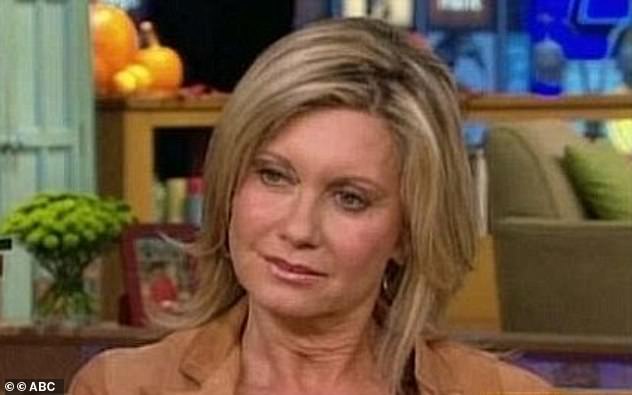 Olivia Newton-John put the tragedy behind her, meeting future husband John Easterling and marrying him at an Inca ritual in Peru in 2008

But the mystery continued to haunt her in the years that followed, although she had resigned herself to the fact McDermott was most probably dead.

‘He was lost at sea, and nobody really knows what happened,’ Newton-John told 60 Minutes in 2016.

‘It’s human to wonder. Because whenever you go through difficult times, there’s always those concerns.

‘Those are the things in life you have to accept and let go. Of course questions always come up and that’s human.

The Grease star died peacefully at age 73 last week after a brave battle with cancer.

Olivia’s husband John announced her death on her Facebook page on Monday, August 8.

‘Dame Olivia Newton-John (73) passed away peacefully at her Ranch in Southern California this morning, surrounded by family and friends.

‘We ask that everyone please respect the family’s privacy during this very difficult time.

‘Olivia has been a symbol of triumphs and hope for over 30 years sharing her journey with breast cancer.

‘Her healing inspiration and pioneering experience with plant medicine continues with the Olivia Newton-John Foundation Fund, dedicated to researching plant medicine and cancer,’ he said.

The actress famously beat breast cancer twice but was diagnosed again in 2017. 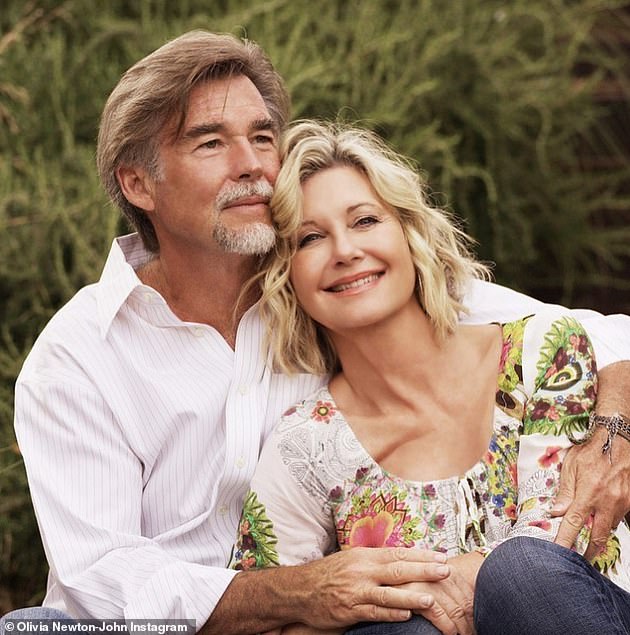 Just days before her death, Olivia Newton-John posted a heartwarming photo to Instagram with her husband John Easterling 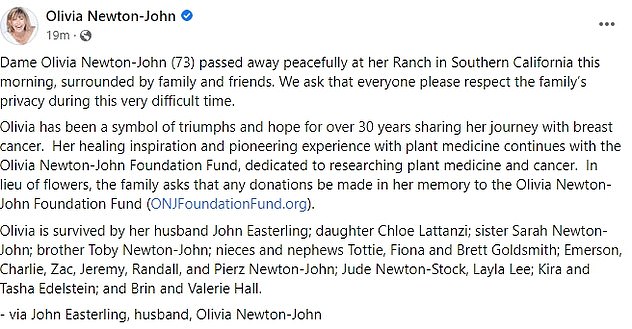 Newton-John’s husband announced her death on her Facebook. She was 73

He vanished on an overnight 22-hour fishing trip on the boat ‘Freedom’ out of  San Pedro marina in Los Angeles on June 30, 2005.

The boat’s crew found his car keys, wallet and passport on board after all the other passengers disembarked the following day, and his car was found parked nearby.

The crew hadn’t done a headcount so no-one noticed he was missing for another week when he failed to turn up for a family event, with police alerted almost a week later..

Since then speculation has raged about what happened to him, with investigators unable to find any evidence of a crime, suicide, hoax or an accident on the fishing trip.

Officials believe he simply fell overboard and drowned, but conspiracy theorists insist he may have had another boat lined up to meet him offshore.

Others believe he may have planted his belongings on the boat before slipping off, possibly before it even left port, without any noticing.

Private detectives set up a website FindPatrickMcDermott.com to try to trap the missing American into giving himself away, identifying the location of everyone who accessed the site. 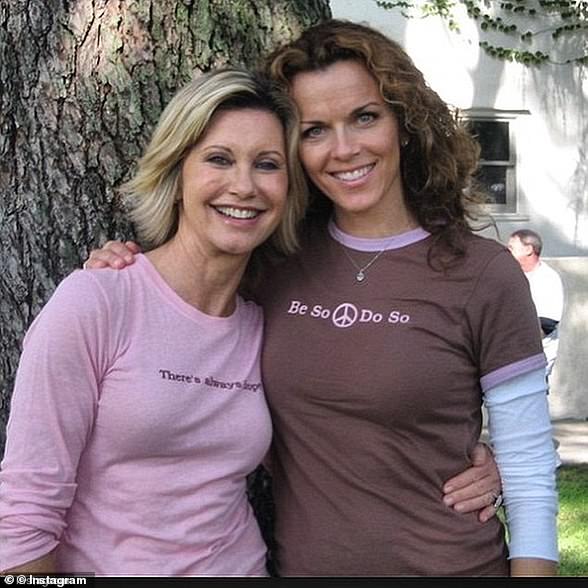 A flurry of web traffic from the  Sayulita area of Mexico’s West Coast sparked a hunt for him there without any success.

Others say they spotted him living on a yacht off the coast of Acapulco, 1000km further south.

One investigator claimed to have found him and spoken with him in 2009, claiming he just wanted be left alone but the claim was unsubstantiated.

Another claimed to have categoric proof he was alive and was on the verge of revealing it – but never did.

Over the years there has been at least 20 sightings of him in Mexico and Central America, but many have proved false.

One set of pictures of a couple alleged to be the distinctive looking McDermott – who was half-Korean and adopted at the age of two – turned out to be a Canadian couple.

His ex-wife Yvette Nipar, the mother of their son Chance, begged for the speculation to end for the sake of their child.

She pleaded with Amazon CEO Jeff Bezos to block the publication of a book by private eye Philip Klein about her ex’s disappearance.

‘My son has been through enough emotional torment over this,’ Nipar wrote, branding Klein a ‘serial liar’.

‘He has yet to be able to move on.due to Mr Klein’s continual effort to keep him in the public eye.

‘Let him rest in peace.’