Willow Smith and De’Wayne were seen with their arms wrapped around each other and sharing a kiss on the cheek while hanging out on the sand under the sun.

Willow Smith, 21, and De’Wayne, 26, fueled romance rumors during their latest outing. The singers got cozy with each other while enjoying some fun under the sun on Miami Beach, FL and looked as happy as could be. At one point, they both had their arms around each other while standing on the sand, and De’Wayne even sweetly showed more affection by kissing Willow’s cheek.

During the beach visit, Willow wore a black and white sports bra and maroon and white tie-dye sweatpants and black boots while De’Wayne went shirtless while wearing black pants with white stars all over them. The latter also rocked sunglasses that went great with his look as the two of them also engaged in a conversation that brought on some smiles. 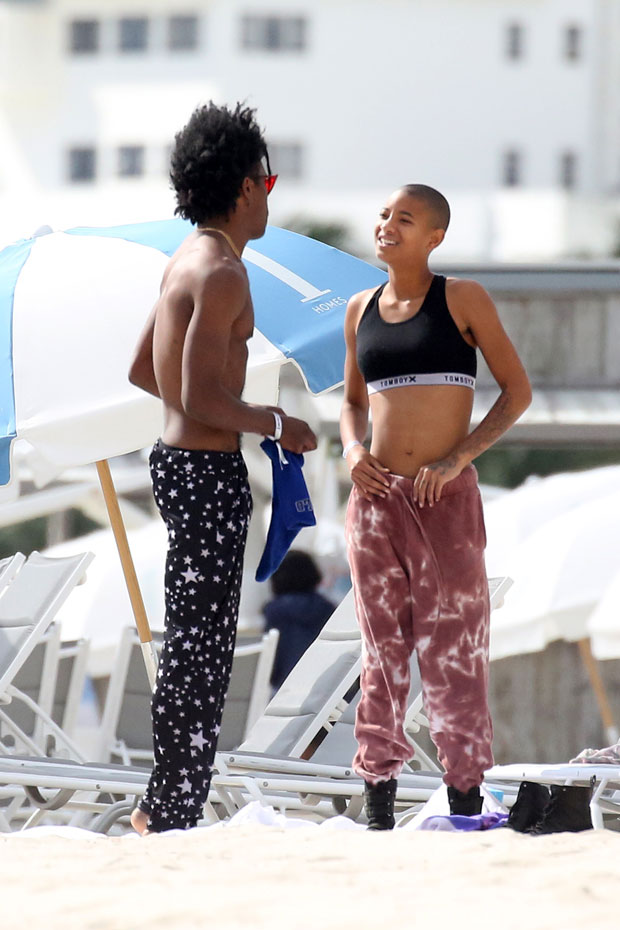 In addition to showing off PDA and talking, Willow was seen being tested for what appeared to be COVID with a cotton swab as she sat in a lounge chair, TMZ reported. A woman with gloves was kneeling down next to her and putting the swab in her mouth as De’Wayne looked on.

It’s unclear if Willow and De’Wayne are dating or not, but the two have been touring with each other across the U.S., so it seems like the perfect opportunity to get to know each other. The daughter of Will Smith and Jada Pinkett Smith has also been romantically linked to Tyler Cole and has said in the past that she’s polyamorous, so it’s definitely possible she’s enjoying a connection with both men.

When Willow’s not spending time relaxing with friends, she’s working hard in her music career and her talk show, Red Table Talk, which she appears on with her mom. The ladies often discuss personal topics on the show and in Apr., Willow made headlines when she admitted she has “the least sex” out of all her friends. “In my friend group I’m the only polyamorous person and I have the least sex out of all of my friends,” she said while explaining the reasons being polyamorous isn’t “just centered around sex” for her.

“With polyamory I feel like the main foundation is the freedom to be able to create a relationship style that works for you and not just stepping into monogamy because that’s what everyone around you says is the right thing to do,” she added.