Kemp Powers had no film credits in 2018, when he was summoned to Pixar Animation Studios in Emeryville, Calif., to give notes on a secret work in progress. During the flight from Los Angeles, the playwright and former journalist reviewed 40 minutes of rough storyboard footage sent by Pete Docter, the Oscar-winning director of “Up” and “Inside Out.”

“It was very cloak-and-dagger,” Powers said, adding, “You sign a whole ton of N.D.A.s.”

Three years into the making of “Soul,” the movie’s lead character, Joe Gardner, had evolved from a white actor to a Black jazz pianist who — with his life hanging in the balance — discovers his reason for living. Docter and the screenwriter Mike Jones are white, and they needed help: The first Black protagonist in the studio’s 34-year animation history had to feel specific and authentic.

Powers eventually left Emeryville as the only Black co-writer and co-director of a Pixar film to date. Meanwhile, “One Night in Miami,” using a script he wrote based on his own play, was charging into production, with Regina King making her feature directing debut. Now both films are opening on Dec. 25 — “Soul” on Disney+, “Miami” in theaters before streaming next month as an Amazon original — and both are awards contenders. But Powers’s collaborators are still learning just how much of himself he put into the movies.

“Some of my idiot friends have been jokingly calling it Kemp-mas,” said Powers, 47, wearing a mask in his new backyard in the Baldwin Hills neighborhood of Los Angeles. Later that week, he would meet a writing deadline for Barack and Michelle Obama’s Higher Ground Productions and Netflix, then resume meetings about a film he’s directing for the “Lego Movie” team of Phil Lord and Christopher Miller.

“I’ve had a year that writers, creatives in Hollywood don’t get to have, ever,” he said, but noted that it’s come during one of “the darkest times in our country’s history” and added, “It’s a bittersweet year.” 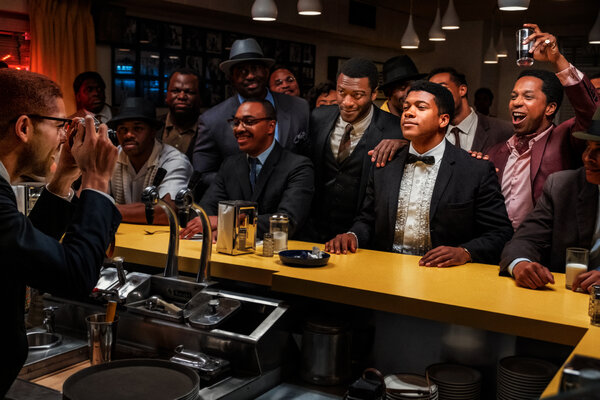 AT THE CENTER of “Soul” and “Miami” are men reborn once they stop hiding parts of themselves from the world. During his 17-year media career, Powers distanced himself from his harrowing past by telling other people’s stories. Then he distanced himself from colleagues ridiculing the creative writing that occupied his nights and weekends. To find his voice, Powers had to cover his ears.

Sharing a name with his grandfather and great-grandfather, Kemp Willis Powers was born the fourth of five children, and the eldest son, growing up in the Brooklyn neighborhoods of Coney Island, Kensington and Flatbush. When he was 4, his parents separated and the kids stayed with their mother, Evelyn, a full-time retirement-home nurse and a captain in the Army Reserves. His father, James, drove a chartered bus for tourists and aging rock stars. (He died of lung cancer in 2003.)

The much-older sisters started enough trouble that one summer a Molotov cocktail exploded on the family’s doorstep. Still, Powers, who dreamed of growing up to be a firefighter and worked on a “Soul” shot recalling that dream, treasures the borough of his youth: Chinese handball games before school, kung fu movies at the drive-in. He might have remained a lifelong Brooklynite if not for a tragic accident on April 14, 1988.

Against his mother’s wishes, Powers brought two friends home from school while she was at work. In his bedroom, he showed the boys — Powers calls them Chris and Henry — a .38-caliber revolver she kept in an armoire. As a joke, Powers mimed inserting a bullet and aimed at Henry, firing off an actual shot. Powers ran to a neighbor for help, but the man refused, and it was too late. Both Henry and Powers were just 14.

Henry’s grieving parents declined to press charges, and a judge sentenced Powers to a year of counseling. He became obsessed with honoring Henry’s memory by achieving enormous success. On his 16th birthday, his criminal record was erased.

Powers finished high school in Virginia, attended Howard University and worked jobs without mentioning Henry to his peers. During college, he helped create the short-lived publisher Flatline Comics. The first comic he wrote, “Flatbush Native,” starred a superhero who could activate his powers only by ending a life.

In 2000, a comment by the city’s mayor at the time, Rudolph W. Giuliani, motivated Powers to write about Henry. A police detective, Anthony Vasquez, had recently killed a 26-year-old father, Patrick M. Dorismond, outside a bar on the West Side. Dorismond’s arrest for robbery at age 13 prompted Giuliani to say the victim was “no altar boy,” even though Dorismond had been an altar boy.

He became another dead Black man with a record, Powers wrote in his 2004 book, “The Shooting: A Memoir.” “I could one day unwittingly find myself on the receiving end of some misunderstood person’s knife, bullet, or worse. If that happened, would the people having those post-mortem conversations describe me only as a juvenile felon?”

After publication of “The Shooting,” Powers began researching a second book based on a historical tidbit: Immediately after winning his first world heavyweight championship in 1964, Cassius Clay spent the evening secluded in a hotel room with Malcolm X, Sam Cooke and Jim Brown. Each titan found himself at a major crossroads: Malcolm X was preparing to leave the Nation of Islam, Brown was readying to depart the National Football League, while Cooke and Clay were primed to emerge as public activists. As Powers fantasized about eavesdropping on their conversation, he realized he could do just that with a play.

“One Night in Miami” has been staged on three continents, garnering prizes and an Olivier Award nomination. Powers’s agent sent the text to Pixar, along with a script he had since written for “Star Trek: Discovery.” At the same time, two companies, ABKCO Films and Snoot Entertainment, partnered to produce an adaptation and Powers wrote the screenplay, encouraging producers to seek out a new or first-time director.

King had been accumulating television directing credits (“Scandal,” “This Is Us”) when she read the script.

When it comes to representation in cinema, “we don’t get the opportunity to see our men, Black men, shown the way we see them so often in our family members and friends,” King said by Zoom, adding, “Like every other human being, they’re layered. They are vulnerable, they are strong, they are providers, they are sometimes putting on a mask. They are not unbreakable. They are flawed. They are beautiful. And just Kemp captured all of that in, you know, less than 110 pages.” She started video conferencing with Powers while she shot “Watchmen” in Georgia. “I told him that I felt like you’ve written a love letter to Black men.”

Powers braced for King to lose interest after her Oscar triumph for “If Beale Street Could Talk.” That didn’t happen. “Talk about salt of the earth,” he said. “She could have done, God knows, anything.” (King ultimately made history with “Miami,” becoming the first Black woman to direct a Venice Film Festival selection.)

During their talks, Powers’s 12-week “Soul” contract morphed into more than a year of five-day weeks at Pixar, and weekend trips to Los Angeles to see his teenage son, Mingus. (He is divorced and also has a 22-year-old daughter, Mackenzie.) Rather than merely polishing the script, he was being consulted for recommendations on casting, set design, editing, music and marketing.

When a character designer asked Powers about hairstyles for the female employees at a tailor shop, “I pulled up a picture of my mother wearing a bob wig,” Powers said. When he saw the scene later, “I was like, ‘Oh, my God, you made that character look like my mom.’”

“He’s got a razor-sharp mind for specifics of actors and directors and roles,” Docter said, noting that Kemp recommended hiring the “Hunt for the Wilderpeople” actress Rachel House, “The IT Crowd” star Richard Ayoade and the Roots bandleader Ahmir “Questlove” Thompson to provide voices for the film. “He’s also a guy who’s not just going to talk to hear himself talk,” Docter added, explaining that the writer saves his feedback “to really pack a punch.”

Powers spoke up early when Docter said “Soul” was not about the Black experience but about issues of mortality. The director’s concerns were centered on potentially upsetting people from religious backgrounds, Powers explained. “I was like, ‘I don’t think you have to worry about the religion, it’s race,’” Powers recalled. “The wonderful thing is, you know, they listen.”

Docter said he wanted to focus the movie’s narrative on a man in his mid-40s because that’s a time when the feeling you can't change careers sets in, and you’re “stuck for the rest of your life.” Powers had similar anxieties upon entering his fifth decade. Despite a reporting career that included stops at Newsweek and Reuters, Powers’s last journalism position was thankless and mostly invisible — front-page senior news producer at Yahoo. After his dismissal, he did contract work for AOL, fulfilling the same responsibilities without the benefit of health insurance.

All along, “Miami” the play was progressing, and its first Equity production was scheduled in Baltimore. But Powers found himself in the hospital, “fighting for my life” after having an allergic reaction to Tamiflu. He learned that he had rhabdomyolysis, a deadly syndrome that causes muscle tissue to disintegrate, filling the bloodstream with harmful protein that can cause organ failure.

“I had a very terrifying week when I was prepping to write notes to my kids, who didn’t know that I was ill because I didn’t want to tell them,” he recalled.

Instead of celebrating the play, in January 2015, Powers’s mother and siblings kept a bedside vigil. Not long before, his eldest sister, Sheila, had collapsed and died from an untreated ulcer. To lose another family member so soon would be shattering.

Powers remembered calling AOL to explain “I’m in the hospital. I can’t work today,’” and the company responding that it would find someone to cover his absence, adding, “just let us know when you’re done.” As Powers tells it, he thought at that moment, “I would not be missed.” All his hard work, his years as a loyal journalist “and no one would miss a beat, no one would even know.”

Powers decided to tell the stories he wanted to tell as a full-time artist. Soon his observations as a Black man, a father of two and a survivor of a traumatic childhood will usher complex Black characters into millions of homes. And his home corresponds with that of a mover and shaker — a stone fireplace gazing up at beamed ceilings, a kitchen blue screen for video interviews, a magnificent vista of a canyon and hiking trail. In Pittsburgh, the City Theater just announced the Kemp Powers Commission Fund for Black Playwrights. As an entry in the Pixar canon, “Soul” will probably be watched for years to come. He’s found a level of success befitting Henry’s memory, yet he winces when his friend is mentioned.

“I collapsed under the pressure of that,” he said, explaining, “I was killing myself. Quite literally killing myself, emotionally and physically. And I failed. And the me that emerged from that failure — I’m still a tightly wound, determined guy — but I kind of emerged from it fearless.”

He came to a realization: “I know that my life and my opinion have merit now.”

Then he goes inside his beautiful home and takes off his mask.