A 20-film retrospective in New York of the filmmaker Dario Argento’s work shows why he’s had audiences jumping out of their seats for nearly five decades.

Dario Argento, 81, at home in Rome this month. His latest film, “Dark Glasses,” has some of his trademark touches.Credit…Elizabeth Bick for The New York Times

ROME — For a man who has spent nearly 50 years scaring the pants off movie audiences, the Italian director Dario Argento does not come across as frightening at all.

Soft-spoken, even a bit reserved, Argento was anxious to wrap up a recent interview so that he could see his grandchildren — the offspring of his daughter, the actress Asia Argento — before traveling the next day to New York, where “Beware of Dario Argento: A 20-film Retrospective” is running at Lincoln Center through June 29.

“I won’t see them for a while,” he said of the children, before shooing his interviewer out the door. Hardly the modus operandi of a “master of horror.”

But that doesn’t mean that Argento, 81, is not still up for a bit of mayhem or gore. 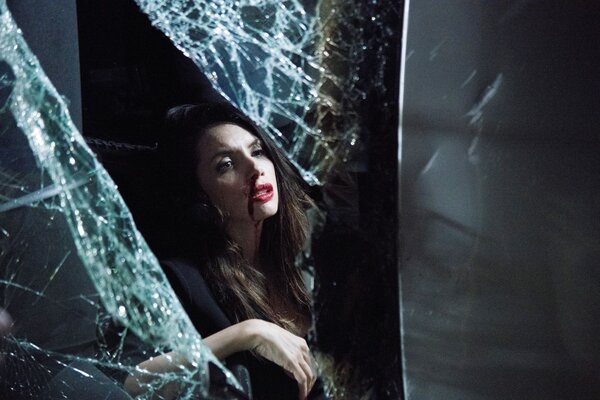 His most recent film, “Dark Glasses,” which premiered in February at the Berlin International Film Festival and had its North American debut in the Lincoln Center retrospective, delivers classic Argento moments: throbbing music that usually bodes badly; gruesome, blood-oozing murders; nail-biting chases (this time involving a blind protagonist); and plenty of plot twists. Yet the film is also surprisingly tender: At its heart is a relationship between a woman and a young boy whose lives intertwine through tragedy.

“The film is different from others that I’ve made,” and the finale even has room “for a little tear,” Argento said in the antiques-stuffed living room of his home in an upscale Rome neighborhood. A bulging bookcase along one wall was littered with some of the many awards he has won during his long career.

Two recent additions are prizes he picked up in August at the Locarno Film Festival in Switzerland. One was a lifetime achievement award that was presented to him by the director John Landis, who said at the ceremony that he had insisted on giving the prize to Argento in person. The other was in recognition for his debut acting role in “Vortex,” Gaspar Noé’s moving film about the decline of an elderly couple. (Argento had a bit role as an altar boy in a 1966 movie, but it was uncredited.)

It’s quite a career arc for a man who first worked as a journalist and then film critic for a left-wing Rome newspaper; co-wrote the story for Sergio Leone’s classic “Once Upon a Time in the West” (1968) with Leone and Bernardo Bertolucci; collaborated with George A. Romero on the zombie apocalypse classic “Dawn of the Dead” (1978); and recently wrote two books — an autobiography, called “Fear,” and an anthology of scary stories, titled “Horror” (2018).

Argento said that he got his first scare as a small child when his parents — his father was a film producer, his mother a famous photographer — took him to see a production of “Hamlet” in Rome. When the ghost of Hamlet’s father appeared, young Argento went “into convulsions,” he recalled, and yet he was also intrigued. “A seed was planted and it grew,” he said.

And it continues to grow. The day after his work on “Vortex” was done, Argento was at work on “Dark Glasses,” whose filming had been delayed by the pandemic. The movie is an Italian “giallo” film — a broad genre that can contain elements plucked from murder mysteries, detective crime or horror, including the slasher subgenre. Argento is the living master of giallo movies.

True to form, the deaths in “Dark Glasses” are in-your-face violent, starting with the garroting of a female prostitute early in the film. Brutally murdered women are a troubling leitmotif in giallo movies, though Argento countered that he had also “killed off plenty of men” in equally gruesome ways.

And, he added, he had written courageous female roles, too, especially those portrayed by his daughter Asia, who was his leading lady for many years. “She’s played many strong characters,” he said.

Argento burst onto the Italian movie scene in 1970 with “The Bird With the Crystal Plumage,” a stylish and visually lush giallo film that established him as a rising cinematic star and garnered him the nickname “the Italian Hitchcock.”

“Argento’s films are often full of these surprises, these twists,” said Russ Hunter, an expert in Italian films who teaches at Northumbria University in northern England. But Argento also brought to the screen a “kind of bravura visual style” that went on to influence other filmmakers and to establish him as a cult director with die-hard fans, Hunter added.

With “Deep Red” (1975), one of his most celebrated films, Argento used kinetic camerawork and lush visuals to build drama (not to mention the special effects of Carlo Rambaldi, who went on to win three Oscars). In “Suspiria” (1977), light and color do the trick. “There’s such a fantastic use of color saturation, which creates an otherworldly ambience,” Hunter said. Contrasts in colors create moods that are “unsettling and uncanny,” he added.

Argento said that even if the worlds he creates seem flamboyant and stylized, that is just for show. “Inside, at the core, there is truth, something real, something deep that comes from inside me, from my dreams, from my nightmares,” and these visions reverberate with people, he explained.

Though he said that he had never undergone psychoanalysis, Argento noted that he holds Sigmund Freud in high regard and visits his home in Vienna whenever he is in the city, “looking at the couch that so many have lain on.”

Luigi Cozzi, a director who has worked with Argento on several films, recalled that it took him three months to find a camera that could create an effect that Argento wanted for a slow-motion car crash in the finale of “Four Flies on Grey Velvet.” Eventually, Cozzi found a camera that shot 3,000 frames a second — used to monitor the wear and tear of wheels on trains — at the University of Naples and rented it. The scene was about a minute and a half long.

“Another director would have made do with something else — not Dario,” Cozzi said in an interview in a Rome shop called Profondo Rosso (Italian for Deep Red) that he opened with Argento in 1989. The store is chock-full of horror paraphernalia, books and movies, as well as masks and fake limbs, and it also houses a museum dedicated to Argento, featuring objects from the director’s films (in the basement, naturally). Argento pops in frequently and makes a scheduled appearance every Halloween, Cozzi said.

“Dario innovated the language with which horror films were made,” Cozzi added.

Jason Rockman, one of the hosts of a Montreal radio station who visited the store recently while on vacation, agreed.

“There’s everything in his films, mystery, but also this stylized vision, the sense of dropping in on an exact moment that you’ll never see again,” Rockman said. He was disappointed, he added, that he wouldn’t be able to make it to Turin, where the National Cinema Museum is hosting an Argento exhibition until Jan. 16.

Of the 20 Argento films being shown at Lincoln Center, 17 are premieres of high-definition restorations done at Cinecittà, Italy’s national film company.

“We wanted to celebrate Dario Argento,” who is experiencing a “rediscovery with a new generation of critics” said Chiara Sbarigia, the president of Cinecittà, which co-produced the New York retrospective. “We wanted him to have an official recognition, as well as a recognition of our work and the work of our restorers,” she added.

Argento said that he probably wouldn’t stick around for the screenings.

“I don’t like to see them again. The ones that I’ve made, they’re done,” he said. “Now I am thinking of new things.”