One film genre often seems to be simultaneously exhausted and inexhaustible. The romantic comedy may be mocked for its cookie-cutter plots in which the path of true love runs with only an easily digestible lack of smoothness into the sunny land of forever, but customers take heart from the fact that every cookie is reliably the same.

Critics observe that whatever you think of the rom, there is never much com. Is there a single line in Love, Actually – despite Hugh Grant’s best efforts – that actually makes you laugh?

But it doesn’t matter. Fans watch it over and over, taking a wallow in that lovely warm bath of love, pain, forgiveness and joy as each couple in the film’s series of vignettes finds its sweet spot of togetherness.

An Unexpected Love was a rare opening-night hit at last year’s San Sebastian Film Festival, where it duly buoyed the market with sales to most of the world. It has been a runaway success on home turf in Argentina, where it was the second-biggest-selling home-grown film of the year (after the gripping El Angel). It is definitely a romcom. But while its story of a couple’s ups and downs follows the usual trajectory, it turns plenty of odd corners along the way that have more to do with human observation than bringing two celebrity dates together. 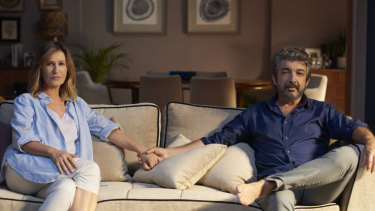 This has partly to do with their age: Marcos and Ana are a married couple in their 60s, with a lot of baggage to unpack. More than that, however, it is to do with writer and director Juan Vera’s field of vision. He cites mid-period Woody Allen and the sparkling comedies of Howard Hawks and Billy Wilder as ongoing influences, but the director who was his spirit guide while working on An Unexpected Love was Francois Truffaut. “Especially the Antoine Doinel saga. I studied his films and those of Eric Rohmer: people talking about love and relationships, but in depth.”

Like Jean-Pierre Leaud in those films, Marcos and Ana (Ricardo Darin and Mercedes Moran) are facing life questions rather than love troubles. “We joked on the shoot that this was an ‘existential comedy’,” Vera told Variety magazine. “There’s something to that.”

I don't really get what went wrong with you.

At the outset, Marcos and Ana congratulate each other as they wave their adult son Luchi away at the airport, as he flies the nest for a university in Spain; they have succeeded, they agree, in doing exactly what parents are supposed to do. So now what? A free night beckons, with another free night to follow. They keep telling each other their itchy impatience is nothing as banal as an empty-nest syndrome, but of course it is. With no ostensible future goal, their togetherness feels stuck.

“They need to feel insecurity,” says Vera. “They are not so comfortable with their predictable lives. They want to take risks with everything: with love, with work, with maybe living alone. Being comfortable works for them, but it’s not enough.”

It is an odd kind of discontent, full of a bitter humour – Vera always wanted it to be funny – that springs partly from the situations in which they find themselves and partly from their inability to understand why they’re in them. This is romcom stripped of its usual frosting of sentiment. Marcos moves into a friend’s flat, plays video games and eats a lot of takeaways; eventually, he is persuaded to go on Tinder dates, where he meets possibly the weirdest women in Buenos Aires. Ana is swept away by an obviously creepy perfume salesman, seduced by whatever he has slathered on his collarbone. They get an estate agent to value their flat and find reasons to send her away; how can they sell when they can’t get the harpoon they bought on holiday off the wall? 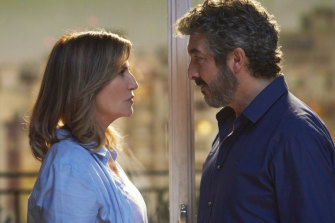 Mercedes Moran (Ana) and Ricardo Darin (Marcos) have a lot of baggage to unpack.

Luchi checks in by Skype from his distant new life. “I really don’t get what went wrong with you,” he says. Of course he doesn’t. Their nameless longings, says Vera, are rooted in their '60s childhoods.

“You know, that generation lived with the experience of the hippy movement, the hope of a new revolution that would change the world, the election of left-wing governments,” Vera says. “Our generation thought we were going to change everything and the failure of that experience, which we are experiencing at the moment, comes as a realisation that they are not going to change anything.”

Vera is 59. “Obviously, I have started feeling this myself,” he says. “Among the people I know, a lot split or divorced, looking for a new challenge or the opportunity to fall in love with someone else. But I am looking round me at people not only looking for that, but asking themselves, what is life? Why am I here? What am I doing? What are my dreams?”

Although they don’t realise it, the problem with Marcos and Ana is not their marriage.

“Each of them is closed in, living alone. They had grown up, started to work, to make a family and raise a child and forgot for a while all those expectations they had for their own lives. When their child goes away, they feel what has happened to them – not as a couple, but as individuals.” 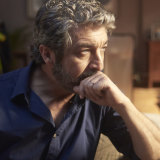 Ricardo Darin in An Unexpected Love

What immediately separates An Unexpected Love from most romantic comedy, of course, is that is not about the beginnings of love. There is no initial meet-cute; there are awkward moments, but it is the sort of awkwardness felt by people who know each other all too well. Nor is it about the love’s awful end.

“This is a film about a new beginning,” says Vera. “Some people say it’s an example of the comedy of remarriage, which is an American category. They categorise everything!”

The comedy of remarriage was identified by Harvard professor Stanley Cavell (Pursuits of Happiness, 1981) as a sub-genre of the screwball comedies of the '30s and '40s. At the time, the obvious advantage of making comedies about people in the throes of divorce was that it meant canny directors could wriggle around the restrictions of the Hays Code; sexual intimacy could at least be implied.

Now they are more notable for the crackling banter between the participants – “a thirst for talk”, as Cavell put it – and the vivid independence of their mature female characters. In Howard Hawks’ razor-sharp 1940 comedy His Girl Friday, for example, Cary Grant and Rosalind Russell play a divorcing couple of journalists reunited as they pursue a hot story.

“I wanted to have that spirit,” says Vera. “His Girl Friday is an amazing film; one day I want to make a film with a rhythm that free.”

Vera has spent his working life as a producer. He has also written comedies for the home market with titles such as Ten Days Without Mom.

“Maybe four or five years ago I started to think I wanted to direct a film,” he says. “And in the middle of writing this, I started to think, maybe I don’t want to give this script to another person to direct. I understood that I was the best director for it.”

His actors – Argentina’s finest and the ones he always hoped to cast – immediately understood it too. “It was easy,” he says, “because the script was so clear and they are the same age as the characters. It was easy for them to identify with them. And the questions they ask themselves, everyone has to ask.”