Humanity may lose the ability to sleep in this Netflix sci-fi thriller, but rest assured viewers won’t have this problem. 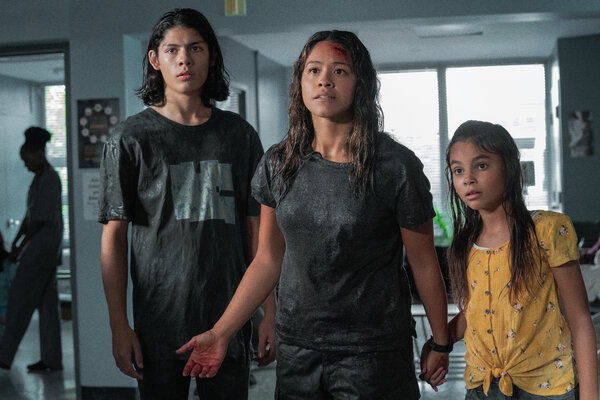 There is no getting around it: Mark Raso’s “Awake” is bad. But at least it’s so bad that it’s often ludicrously laughable: Netflix may well have a cult turkey on its hands.

Sleep deprivation is common nowadays. A disaster movie in which the condition spreads so much that it becomes an extinction event — because staying awake leads to exhaustion, impaired cognitive abilities, madness and, eventually, death — feels like a plausible waking nightmare for many viewers. It’s an intriguing premise that “Awake” quickly and fatally squanders.

It happens without warning: all electronics suddenly cease to function and nobody can fall asleep anymore. It takes only a couple of days for civilization to go to pot, with the obligatory tattooed dirtbags and freed felons roaming by-the-book desolate streets.

Oddly, 10-year-old Matilda (Ariana Greenblatt) seems unaffected and is able to catch some Z’s, much to the surprise of her mother, Jill (Gina Rodriguez, who got much better action in “Miss Bala”). Matilda soon attracts unwanted attention, first from a crazed religious congregation, then from Dr. Murphy (a slumming Jennifer Jason Leigh), an amoral military psychiatrist — the pastor and the doctor are equally reprehensible in this scenario.

The lack of explanation for the events (maybe it was some kind of “solar flare,” Dr. Murphy ventures) might have helped turn “Awake” into an apocalyptic fable à la “Blindness,” but the film is relentlessly, clumsily pedestrian.

Jill, who happens to be a vet, goes full mama bear to teach her kid how to survive. A gun can be used “not just for people but for animals, too,” she helpfully tells Matilda. As if that line weren’t chuckle-worthy enough, Jill conducts her firearm instruction in the middle of an abandoned library and almost hits her teenage son, Noah (Lucius Hoyos), who had been lurking in the racks. The new world is in safe hands.