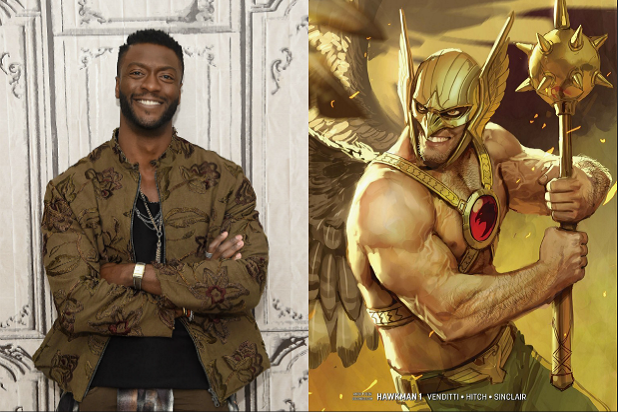 “Leverage” star Aldis Hodge is in talks to play the role of Hawkman opposite Dwayne “The Rock” Johnson in “Black Adam,” DC and New Line’s highly anticipated superhero movie, according to an individual with knowledge of the project.

Hawkman is the name of several DC Comics heroes, but the best known versions are the original incarnation created by Gardner Fox and Dennis Neville in 1940, and a rebooted version created by Timothy Truman in 1961.

The 1940 character was the alter-ego of archaeologist Carter Hall, who discovers he’s the reincarnation of an ancient Egyptian prince cursed and murdered by an evil priest. The 1961 version reimagined him as Katar Hol, an alien from the planet Thanagar whose costume is the uniform worn by his world’s police force, the “Wingmen.” An individual with knowledge of the project tells TheWrap “Black Adam” will feature Carter Hall, though specifics about the character are not known.

All versions of Hawkman are able fly using artificial wings made out of a rare alien metal that counteracts the laws of gravity, and take their name from their mask resembling, well, a hawk. The first look at how this will appear onscreen came Aug. 22 during Warner Bros.’ virtual Comic-Con alternative DC FanDome, courtesy of a pair of “Black Adam” backstory teasers introduced by Johnson. The clips, motion-comics created entirely using concept art, explain that millennia ago Black Adam was a citizen of an advanced ancient civilization chosen by the Council of Wizards — the same group whose last surviving member gave Billy Batson his powers in 2019’s “Shazam!” — to liberate his people from slavery.

However, Black Adam’s brand of Justice was too cruel and vindictive and in response, the Council imprisoned him, seemingly for all eternity. But 5,000 years later, he escapes and sets out to continue what he started. This time however, superheroes have emerged and four of them — Cyclone, Atom Smasher, Dr. Fate and Hawkman — unite as the Justice Society to oppose him. See how Hawkman looked in that concept art below, and read more about the teasers here. 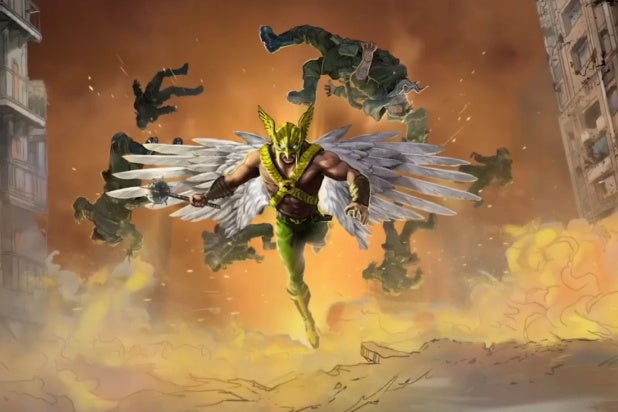 Hodge joins a cast which includes Noah Centineo who will play Atom Smasher, a character who can control his molecular structure with the ability to manipulate his size, strength and durability.

Jaume Collet-Serra, who also directed Johnson in Disney’s “Jungle Cruise,” is on-board to direct. Rory Haines and Sohrab Noshirvani wrote the latest draft of the screenplay, Adam Sztykiel wrote the previous draft. Due to COVID-19, it is currently unknown when the superhero movie is expected to go before cameras but the studio is eyeing a second quarter 2021 production start.

Beau Flynn of FlynnPictureCo. is producing with Johnson, Dany Garcia and Hiram Garcia of Seven Bucks Productions. Johnson, Collet-Serra, Flynn, Garcia and Garcia recently collaborated on Disney’s “Jungle Cruise” which is set for release on July 30, 2021. Scott Sheldon will oversee for FlynnPictureCo. and will also serve as executive producer.

Black Adam was created by Otto Binder and C. C. Beck in 1945 as one-time opponent of Shazam (Captain Marvel) during the character’s Fawcett comics era. Following DC Comics’ acquisition and revival of “Shazam” in 1973, Black Adam emerged as one of the DC universe’s most popular antiheroes and is now considered one of Shazam’s core arch enemies. The second New Line DC film following 2019’s critical and cult hit “SHAZAM!,” plot details about “Black Adam” are still under wraps.

Hodge, who was most recently seen in Amazon Prime Studios’ “One Night in Miami,” is best known for his starring roles on TNT’s “Leverage” and WGN’s “Underground,” as well as for his role as MC Ren in 2015’s “Straight Outta Compton.” Other credits include “Hidden Figures,” Universal’s “The Invisible Man,” and “What Men Want.” Hodge is repped by Paradigm, The Priluck Company, Ziffren Brittenham LLP and Viewpoint.
.